The Duchess of Malfi
Music by Torsten Rasch; libretto by Ian Burton after John Webster 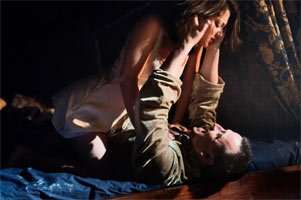 John Webster’s play is a great vehicle for the sort of interactive theatre that Punchdrunk has made its trademark, with its plot an excuse for all manner of ghastly goings-on. Mind you, it would have helped to have known the play in advance, because this collaboration between English National Opera and Punchdrunk, a reduction ad absurdum of the gruesome bits, was big on sensation and to hell with any strong narrative. It was given a sense of site-specific occasion by being performed in an abandoned office building in dreariest East London, and its dysfunctional atmosphere was ratcheted up no end by Torsten Rasch’s accompanying baleful score and sound effects. 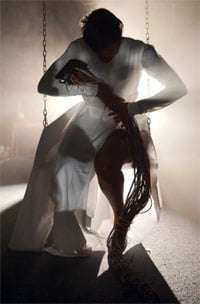 It was Punchdrunk’s most ambitious theatre-as-installation so far, filling three floors with areas for groups of musicians, a forest of trees that morphed into a graveyard full of crosses, a bar set up in the Loretto chapel (where the Duchess and her low-born husband seek refuge) and the various small offices dotted throughout the building, bursting with chilling details loosely suggested by the play’s plot of infanticide, other brands of murder, incest and other lusts – the usual run of Jacobean mayhem. If you were into dread and abandonment, you could have lost yourself for hours in these smaller spaces. In one room, a young man beckoned me to sit down, locked the door, then grabbed my hand and forced it into a hole in the floor – please don’t let it be full of something runny, sticky and warm – from which I drew a small book. Inside was a communion wafer, which he placed in my mouth. Beyond a loose connection with the play’s religious context (one of the Duchess’s brothers is a debauched cardinal) this was certainly interactive and disquieting. Another room was full of medical paraphernalia and drugs, with papers all over the desks covered with notes about lycanthropy (one of the Duchess‘s brothers thinks he is a wolf), porphyria and other blood diseases. The amount of detail was incredible – far more than you could ever take in – and the sense of dread pretty powerful; and, given the odd glimpse of semi-naked grappling, murkily erotic, performed with admirable sang-froid by the noticeably ‘fit’ cast of actors and dancers. 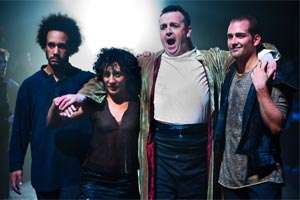 We all had to wear white bird-head masks with stumpy beaks, so as we bobbed and nodded through the baleful half-light, we all looked like we were pecking away at the spectacle, as though it was carrion, then suddenly all flocking towards the next flurry of violent action. To be honest, this sensation-seeking traipsing all over the building got very fatiguing, and it was a miscalculation to have a bar as part of the installation (with drinks served in ironically dinky cups and saucers), where people could relax and take their masks off, because it punctured the magnificent melancholy of the ambience.

The way in which the 350-strong was rounded up and herded back to the ground floor for the finale was masterly and seemed almost voluntary. The fragments of Torsten Rasch’s sumptuously gloomy score, which we’d heard throughout the two-hour evening very much as background music, coalesced into something quite grand and genuinely operatic, and the huge space, with a giant incense-burner swinging from the ceiling and scarlet-clad penitents in long, inquisitorial hoods, provided a suitably grandiose setting for the Duchess’s spectacularly staged death, to which all the mooching around elsewhere in the building had been directed.

Punchdrunk’s “The Masque of the Red Death” was much more focused, but the idiom of ‘immersive theatre’ was much the same. Words were spoken or sung, but you could have done perfectly well without them. The main singers – Claudia Huckle as the Duchess, countertenor Andrew Watts on unearthly form as the Duchess’s twin brother and Freddie Tong as the cardinal – were all excellent, and the ENO Orchestra, scampering gamefully from one location to another, played superbly for Stephen Higgins. But immersive and interactive though it set out to be, beyond a few moments of amazement it wasn’t involving. It was spectacle for the consumer, and if you like shock and awe, that was what you got.