The Firework-Maker’s Daughter
Children’s opera with music by David Bruce to a libretto by Glyn Maxwell based on the novel of the same name by Philip Pullman [ROH2 co-commission: London premiere; sung in English] 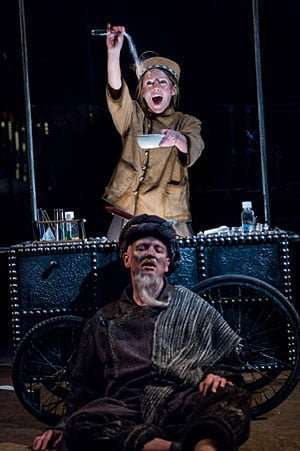 It is a curious fact that operas for children, who already have an enviable ability to conjure pictures from nowhere, are often far more inventive, daring and imaginative than operas designed for adults. This is certainly the case for The Firework-Maker’s Daughter, co-commissioned by The Opera Group and ROH2,bringing to vivid life a novel by Philip Pullman, which invites dramatic treatment.

Pullman first wrote the story as a school play, and refers to the book, which won the Gold Medal Smartie Award on its publication in 1995, as a fairy tale. It is a bright and magical tale set in an Eastern land. Lila, daughter of the King’s Firework-Maker, wishes to follow in her father’s footsteps and produce great works of fiery art. Despite her prodigious gifts, her father does not feel that firework-making is a suitable career for a young girl. Aided by her best friend, Chulak, who guards the King’s Great White Elephant, and by the Elephant himself, Hamlet, Lila journeys through the jungle to Mount Merapi in order to learn the secrets of fireworks, and to prove both to herself and to her father that she too is a great Firework-Maker.

Pullman’s quest-tale is richly embellished. Chulak is punished for selling advertising space on the Great White Elephant’s broad back. Hamlet the Elephant pines for his beloved Frangipane, imprisoned in the Royal Zoo. Within the jungle, Lila encounters a band of incompetent pirates, one of whom later starts a restaurant that fails as he majestically misunderstands the profit-making needs of capitalism. At Mount Merapi, Lila discovers that she lacks Enchanted Water, given by the Goddess of the Emerald Lake in order that she may survive the burning flames of the Royal Sulphur guarded over by the great Fire-Fiend Razvani.

Composer David Bruce and librettist Glyn Maxwell conceived the idea of their children’s opera before they settled upon Pullman’s story as a source. Bruce cites Mozart’s The Magic Flute as a key inspiration, coupled with an Indian tale that was later rejected in favour of Pullman’s novel. Bruce’s primary interest it seems was in the character of the novel – the magic, the exoticism – rather than the narrative itself. Maxwell’s task of condensing the swift, action-packed novel into a two-hour libretto was considerable. At times the pacing is unrealistic, certainly for those of whatever age who don’t know the novel well. The words are often heard only once and are sometimes hard to distinguish behind the costumes and beneath the orchestra. Musically, the opera is at its best in the stiller moments: when Lila is alone in the jungle, and at the culmination, a gigantic firework display competing for the King’s approval. Here, Bruce’s liquid and inventive score breathes. 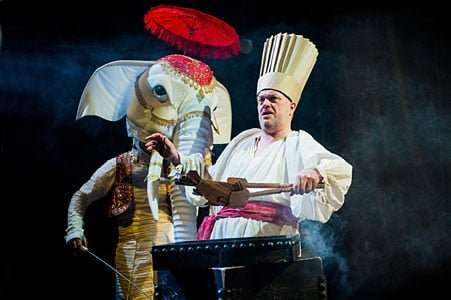 Bruce admits to having “a funny relationship with other musical cultures”, preferring the “surface” to the substance, taking the sound rather than the structure of eastern traditions. There is a lot of Britten in the pages: fluttering woodwind from Peter Grimes; haunting scales from The Turn of the Screw; and the bouncing, almost minimalist, Gamelan voice Britten found in The Prince of the Pagodas. Bruce’s quirky orchestration combines a chamber ensemble of strings and brass with xylophone, harp, plentiful percussion and accordion. The part of Hamlet is written for a countertenor, here James Laing, providing an extra element of magic to the proceedings when the female-sounding White Elephant first removes his beautiful, ornate mask.

It is the staging and puppetry that transform this opera into a hugely entertaining spectacle. Crouching at the front of the stage, Steve Tiplady and Sally Todd scribble on overhead projectors, splash water onto lights and produce waves of sulphurous flames by billowing orange sheets. The cast moves around behind canvas screens wearing puppets as headdresses and return to the front to manoeuvre the elephant trunks and springing pointed beards that have been incorporated into their costumes. Mary Bevan, endearing as the feisty young heroine, stomps around in huge flowing trousers, singing to drawings appearing on the walls and on pieces of paper held up the rest of the cast. This is a true ensemble work, with every performer except Bevan doubling up on their roles. The fluidity with which a pirate turns into an Echo and then the Emperor is a large part of the fun. The show-stopping finale, a firework competition in which Lila battles to save her father, is thrilling even though the visual effects are no more than spinning bits of plastic projected onto a screen.

Although certainly a work for children, the Firework-Maker’s Daughter has enough depth to please an adult. At times the plotting is confusing and the humour is aimed more at the kids than their parents. Nevertheless, between Bevan’s delightful Lila, Bruce’s inventive score and the majestic work of puppeteers Tiplady and Todd, there is a great deal of magic to behold.