Bizet
Carmen – Opera in four Acts to a libretto by Henri Meilhac & Ludovic Halévy based on a novella by Prosper Mérimée [sung in French, with English surtitles; spoken commentary in English] 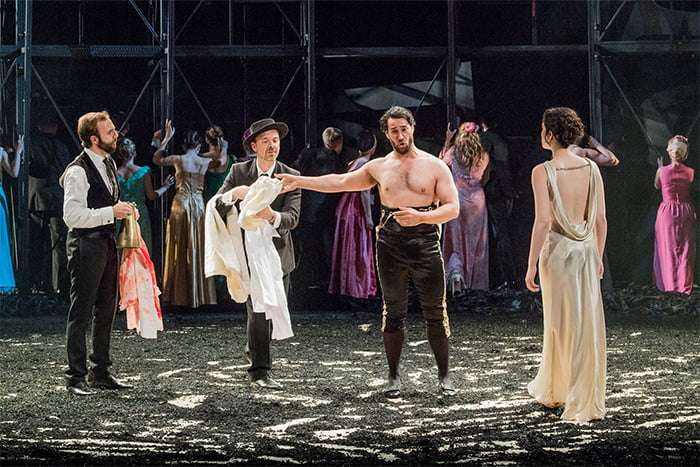 Grange Festival is confusingly occupying the former site of Grange Park Opera. Little has changed in this idyllic country-house venue, except plush new seating and a multitude of marquees on the expansive lawns conjuring Henry V’s Agincourt.

Bizet’s Carmen was always going to be a likely choice for a new artistic venture, although its familiar tragic love-story makes it notoriously hard to pull off. Not least is a requirement for directorial novelty and a mezzo who can offer dangerous allure. Annabel Arden’s production certainly brings a fresh approach and, along with designer Joanna Parker, they neatly manage to avoid cliché. Restraint is the order of the day with no brightly-costumed cast parading around a sun-drenched Seville. Far from succumbing to the tired old stereotype of testosterone-filled soldiers, Arden puts more vitality into the women. In Act One, replacing urchins with provocative girls, she appears to pre-empt Carmen as a sexual predator.

The set is an anonymous location peopled by solders in fatigues and girls in mostly 1970s’ attire, colour mainly confined to the outer Acts. Behind the no-frills staging with its mobile platforms rises a black backcloth onto which images (birds of prey and later human skeletons) are sparingly and subtlety projected. How timely that these progressively disturbing metaphors seem to suggest a “dead woman walking.”

By far the most intriguing gesture is the addition of an English-spoken Greek chorus – two lively narrators who kept us up to speed with the plot. Aicha Kossoko and Tonderai Munyevu provided dynamic interaction and, although unnecessary, became a compelling presence. This is a mixed-language production, using the Opéra-Comique version with contemporary dialogue by Meredith Oakes, and there are also some bizarre noises-off. 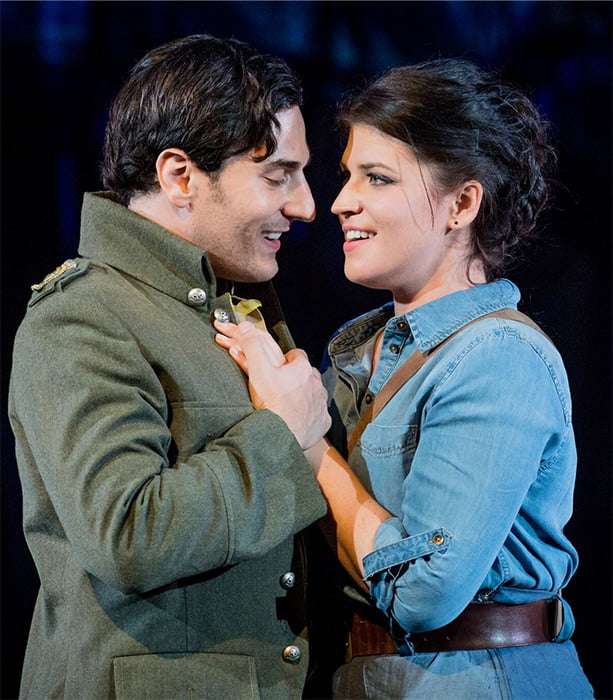 But casting (and this is predominantly a young troupe) requires significant roles to be taken by singers with stage presence. A suave Phillip Rhodes as Escamillo has this in spades and there is no doubting the generosity of his voice and his ‘Toreador’ number filled the stage; rich tones and smouldering looks form a perfect recipe.

Despite looking the part, it’s a shame that Na’ama Goldman’s Carmen never quite raised the emotional temperature and her ‘Habanera’ made little impact. Her voice – although very attractive – has only just enough colour and heft to convey any sense of devil-may-care wantonness. The temptress in her did emerge in ‘Seguidilla’, vocally insolent and seductive, but when singing about the joys of liberty there was scant evidence from her eyes that she believed her words.

It’s left to Leonardo Capalbo’s José to make the strongest impression with a voice and personality that gathered dramatic intensity. Ringing tones informed the ‘Flower Song’ and by Act Four José’s implicit doom was a mixture of rage and hopelessness presented with nearly uncontrollable passion; a towering performance.

Other roles are vividly etched, with a sympathetic if occasionally strident Shelley Jackson as Micaëla and a firm Gregory Soloviov as Zuniga. Other prominent moments are a fleet Quintet, with excellent ensemble, and the card-game where Marianne Croux and Filipa van Eck (respectively Frasquita and Mercédès) formed an ideal partnership. The Chorus added considerable zest and the Bournemouth Symphony and Jean-Luc Tingaud were on splendid form with numerous ear-tickling moments not least in the Entr’actes.