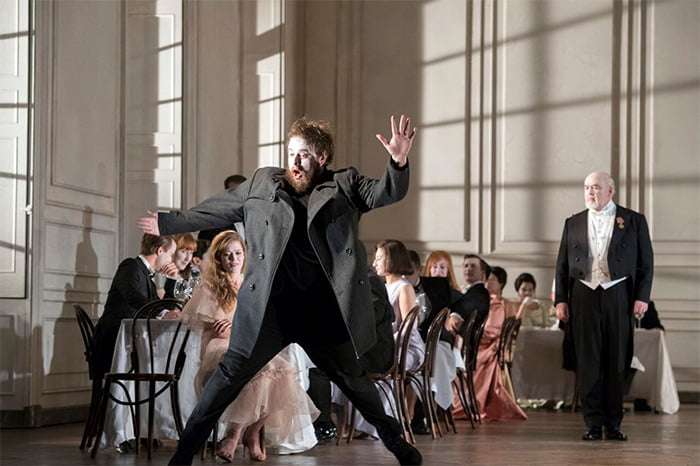 With a record of a new commission almost every decade, Glyndebourne confirms its astute choices in following Jonathan Dove’s Flight, Harrison Birtwistle’s The Second Mrs Kong, and Peter Eötvös’s Love and Other Demons, with Brett Dean’s Hamlet. It reunites former Vladimir Jurowski with the company for the first time since his departure in 2013 and boasts a cast with impeccable Glyndebourne credentials. Both John Tomlinson and Sarah Connolly started their professional careers as members of the Glyndebourne Chorus, while Jacques Imbrailo returns after taking the title-role of Billy Budd in 2010 and 2013. Hamlet himself is Allan Clayton, previously Albert Herring here.

Composer, librettist and director, however, are all new to the house. The first request was in 2010; choice of subject 2013 with Neil Armfield coming on board; Matthew Jocelyn and Clayton approached 2014 (the latter asked to speak soliloquies as well as sing them). Whether there was any notion of aiming for Shakespeare 400 last year is undisclosed and in any case, operatically at least, Austria took the lead – Bregenz ‘rediscovering’ Faccio’s 1865 Hamlet to a libretto by Boito and Vienna’s Theater an der Wien commissioning Anno Schreier’s eponymous opera.

Glyndebourne’s Hamlet is refashioned from all three of Shakespeare’s versions (the ‘bad’ first quarto, the longer second one and the first folio editions), and Jocelyn has created an admirably clear and swift-moving structure which Armfield’s production unfolds seamlessly. That in itself is impressive, but the effect with the music is cumulative, building to a very fine achievement indeed. Like Dean’s previous opera, Bliss, Dean has built up to the ultimate work with a series of smaller ones. His music, including electronics generated from a small group of instrumentalists (percussion, cello and clarinet), engineered by Bob Scott and the composer, is wide ranging and atmospheric, with vocal settings that lie largely naturally in a singer’s range, with nods to Britten. Jurowski’s contribution to the mix was to encourage Dean to use the whole auditorium, so there are satellite ensembles of percussion, clarinet and trumpet on the upper level on either side of the auditorium and the chorus has eight members in the pit and – at the beginning of the second Act – they invade the auditorium itself, and accordionist James Crabbe brings his distinctive timbre to the play-within-a-play scene. 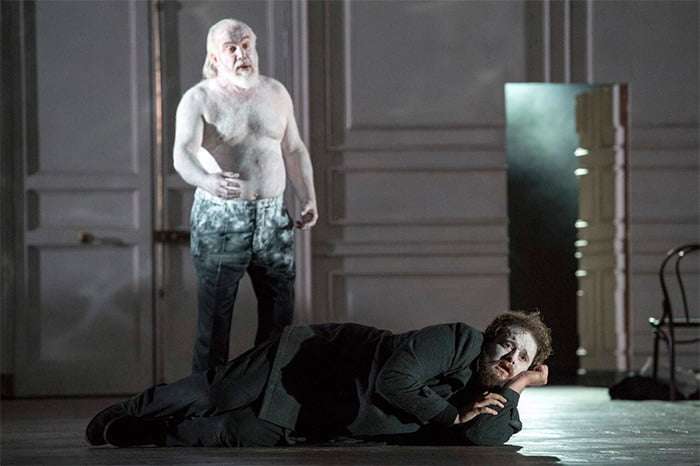 So, grand in ambition and design, Dean’s Hamlet is presented with a brimming confidence that caused a real buzz amongst the first-night audience. It opens with an ominous, partially electronic rumbling and the curtain rises with only Hamlet’s face lit on a dim stage. He stutters “to be or not to be” before the lights go up on Claudius and Gertrude’s wedding with the guests seated on three sides of a spacious, bright room. The King and his new Queen arrive with Polonius officiating, and Laertes bids his farewell to all, including his sister with whom Hamlet distractedly dallies. Clayton’s Hamlet, traditionally in black save for a long jacket though still dark, constantly roves the stage, relentlessly anguished at his now-fatherless predicament. Only then do Horatio and Marcellus enter to tell him about the ghost’s sighting and the stage quietly empties, leaving only a chair on which is sat topless Tomlinson facing away from the audience as old Hamlet.

Dean draws us inexorably in, aided and abetted by Jocelyn’s remarkable conflation of Shakespeare. The walls of the large room are moved to form a corridor on the forestage where Rosencrantz and Guildenstern are introduced as a Tweedledum/Tweedledee double-act (admittedly rather thinner), both light-suite countertenors, before Polonius announces he’s found out what ails Hamlet – love for his daughter Ophelia, whom he encourages to read aloud Hamlet’s letters. She is told to wait for Hamlet, the result (following the ‘bad’ quarto version of “To be or not to be” – shorter and punchier) being that he tells her to get to a nunnery. The stage flats are reversed and open out for the players’ arrival, led by a black-bearded Tomlinson. Here Jocelyn playfully (pun intended) has the players rehearse some of Hamlet’s great soliloquies (including “What is a man” which otherwise does not appear, as the whole Fortinbras storyline is removed here), before the dumb show of ‘The Murder of Gonzago’ frightens the King and the play is abandoned. The first Act draws to a close with Claudius’s prayers overheard by Hamlet, who has the chance to revenge his father’s death, but decides against sending Claudius to Heaven from his devotions and then the murder of Polonius in Gertrude’s bed chamber. Old Hamlet’s Ghost reappears, but Gertrude can’t see what Hamlet sees and as he flees, she slowly follows him out, with Connolly suggesting that Gertrude is just as much on the verge of madness as her son. 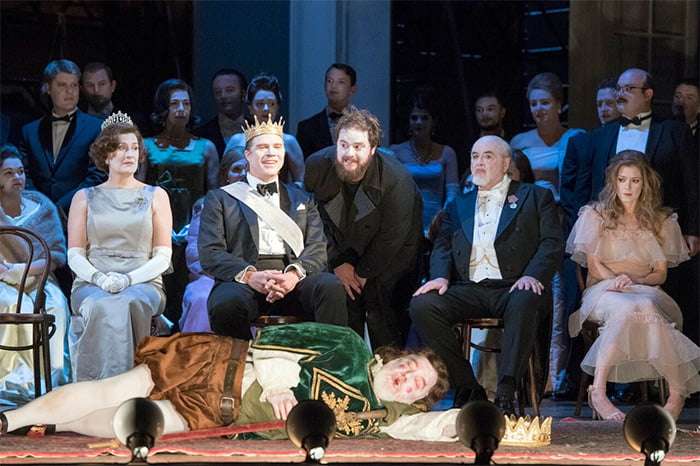 The second Act has the two biggest theatrical shocks. The raucous opening includes chorus-members entering the auditorium and calling for Laertes to be King, Dean’s music crackling with ferocity and danger. The riot is averted when Claudius and Gertrude tell Laertes that his father was killed by Hamlet but his anguish over Polonius is compounded by Ophelia’s entry, almost naked under a tatty tailcoat, pulling at flowers, also turned mad. The scheme is laid between Claudius and Laertes to kill Hamlet, who here is not sent to England. There’s a coup de théâtre in the transformation to the graveyard as Tomlinson (again) appears in a hole in the stage to add to the pile of soil lowered on a gantry from the flies, on which stands Horatio and Hamlet. Hamlet accepts the challenge for a duel with Laertes issued not (as in the play) by foppish Osric, but by the countertenor double-act, a welcome bit of levity before the tragedy concludes. The final scene reconstitutes the large room, and the duel takes its expected course (although with more deaths than Shakespeare envisaged…); a sombre viola solo (Dean’s instrument) characterising the final pages of the score.

It’s a Herculean performance from Allan Clayton, always sweet-toned throughout a massive sing. Barbara Hannigan is a strong-willed Ophelia, whose girlish, demeanour in the first Act, beneath a salmon flounce dress, turns to distraught distraction in the second, bringing the bel canto mad-scene into the twenty-first century. Connolly brings to her reportage of Ophelia’s death a heartfelt emotional truth that sets the scene for the concluding catastrophe. Rodney Gilfry portrays a supremely confident man shattered little-by-little by events he was too cavalier to contemplate or recognise, while Imbrailo’s effortless baritone and Kim Begley’s distinctive tenor make their mark in smaller roles (Shakespeare’s fault, of course). Tomlinson revels in his three parts, while Rupert Enticknap and Christopher Lowrey have great fun with Rosencrantz and Guildenstern, with the most immediately ear-catching music. Equalling the quality above stage, in the pit the London Philharmonic took to Dean’s music as if it was in its blood, fired by the persuasiveness and precision of Jurowski’s conducting.

Perhaps Dean could indulge a little more lyricism, but greater acquaintance will maybe acquaint the ear with the score as a whole to annul that comment. To that end, the final performance on July 6 will be broadcast both live to cinemas, and also the Glyndebourne and The Telegraph websites, with legacy viewing for a week. Hamlet – to take a quote from the final scene somewhat out of context – is a “palpable hit”.