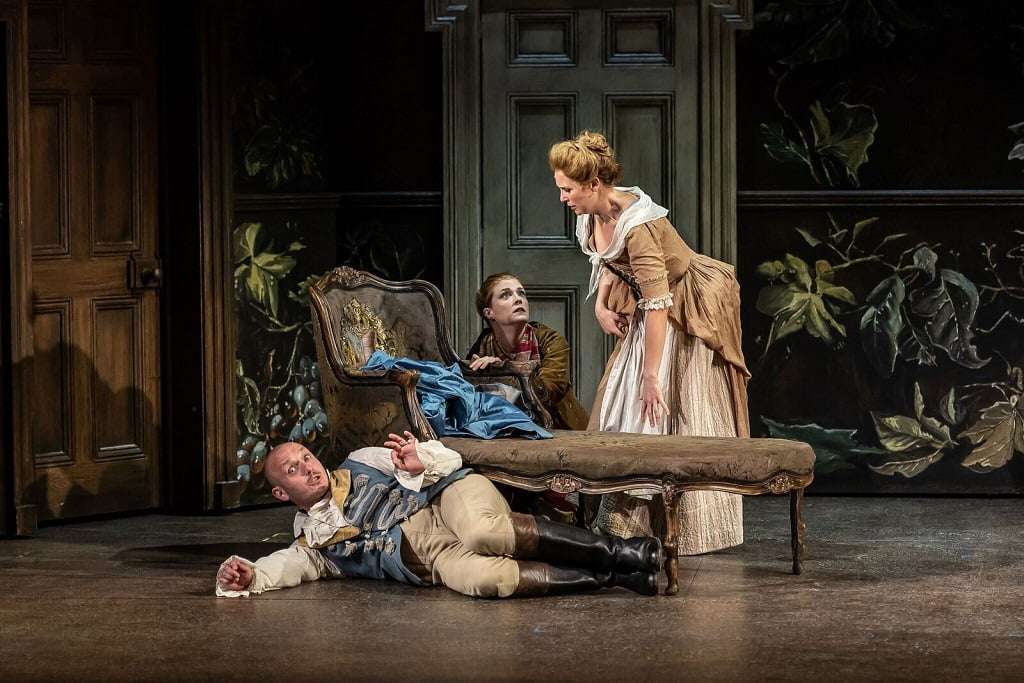 Sir Isaiah Berlin’s comment: “The best opera ever written by a human being” is quoted as part of the publicity for this production. As always it comes down to a matter of opinion as to whether or not The Marriage of Figaro is the best or even greatest opera. If you are impervious to Mozart (and there are some who are) then nothing will change your mind but if you are prepared to listen and follow the story of this masterpiece then it is difficult to resist the notion. The challenge for a producer is not to betray what makes this extraordinary creation great. Clarity is a key: clarity for the various threads of the story which are all tied up by the end, clarity for the characters so that their humanity shines through: the betrayed Countess, her errant husband, the over-sexed but confused Cherubino, the wiliness of Figaro and the brilliance of Susanna (the cleverest character of them all).

Having got that right, then comes the music, the singing and the acting. So, I will take these factors in this order, beginning with this intelligent production directed by Martin Lloyd-Evans and conducted so eloquently by Richard Egarr. As the Overture begins, servants assemble at a table making the bouquets and floral wreaths to be presented to the Count and Figaro and his bride later. The Count is there too, a female servant escaping his clutches before another removes his riding boots, placing them at the front of the stage (for future use, as it turns out). Members of a hunting party pass the audience and march on to the stage before, from the wings, the scenery changes and we are in Figaro and Susanna’s room jammed between the two doors which will be so much part of the production as it develops. After a few initial doubts I came to appreciate the clever simplicity of the set design (Tim Reed). At the end, in the garden, trees in the moonlight are a background to a table behind and under which characters hide. 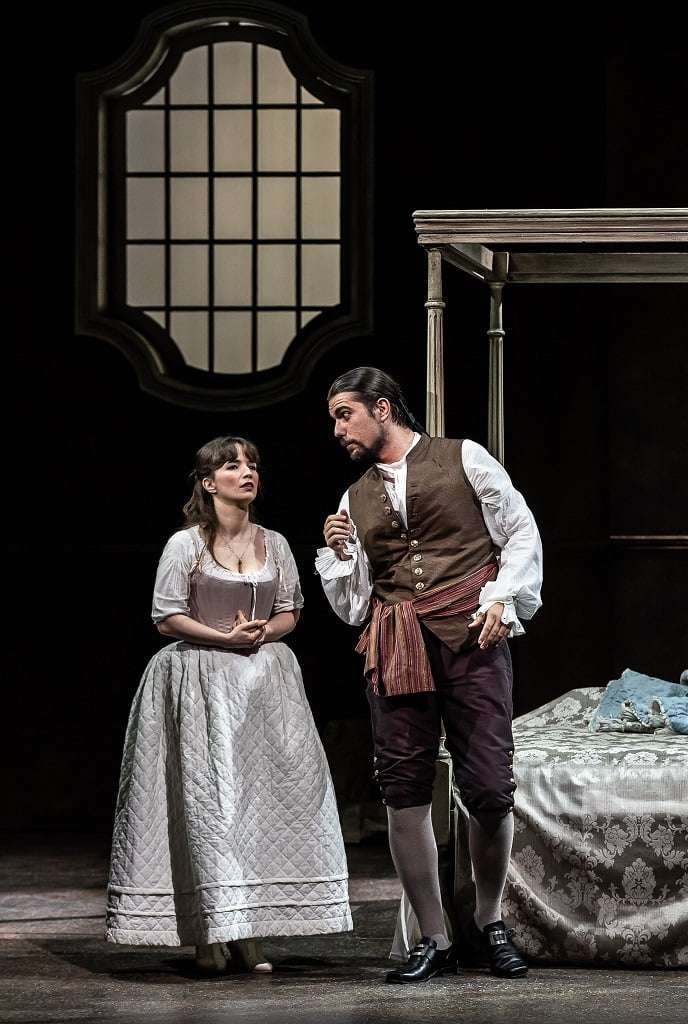 Above all this production achieves the clarity I feel is essential so that the worries of Susanna and Figaro over the Count’s intentions (droit de seigneur), the comedy over the realisation that Marcellina is Figaro’s mother and Bartolo his father and the significant of the pin are not lost. Where it does not work is in what can be the heavy-handed comedy in Act One. The hiding of Cherubino and then the Count does not come off. However, there are those boots: the soles of which are used by Figaro as he measures the marital bed (not floor) as the opera begins.

When hearing a performance such as this under a conductor like Richard Egarr it is presumptuous to quibble and, on the whole, I love his pacing and attention to detail. The Academy of Ancient Music, although a little thin in the strings, is at one with the music. Of course, ‘Porgi, amor’ (a little dragging here) throws the Countess in at the deep end as Act Two begins, here following Act One without a break. Simona Mihai took her time to settle and her light voice sometimes got lost in some of Mozart’s brilliant ensembles. If I find it unlikely she would have embraced Figaro (a servant) at the end of Act Two, this is to quibble. As with most of the cast her acting is excellent, notably at the end when she puts her husband in his place and graciously forgives him, whilst maintaining the air of a deeply wounded wife who knows that she will have to do it all again one day! I liked Roberto Lorenzo’s Figaro a great deal – even if he appears as aristocratic as the count when in ignorance of his own antecedents. His warm baritone is effective. He is not a stupid Figaro but one who becomes easily swayed by his own emotions. The Count (Toby Girling), with his shaven skull, looks the part most notably when wearing his wig and is good at appearing confused (well he might) and angry as well as seductive.

If I was disappointed by any cast member it was Wallis Giunta as Cherubino. I feel she has a fine career ahead of her, but it is not difficult to over-do the comedy and she did not colour her voice that effectively. However, she looks the part and I feel she will develop. Other parts are excellent with the great Richard Suart playing Antonio, the gardener, as he should be played: a disgruntled but insistent servant. Louise Winter and Jonathan Best give us the right mixture of steely resolve and then of comedy as Marcellina and Dr Bartolo respectively. I loved Rowan Pierce as a slightly drunk Barbarina.

So, it brings me to whom I felt was the star of the evening, Ellie Laugharne as Susanna. She is a fine actress and singer, her voice never tiring and her ability to alter posture showing effrontery through elegance to irritation is captivating. She does not overdo the scene when she discovers Figaro embracing his newly discovered mother whom Susanna assumes to be supplanting her as his wife and her rapport with Mihai and Lorenzo in Act Four is exemplary.

This production provides evidence of first-class rehearsal to give excellent ensemble work and the use of some fine young singers. Very rewarding.