The Vertiginous Thrill of Exactitude

In the middle, somewhat elevated

The Mariinsky is back in town, but not as most people would expect it. Perhaps as a result of the Opera’s massive production of “Tsar Saltan” the ballet company is fielding a mere 32 dancers, the majority of whom are corps de ballet in works which require either no, or very little, costuming or set. Cut price Kirov? Well, yes, a bit, and certainly on the evidence of the Forsythe Bill. 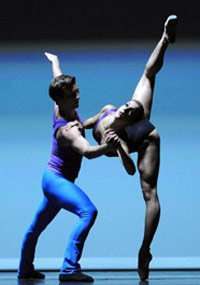 It is almost inexplicable to bring such a programme to London, a city which has seen all these pieces before and of which three are in the repertoire of The Royal Ballet. Forsythe’s particular brand of extreme classicism, in which technique is pushed to and beyond the limit, sits uneasily on the Russians, whose repertoire is still dominated by nineteenth century works – though it is perhaps good for the dancers, and they certainly seem to enjoy the experience. In addition, the majority of the London troupe are very young, and indeed only one Principal, Igor Kolb, appeared in the whole evening. There are plenty of promising dancers but few who show experience and understanding of their material. It doesn’t help that Forsythe’s choreography is generally po-faced and there is a self-regarding seriousness about it all.

Too much Forsythe is not necessarily a good thing (these performances marked the beginning of a year-long Focus on Forsythe 08/09 at the Wells – quelle joie!), and it is true to say he is too samey in his effects and his choreographic vocabulary to offer an evening of stimulating variety. Steptext was danced with approximation rather than the scalpel sharpness it requires – too many fumbles in partnering and a general vagueness about the arms and their movements (Forsythe is nothing if not precise) which meant that the focus was lost. Igor Kolb showed a deeper understanding and coloured and phrased his movements in a way which escaped his junior colleagues; of course there was ample evidence of the dancers’ superlative training (impeccable entrechats from the men), but it seemed to mean very little. Broken-up Bach, the constant upping and downing of the house lights and the onstage blackouts are now tired effects – fresh in 1985 but stale in 2008.

Approximate Sonata went for the same alienating approach, the audience reduced to bemused onlookers. The men were attired in perhaps the most unflattering costumes I have seen on dancers, the ice-dance blue satin trousers and unflattering tops reducing these perfect bodies to misshapen lumps. Only at the end, when a couple seem to break off performance and talk each other through problematic moves, did the piece acquire any humanity and become both interesting and entertaining. For the record, Anastasia Petushkova not only understands the choreography but has the most wondrous body for it.

The Vertiginous Thrill of Exactitude has the bonus of Schubert’s Ninth Symphony as its ‘soundtrack’ and is well known to London. It does, however, have to thrill and to be exact – neither of which took place. The stage patterns of the three women and two men were messy and one dancer looked very much at sea with the arm movements and the speed of the choreography. Nadezhda Gonchar was in command of her steps and Vladimir Shklyarov tore up the stage with his bounding energy and impressive technique.

In the middle, somewhat elevated is now an old war horse, but one which saw the dancers finally let rip, relishing the dangerous extremism of the moves and conveying attitude and recklessness. Ekaterina Kondaurova, muted in Steptext, was in her element in this, her long legs extended and bent where it would not have been thought possible. Elena Sheshina, while not as svelte as the other women on the stage, impressed us all with her attack and impossible balances.

In all, a fair evening, although one would have been forgiven for thinking that one was watching a students’ show rather than the famous Mariinsky Ballet. I suspect it was more fun for the dancers than the audience.