At first glance the coupling of Schumann’s joyful ‘Rhenish’ Symphony with the transcendentalism of Mahler’s Das Lied von der Erde seemed incongruous, the contrast of Schumann’s unswerving affirmation of being alive, and Mahler’s revelation of Life’s ultimate value following his profound exploration of human torments.

Esa-Pekka Salonen managed spirited readings of the outer movements of the ‘Rhenish’. Though pressing tempos forward may have resulted in a seamless structure, it frequently caused inarticulate, sometimes downright sloppy playing from the MET Orchestra. Strings were overbalanced, burying important woodwind passages, yet resilient brass powered through, and there was an excellent horn solo during the first movement. The Scherzo flew by and the third movement’s pacing was too brisk to evoke the gentle flow of the Rhine. A meditative spirituality imbued the fourth movement, depicting Cologne Cathedral, and Salonen established a carnival-like atmosphere in the Finale. 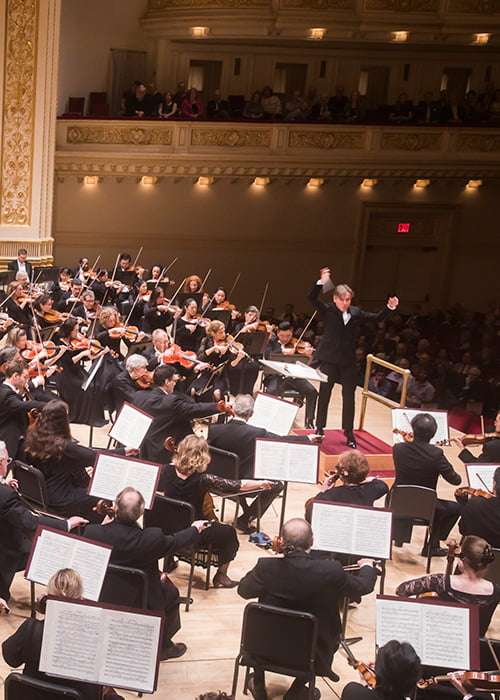 Das Lied von der Erde, often described as death-ridden, is in fact one of Mahler’s most Life-affirming works. The first movement ‘The Drinking Song of Earth’s Sorrow’ presents a Mephistophelian figure who, during the climactic passage, depicts humankind as an inane joke – instinctively comprehended by an ape crouched in the corner of a graveyard and howling with distain at humanity’s presumptuousness of its status. Stuart Skelton, a singer of exceptional talents, seemed clueless as to the import of the text. A Heldentenor is needed here to be heard over the orchestra, but giving a heroic character to this music is misguided, as implying acceptance of its life-devaluing message, and Salonen’s consistently hurried pace affected the players enough to cause lapses and frequent clumsiness.

Skelton was more effective in the brief third movement (‘Of Youth’), even if Salonen increased the tempo during the reprise. And, in his operatic treatment of ‘The Drunkard in Spring’, the tenor tried to force an excessively extroverted character, a victim of the opening movement’s nihilistic approach to Life.

In ‘The Lonely One in Autumn’, Karen Cargill sought to convey a feeling of world-weariness with some measure of expression, but her shrill top, lightweight bottom range and occasional poorly adjusted intonation were disconcerting. Salonen set a relaxed pace, letting the musical flow evolve naturally in-keeping with the melancholy mood, but when greater tension was required, such as at the outburst on an arpeggiated E-flat chord following “The autumn in my heart endures too long” the orchestra all but collapsed. In ‘Of Beauty’, when lads on horseback trample the maidens’ garden flowers, a racy tempo embellished by booming percussion made it extremely difficult for Cargill to elicit even the slightest character in her valiant effort to get through it.

In ‘The Farewell’ Salonen’s brisk main tempo and Cargill’s lack of mellowness combined to detract from the profundity of this poignant assertion of Life’s value as an eternal gift of nature. Cargill was best in the three recitative-like passages, which she sang confidentially, until she blurted out the last passage with undue force. The orchestral interlude was lacking in pathos and depth of feeling, and Salonen tempered the terrifying outburst that concludes this extraordinary section by altering the dynamic balance between the doom-pronouncing trombones and shuddering low strings – revisionism of the worst kind. Then came the moment of truth, when a very soft rising phrase in the second-violins ushers in the most direct and affirmative statement, “Everywhere the lovely earth blossoms forth in spring and grows green anew!”. Mahler is emphatic in his dynamic markings; he does not want the singer to shout these words, but rather to sing them very slowly and softly. Salonen did not follow Mahler’s directions, thereby undermining this crucial point. Later, Cargill’s repetitions of “ewig” (forever), should have gotten softer each time, but instead all were uttered in a murmur, disaffecting what should be a gradual release, merging with the infinite.

On this occasion a masterpiece was simply not given its due.