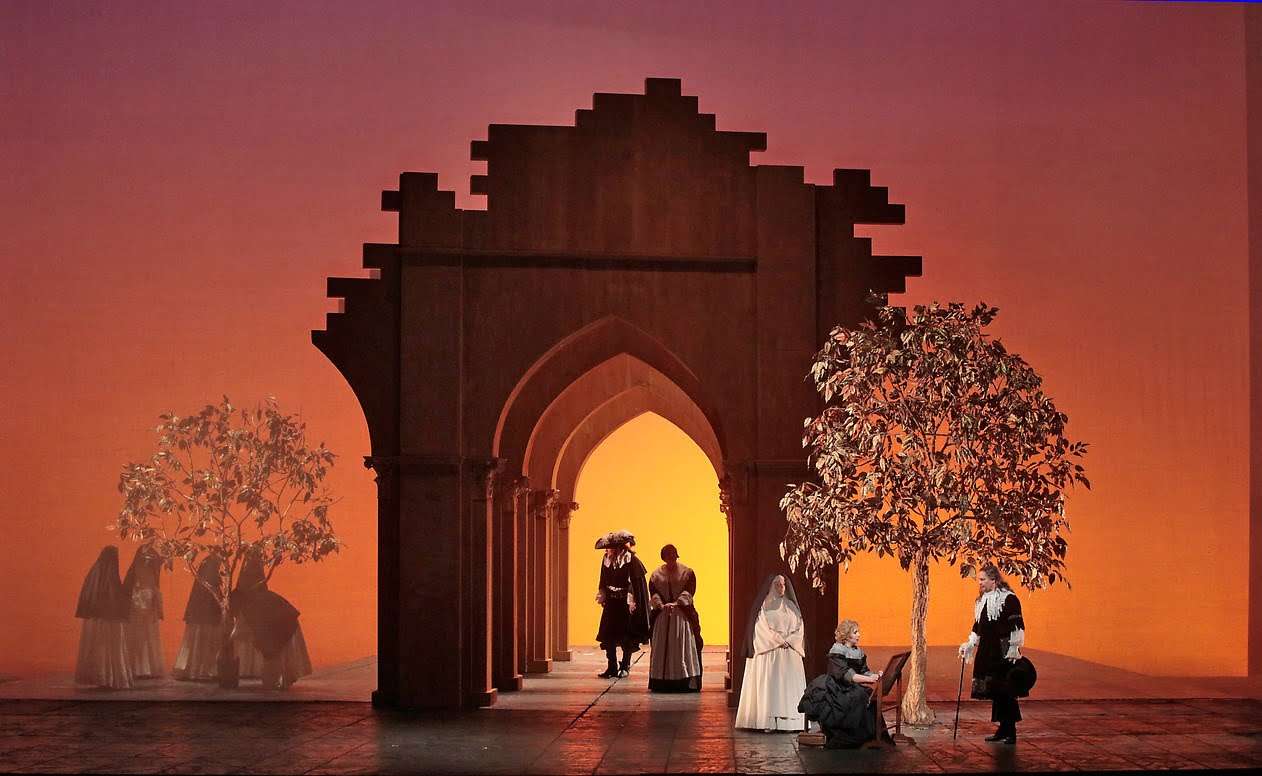 The Metropolitan Opera’s revival of its 2005 production of Franco Alfano’s Cyrano de Bergerac is a smashing success. Francesca Zambello’s staging and Anita Yavich’s costume-designs are relatively faithful to the mid-seventeenth-century setting, combining realism (from splendorous to sparse), with economical use of large structures intelligently reconstituted to suit different scenes. But principally it is the brilliant portrayal by Roberto Alagna as Cyrano and the vibrant, dramatic conducting of Marco Armiliato that makes this little-known score come alive and capture our hearts.

Alfano (1876-1954) is known primarily for an opera he completed, Puccini’s Turandot. Before then he was a not especially successful composer, with only one relative success, Risurrezione, 1904, and occasionally revived. 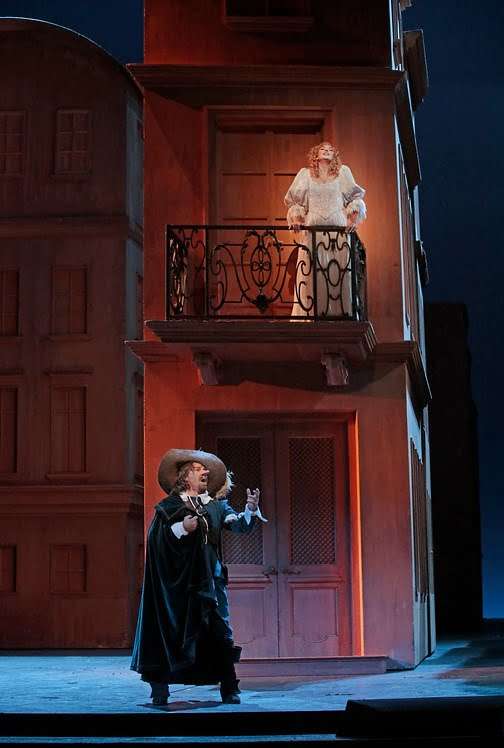 Cyrano de Bergerac was premiered in Rome in 1936. Those who remember the 1950 Hollywood film of Cyrano, with José Ferrer, will recall the basic premise of Edmond Rostand’s play. Cyrano, a poetic swashbuckler in the French guard, is in love with Roxane, but he has two rivals, the handsome young musketeer, Christian, and the lordly Count de Guiche, who commands the regiment in which Cyrano and Christian serve. Cyrano, Roxane’s cousin, makes no attempt to woo her, daunted by his fear of rejection because of his grotesquely large nose. Christian is handsome but his lack of refinement, poetic gift and suavity, makes him shy before her. She reveals to Cyrano her secret love for Christian, and Christian confides similarly to him. Cyrano agrees to supply Christian’s missing wit and words, and writes letters to Roxane to win her favors for the musketeer. When Christian boldly confronts Roxane from beneath her balcony, he is at a loss, but Cyrano disguises his voice as that of Christian and speaks so amorously that Roxane is enthralled.

Christian secretly marries Roxane, but is immediately called to duty by De Guiche, who knows nothing of the entanglements. When their regiment is besieged by the Spaniards at Arras, Cyrano, unbeknownst to Christian, continues to write to Roxane, but Christian finds out and asks Cyrano to offer Roxane the opportunity to choose between them. Then Christian is killed in battle, and Roxane, cutting through the Spanish lines, takes the final letter from her dead husband’s pocket.

The opera concludes fifteen years later in the garden of a convent. Cyrano – poor, victimized by his enemies and mortally wounded – comes to visit Roxane as he has done weekly. He asks her to let him read Christian’s ultimate letter, but when he recites it without looking, she realizes that it had been Cyrano’s words all along that won her heart. Confessing his love for her, Cyrano dies in her arms.

Zambello’s staging is, for the most part, fitting, although the balcony scene is too bare, without foliage behind which Cyrano and Christian can avoid Roxane seeing which is singing. The final scene in the garden focuses on an arched promenade center-stage surrounded by trees. When Cyrano dies, two leaves fall… 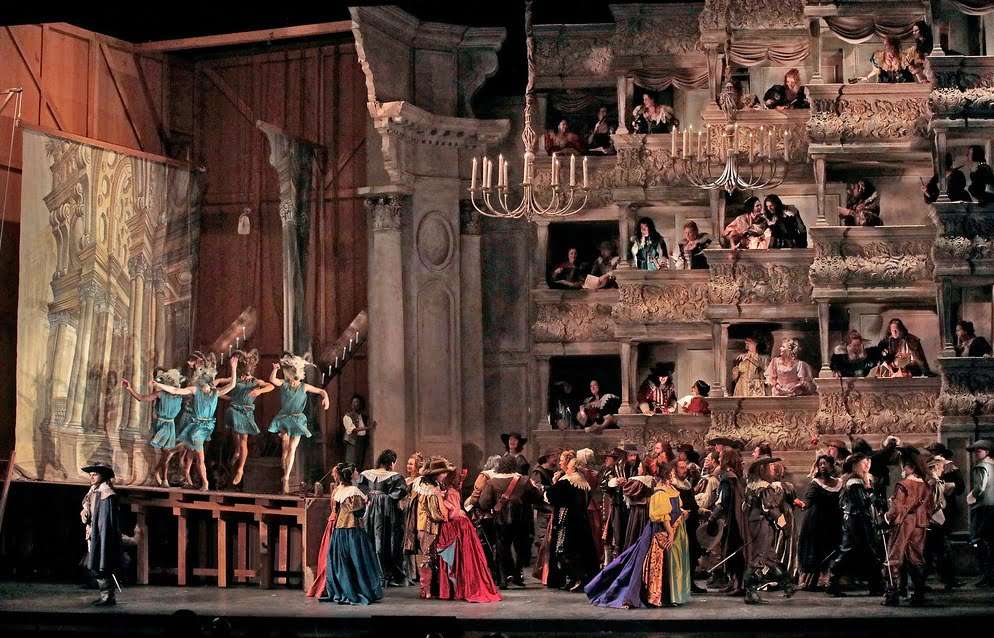 Alagna brilliantly revealed Cyrano’s complex character, bravura assertions and noble bearing, contrasted with humility and reticence. Alagna’s strong voice is well-suited to Cyrano’s heroics – bold, dashing and impudently brash in his eloquent poetizing of the brief, if rather tame, swordplay, impassioned in love and moving as death approaches. Jennifer Rowley is a rather flippant, coquettish Roxane, seemingly too adolescent to inspire verse from her lover, yet she showed spirit and bravery when she appeared at the soldiers’ encampment. At first a bit vocally insecure, Rowley’s voice became firmer, her top range bright and steady, and her manner of expression both tender and passionate.

Atalia Ayan seemed somewhat uncomfortable as Christian, but he also gradually asserted himself and sang with much intensity. Juan Jesús Rodríguez’s vital baritone served Count de Guiche admirably. Each of the minor roles was well performed. Alfano’s music may seem rather tame at times, yet is refined, eloquent and expressive. I can heartily recommend this production as a rare glimpse of an opera seldom performed if admirably served here.