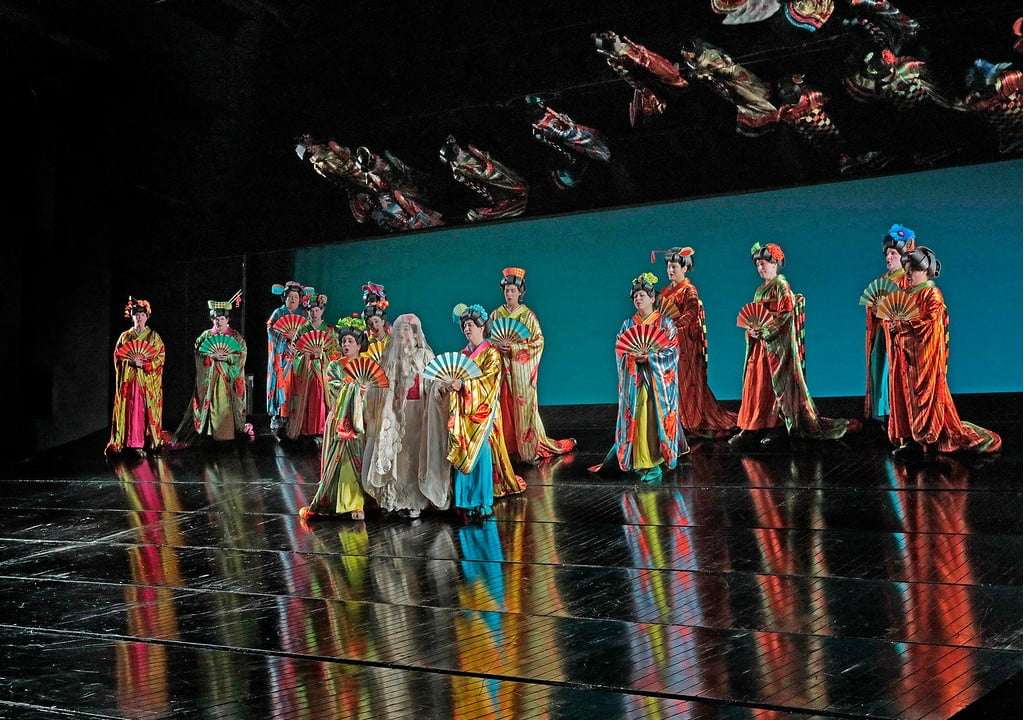 The late Anthony Minghella’s production of Puccini’s Madama Butterfly occupies a significant place in the Met’s history. It began Peter Gelb’s inaugural season as General Director in 2006, with the opening night also the first live broadcast on the Sirius Metropolitan Opera radio channel, and has become a staple of the company’s repertory.

Cio-Cio-San is the cynosure of the opera. Hui He gives a dramatically powerful portrayal of the teenaged geisha who marries naval lieutenant Pinkerton, and is abandoned by him, driving her to suicide. Her voice is strong yet supple-enough to create a convincing impression of youthfulness, and ‘Un bel di’ proved to be a credible expression of love, hope and trust. Roberto Aronica’s Pinkerton got off to a slow start, and it was only in the love-duet that his voice blossomed to match hers. 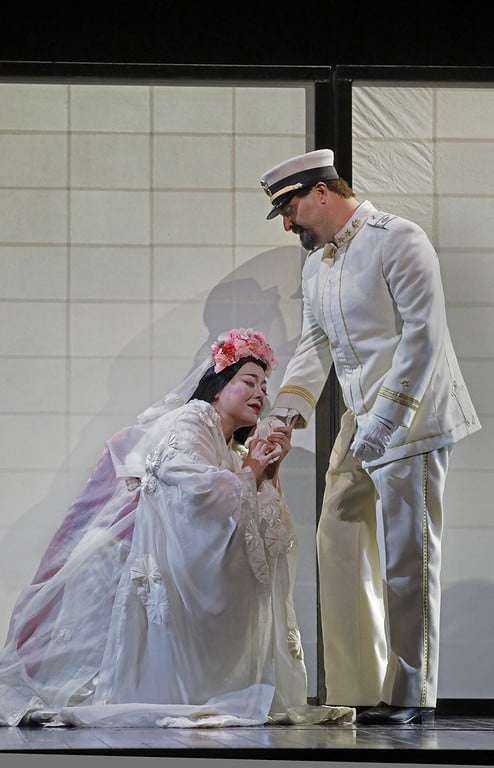 Maria Zifchak is marvelous as the loyal Suzuki, all but owning the part, David Bizic is excellent as the consul Sharpless, his strong baritone providing a solid vocal anchor just as his character, admirably portrayed, serves as a steadying influence, and Tony Stevenson is a convincing Goro. There are also capable portrayals in the smaller if still-significant roles.

The staging features striking effects that serve the drama well, adhering to simplicity of space and shape so as to reflect the Japanese aesthetic. Michael Levine’s set is true to the libretto, cleverly using sliding panels to reconfigure Cio-Cio-San’s house, behind which a red stairway rises to the crest of a hill. The protagonists make arresting entrances and exits against a plain background that Peter Mumford’s lighting colors appropriately to each occasion, and Han Feng’s colorful kimonos for Cio-Cio-San’s entourage make a spectacular image. A slanted mirror above the stage gives us a view from above of the fascinating patterns created by those carrying paper lanterns and birds, and there are intriguing ballet sequences, one that begins in nearly complete darkness and another as a dream-sequence.

The most unusual aspect is the representation of Cio-Cio-San’s child by a puppet, manipulated in bunraku style by three operators, and they are used elsewhere, although they are ineffective in emulating a venerable Japanese art-form in which the models should have facial features and limbs that can be maneuvered to express emotions and interact, the aim being to keep our focus on the story and ignore the puppeteers. The closing moments of the respective Acts are the highlights – in the love-duet the lanterns, showers of petals, and a floral curtain through which Pinkerton carries Cio-Cio-San, are simply gorgeous; the ‘Humming’ chorus is notable for its delicacy; and her suicide is utterly devastating.