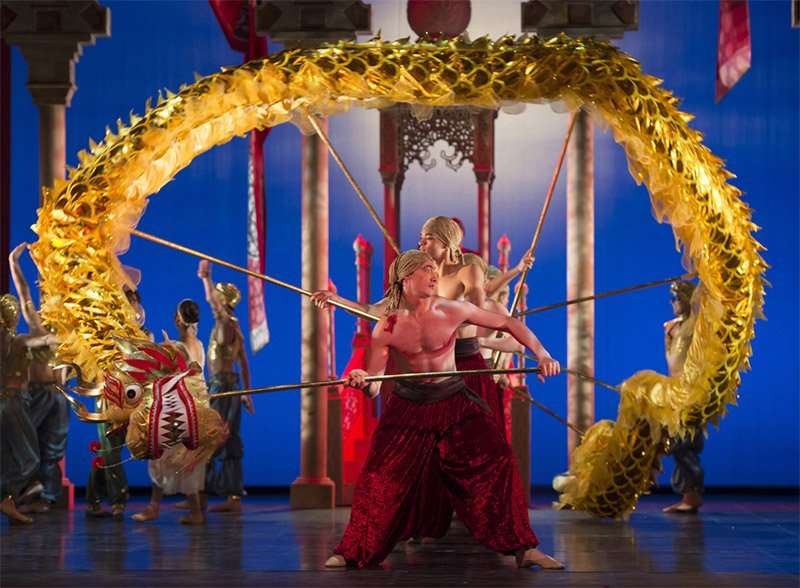 It is always good to welcome Birmingham Royal Ballet back to the Sadler’s Wells Theatre, its spiritual, if not actual, home; this always-likeable company continues to have a loyal London support-base, and it is important that the capital sees them dance in their own repertoire. For this visit, David Bintley’s full-length Aladdin was offered, replacing the initially scheduled new production of La Bayadère, which had to be shelved when the company’s grant was cut.

Aladdin has made it to London before, and was greeted with a mixed response – many found it over-long and lacking in drive in places. Nothing has changed in that respect – it is not one of David Bintley’s best pieces, but it is superbly set and costumed and there remains much of choreographic interest. How one reacts to Carl Davis’s soupy, filmic score, played expansively by the company orchestra, is a matter of personal taste; it is varied, and deftly echoes the colourful, picture-book stage pictures, but for this reviewer, lacks finesse and undervalues the virtue of understatement. The ballet itself possesses much that entertains and, indeed, enchants, and is packed with incident and spectacle – there is little that is more visually ravishing than Act Two’s steamy interior of an Arabian bath-house, all tinkling fountains and dappled light. 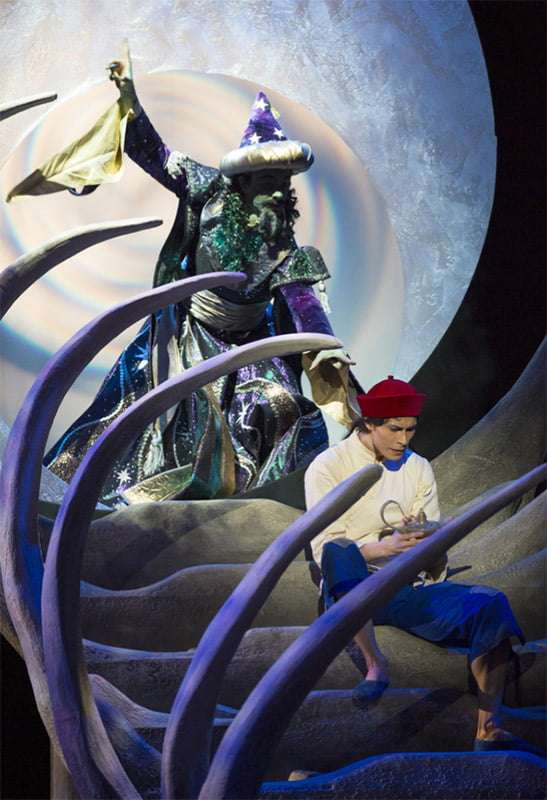 A choreographic highlight is the extended jewels divertissement in Act One when Aladdin, having entered the desert cave in which the Lamp is to be found, is entertained by a succession of duets and ensembles, each representing a precious stone. Here, Bintley brings admirable variety to his choreographic invention, deftly characterising each with its own movement quality and palette. It is also a chance for the company to bring out some of its star dancers in show-off vignettes, from the sparkling Diamond of Momoko Hirata to the extravagantly luxurious pairing of Nao Sakuma and Tyrone Singleton as Rubies. Elsewhere, the level of invention is more variable – the romantic pas de deux between Aladdin and the Princess Badr al-Budur never quite seem to get going, lacking the requisite sweep of movement, despite e best efforts of the dances. There is plenty of entertainment, however, with dancing jinns, Chinese dragons and sundry odalisques, all exquisitely costumed.

The principal interest lies in the casting, and it was good to see a performance other than that at press night to talent-spot and see up-and-coming artists given their moment in the spotlight, alongside company stalwarts. Iain Mackay, the company’s premier danseur noble, seems to be making a deft move into character parts, and had a whale of a time as the story’s baddy, the Mahgrib, hell-bent on securing the lamp and its powers for himself. Assistant Director Marion Tait reprised her deadpan Aladdin’s mother, physically tiny but possessed of blazing personality and impeccable stagecraft. Magnificent under an Assyrian wig and beard, Mackay relished his part, bringing emphatic power to his story-book evil.

From the younger artists, Max Maslen, a First Artist in the company, confidently took on the demanding role of the blued-up Djinn of the Lamp, who is called upon not only to fly convincingly, but also to execute technically demanding choreography in an extended danced divertissement. As the Princess Yaoqian Shang gave ample evidence of a strong, cool technique and impressive physical line, but she does not, as yet, possess the ability to project her personality or to use her eyes to effect. Such an observation cannot be made about Lachlan Monaghan, taking the title role with both confidence and aplomb. He is a natural dancer with an open, engaging demi-caractère personality who projects with ease and communicates the character’s roguish ebullience. He is also a strong dancer, easily achieving the physical placed on him by this large role; he clearly enjoys taking centre-stage and seems unafraid of whatever he is called upon to do – it is easy to like him and to enjoy his performance.