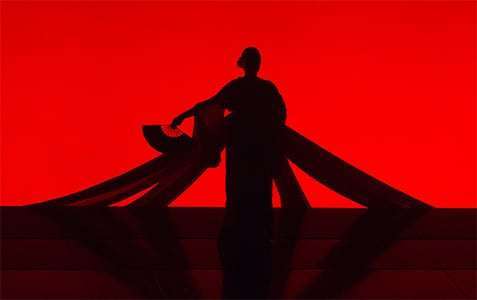 From the Saharan desert in The English Patient to the snowy forests of Cold Mountain, the late Anthony Minghella’s films are suffused with visual warmth and emotional intimacy. That would seem the ideal combination for Madama Butterfly, given its sustained focus on one woman’s devotion, love and ultimate heartbreak. Somehow, though, both are missing from Minghella’s production of the opera (a mainstay of ENO in London), something of a disappointment considering the beauty of the director’s eye and Puccini’s stirring score. If one could distill Minghella’s approach to Butterfly, it might go something like this: “Let’s reduce everything to its most essential elements – color, composition and symbols of Japanese culture.” The idea would probably prove brilliant for a screen version, where cameras selectively frame a scene and close-ups are possible. But on the Met’s gigantic stage, much of it gets lost.

The visual strong points are, without a doubt, exceptional. A constant, glowing strip of colored light offers a striking backdrop for dramatic entries: a geisha’s stark silhouette against ardent red, Butterfly (Cio-Cio-San) and her wedding entourage against vibrant teal, and the outline of Pinkerton’s naval uniform in the soft orange of dawn. Other graphic elements work to punctuate the space: white orbs of paper lanterns, the highly choreographed sliding of screens, and scarlet flowers scattered in a fit of fury across the pitch-black floor. While striking, all these components contribute to the ultimate feeling that the production is an exercise in graphic design. A few moments of great visual impact also can’t sustain the long tender stretches in between that are so essential to the mood and feeling of this tragedy. 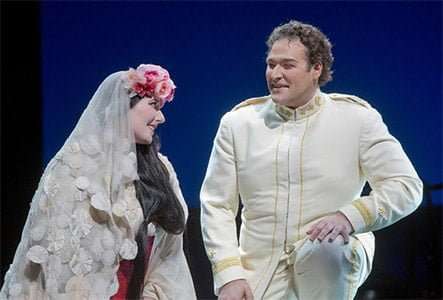 It falls to the singers and the orchestra to create the human atmosphere needed in a story about love. The cast in this Met premiere made a valiant effort. Amanda Echalaz, making her House debut in the title role, opened with a strong, solid presence, her voice commanding during the wedding ceremony. Bryan Hymel offered a convincing Pinkerton, smug and callous in the beginning, remorseful and grief-stricken at the end. Left to the bare, spare stage cavern, however, the singers had little to interact with, and a distinct chill and stiffness pervaded the performance. One wished that there were something, anything warm or soft in the sets to help them along, if even just a rug. When Suzuki helps Butterfly undress, it feels like they’re in a clinic with dirty floors. As Butterfly and Pinkerton prepare to consummate their marriage, there’s little closeness, even as lanterns swirl around them and gorgeously-lit cherry blossoms flutter down.

Thankfully the Met Orchestra, under Marco Armiliato, who was substituting for the unwell Philippe Auguin, carried the night, particularly in the powerful and nuanced second Act. Butterfly’s aria ‘Un bel dì’ (One fine day) in which she dreams of seeing Pinkerton’s ship enter Nagasaki harbor, was disappointingly straightforward and even slipped out of synch with the pit at one point, the conductor taking more time with rubato and expressive swells in the famous melody. The orchestra’s sensitive contribution continued for the rest of the opera, and Echalaz’s voice opened up afterward with broader emotional range, such as when the US consul Sharpless attempts to read Pinkerton’s letter to Butterfly. 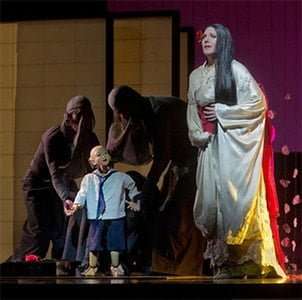 Here another aspect of the production became distracting: the use of a puppet for Butterfly’s son. The creators are paying tribute to Japanese Bunraku from 17th-century Osaka, but the technique requires several people shuffling around the puppet to maneuver it. This creates an awkward crowd in what are supposed to be Butterfly’s most private moments with Pinkerton’s child, even though the production takes great pains to make the veiled, black-clad puppeteers as non-intrusive as possible. Additionally, when Butterfly cradles or rushes to embrace her son, the wooden-looking doll is simply no substitute for flesh and blood, especially when Echalaz sings Butterfly’s tender and wrenching farewell to him.

Having discovered the truth about Pinkerton’s marriage to another woman, Butterfly retreats to kill herself. The scene looks stunning: her luminous white kimono with broad scarlet sash pierces the blackness of the enormous stage. Echalaz revealed her full potential in this devastating finale. As Butterfly plunges the knife into herself, a long, vibrant sash is unfurled behind her, connoting rivers of blood. You can’t help but wish that such riveting visuals were enough to make the production a greater success.