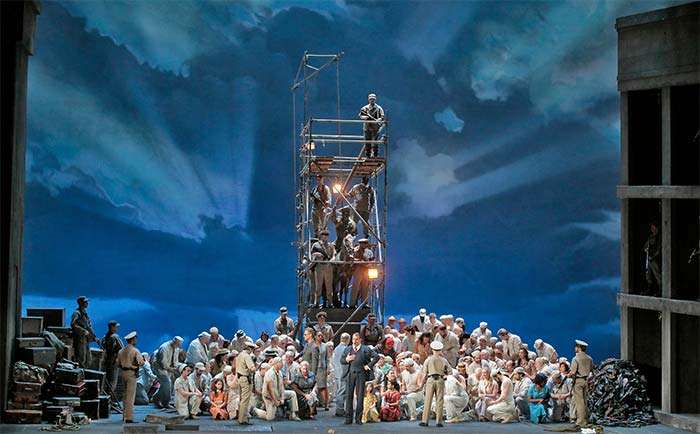 Jürgen Flimm returns to Metropolitan Opera to direct this revival of Fidelio, from 2000. His staging, although at times illogical, holds together reasonably well, and its shortcomings are more than offset by the majesty of Beethoven’s music, marvelously performed.

Leading the stellar cast are Klaus Florian Vogt and Adrienne Pieczonka as Florestan’s wife, Leonore, who disguised as a man, named Fidelio, secures a position at the penitentiary where her husband is held as a political prisoner. Vogt’s sweet tenor evinced purity of tone (his Lohengrin at Bayreuth is among my fondest musical memories), yet has ample power in his despair and longing for freedom at the beginning of Act Two. Pieczonka follows her triumphant Chrysothemis in Richard Strauss’s Elektra, excelling when singing with others as well as for a thrilling ‘Abscheulicher! … Komm, Hoffnung’, in which she denounces the evil governor, Don Pizarro, and expresses hope of freeing Florestan. 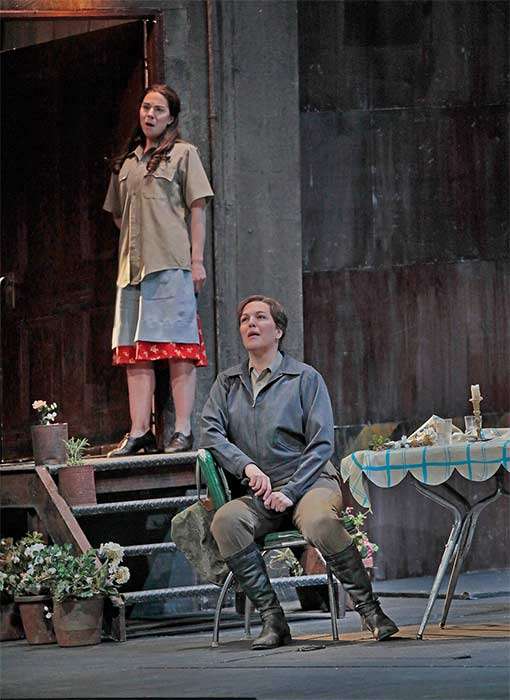 Paralleling these matters is a more domestic subplot centered on the jailer Rocco, his daughter Marzelline, and Jaquino, a guard whose love for her is not reciprocated because she has fallen for Fidelio. Hanna-Elisabeth Müller makes a terrific debut; we empathize with Marzelline’s hopeless ardor for Fidelio, her revulsion at Jaquino’s attentions, and share her heartbreak even as everyone else is rejoicing the prisoners’ liberation. Falk Struckmann’s spry Rocco often injects humor (including popping a champagne cork across the width of the stage!), and anchored ensembles with a solid bass-baritone that also contrasts nicely with the deeper and resonant voice of Greer Grimsley’s menacing Pizarro. David Portillo and Günther Groissböck (the latter as Don Fernando, the minister who frees the captives), both gave fine accounts, as did Kang Wang and Paul Corona in their solos during the poignant ‘Prisoners’ Chorus’ (extolling the open-air yet sung indoors!), and the dialogue came through lucidly.

Flimm’s more or less present-day setting does not undermine the plot, although the ubiquitous assault rifles are disconcerting, and it’s unfathomable how the inmates could be allowed out with all those weapons lying around; and his staging of the dungeon setting becomes quite confused with Rocco unsure of where to be and what to do, with Leonore unwisely discarding her pistol given Pizarro remains a potential menace. And in the final scene, the similarity of Fernando’s costume and cavernous vocals to those of Pizarro in Act One briefly created the false impression that the malevolent latter had turned benign.

Fortunately none of these glitches diminish the drama or Beethoven’s score. Sebastian Weigle’s conducting ensures musical clarity and just balances between stage and pit. The ultimate chorus secures a joyous close, tempered only by Marzelline’s distress.