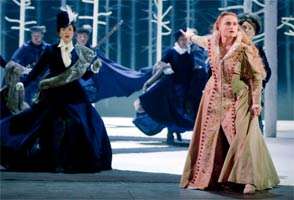 This was the second Metropolitan Opera performance of the recent Nicholas Hytner production of Verdi’s “Don Carlo”, a co-production with Royal Opera House and Norwegian National Opera and Ballet. The Met production is physically identical (except for additional costumes for a larger chorus) with the one at the ROH, where it premiered in 2008 with a cast that included four of the principals in the present performance – Ferruccio Furlanetto as King Philip, Marina Poplavskaya as Elizabeth, Simon Keenlyside as Rodrigo and Eric Halfvarson as the Grand Inquisitor.

“Don Carlo” is the product of a chequered creative process that began in 1865 and spanned some two decades. In the course of composition and rehearsals, Verdi augmented the original French libretto (based on Friedrich Schiller’s “Don Carlos, Infant von Spanien”) with several additional scenes, but also made substantial cuts to shorten the five-act opera’s running time just before its premiere in Paris in March 1867. Verdi made further adjustments to the score five years afterward, and then returned to “Don Carlos” (as the original French version was called) a decade later, creating an extensively revised four-act version that premiered at La Scala in 1884 in an Italian translation. Finally, an 1886 production restored (apparently with the composer’s approval) the original first act, set at Fontainebleau, which Verdi had shortened for the 1867 premiere and cut altogether in his later revision. “Don Carlo” is being performed here in that 1886 version, but using Verdi’s abbreviated first act instead of the original one. 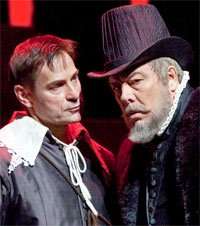 This score is one of Verdi’s greatest, with music that matches the drama’s treatment of monumental clashes between church and state, tyranny and freedom, and honour and duty, as well as the more intimate and personal themes of love, family, friendship and loyalty. Yannick Nézet-Séguin, music director-designate of the Philadelphia Orchestra, led an outstanding and fairly fast-paced account of the score, drawing exceptional playing from the Met Orchestra. His demonstrative conducting style seemed to physically shape the music’s phrases, and the orchestra and singers responded marvellously to his gestures. Nézet-Séguin did an excellent job of maintaining dynamic balances between singers and orchestra, particularly in passages where an orchestral part functioned as an additional voice in a vocal ensemble. 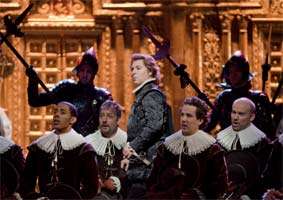 Roberto Alagna got the evening off to an auspicious start with ‘Io la vidi’ in which he sings of having seen the French dauphine Elizabeth, to whom Carlos is betrothed, and his love duet (‘Di qual amor’) with her (Marina Poplavskaya) was ardently sung. His cry of ‘Ahimè!’ (Alas!) was heartbreaking, as a descending wall left Carlos isolated at the front of the stage, an event that would recur at the end of several later scenes, each time aptly symbolising his being cut off from love, family and comrade.

For the remainder of the opera, Carlos remains trapped in the unbearable position of being denied any contact with the woman he loves – now his stepmother and Queen – whilst being locked in a losing conflict with his father, King Philip, the oppressor of the people of Flanders, for whose freedom Carlos is a passionate advocate. As Carlos joined one character after another in duets and ensembles – Verdi did not give him any arias – Alagna was well up to the demands of expressing these dark emotions. 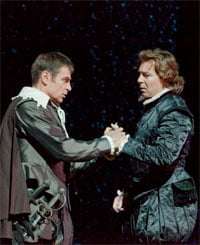 Some of the opera’s most gripping moments involve Carlos’s relationship with Rodrigo, the Marquis of Posa, who shares his dedication to the Flemish cause and whose friendship is Carlos’s only respite from despair. Simon Keenlyside was a superb Rodrigo, bringing vocal power and accuracy, intelligent musicianship and effective stage-presence to the role. Their stirring pledge of friendship (‘Dio, che nell’alma infondere’) in Act Two was upbeat in its lyricism, but in Act Three, Carlos began to doubt Rodrigo’s loyalty – first when he entrusted incriminating documents to the Marquis, and later when Rodrigo disarmed Carlos after he had drawn his sword against King Philip. But in Act Four Rodrigo proved his loyalty to the imprisoned Carlos, revealing that he had taken the blame for the rebellion in Flanders, thus freeing Carlos to pursue the Flemish cause – but ensuring his own imminent death (‘Per me giunto è il dì supremo’). Rodrigo is indeed immediately shot by an agent of the Inquisition and dies in Carlos’s arms, bidding his comrade a touching farewell (‘Io morrò’).

Notwithstanding Alagna’s and Keenlyside’s fine performances, from the point when Ferruccio Furlanetto appeared, one might as well have renamed the opera “King Philip”, so powerful and mesmerising was his singing and acting. This was as nearly perfect an operatic performance as I have experienced. Furlanetto’s voice was richly resonant and penetrating, running a wide emotional gamut that included domination, arrogance, anger, frustration, isolation, guilt and despair. His extended soliloquy (‘Ella giammai m’amò!’), introduced by resonant cellos at the beginning of Act Four, was the highlight of the evening, as Furlanetto’s voice ranged from shattering declamation to shimmering pianissimo. 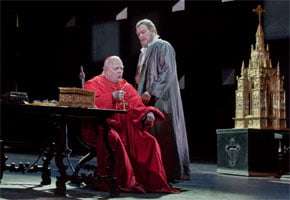 Furlanetto was also outstanding in several scenes in which Verdi pitted other low male voices against the King’s, always to brilliant effect. These included King Philip’s scenes with Rodrigo and Eric Halfvarson’s powerful Grand Inquisitor, as well as the auto-da-fé scene in Act Three, in which Philip imperiously rejected the pleas of the six Flemish deputies – a bass, two bass-baritones and three baritones. Further adding to the plethora of deep voices was the excellent Alexei Tanovitsky, making his Met debut in this production as “A Friar”. (This role was billed at ROH as “Carlos V”, which is consistent with the libretto’s stage directions.)

Keenlyside and Furlanetto were explosive in their encounter at the end of Act Two, in which Rodrigo berated the King for the oppressiveness of his rule in Flanders. When Philip wished for Flanders a peace like that enjoyed by happy Spaniards, “faithful to God and King”, and Rodrigo replied that this was ‘la pace è dei sepolcri’ (the peace of the tomb), a dissonant minor chord, rife with brass and percussion, was absolutely chilling.

Church-state conflict came to the fore in the Act Four duet in which the Grand Inquisitor, summoned by Philip to sanction a death sentence for Carlos, quickly seized control of the interview, threatening to bring the monarch himself before the Inquisition for protecting Rodrigo, whom the churchman denounced as a heretic and traitor. Potent electricity was generated by Furlanetto and Halfvarson in this scene as the accusations against Philip shattered his self-assurance and reduced him to pleading with the Inquisitor to overlook the King’s defence of Rodrigo.

The female principals were also fine, with Poplavskaya giving a particularly impassioned performance as Elizabeth, going from joy in her love duet with Carlos, her betrothed, to despair as she resigned herself to marrying Carlos’s father, King Philip, instead in order to ensure peace between France and Spain. Her regal bearing maintained the nobility of her character throughout the opera, and she varied the coloration of her voice beautifully as Elizabeth bade a touching farewell to her banished lady-in-waiting in Act Two, indignantly pleaded for justice from her husband in Act Four, and resigned herself to death and tenderly bade farewell to Carlos in Act Five. Poplavskaya’s close communication with Nézet-Séguin was particularly evident in her final aria (‘Tu, che la vanità’), which featured shimmering violins, a brass ostinato and a final touching pianissimo as she prayed for eternal peace in the tomb.

As Princess Eboli, Anna Smirnova, also making her Met debut, was charming in the Spanish-rhythmed ‘Veil Song’ (‘Nel giardin del bello’), foreshadowing Eboli’s midnight assignation with an unsuspecting Carlos in Act Three. When Carlos rebuffed her advances there, she realised that he loved the Queen and soon carried out her threat to denounce Elizabeth to Philip – an action that finally tore the royal family irreparably apart. In Act Four, Smirnova demonstrated both the richness of tone and vocal heft necessary to make Eboli’s remorseful ‘O don fatale’ a show-stopper, climaxing with a coda in which the princess voiced her determination to save Carlos.

Layla Claire, her Met debut too, was a sprightly and clear-voiced Tebaldo, adding fun to Eboli’s ‘Veil Song’. Others making successful Met debuts in this production were Tommaso Matelli (Inquisitor Priest), Anne Dyas (Countess of Aremberg) and Keith Harris, Tyler Simpson and Eric Jordan (Flemish deputies). The other deputies, Donovan Singletary, Christopher Schaldenbrand and Joshua Benaim, also performed well, as did Eduardo Valdes as the Count of Lerma and Jennifer Check as the celestial voice that welcomed the executed heretics into heaven.

Although the version of the opera performed here omits the woodcutter scene that opened the original Act One, the Met Chorus still had much to do and was excellent throughout.

The members of the production team are all making their Met debuts. Nicholas Hytner’s presentation of “Don Carlo” in five acts, with an abbreviated first act and two intervals, worked out to a quite acceptable four-and-a-half-hour evening. His straightforward conception of the opera is welcome in this era of ‘concept’ productions that often distract from an opera’s inherent qualities. Bob Crowley’s costumes and sets are attractive and appropriate to the opera’s period and action. The sets strike an excellent balance between abstraction and realism. The bare trees in the forest of Fontainebleau and the stylised trees and flowers of the monastery garden are simple, yet effective in defining their locales. Also quite effective is the repeated use of a descending wall between scenes with Carlos remaining in front of the wall as the action flowed continuously into the ensuing scene. The array of windows in that wall is also seen, from a different perspective, inside the monastery of St Just, with bright-light streaming through the windows onto the tomb of King Carlos V in the misty chapel – one of Mark Henderson’s excellent lighting effects. As the chorus of monks filed out, yet another perspective of the chapel was created by repositioning the tomb and dropping a diagonal row of monumental columns onto the stage to create the space in which Carlos and Rodrigo first meet. The most spectacular visual effects were in the auto-da-fé scene, performed in front of the golden facade of the Cathedral of Valladolid. A huge portrait of the face of the crucified Christ, bloody from his crown of thorns, served as a scrim behind which six heretics could be seen to go up in flames as Act Three ended.

Oddly, the only curtain-calls were for the six leading roles and Nézet-Séguin. This seemed unduly neglectful of the other singers and choristers, who had performed ably throughout.

Some videos from the Met’s “Don Carlo”: