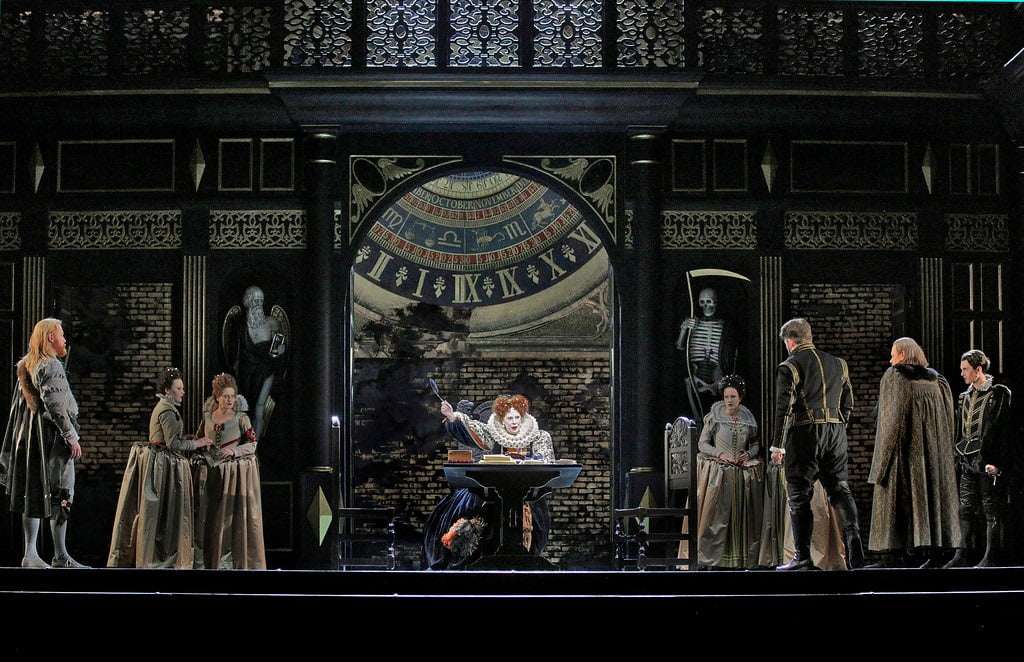 The Metropolitan Opera completes its presentation of David McVicar’s productions of Donizetti’s Tudor Queens trilogy with its first-ever staging of Roberto Devereux (Anna Bolena and Maria Stuarda were performed earlier this season.) Sondra Radvanovsky is singing the three titled roles, a task not attempted in New York since Beverly Sills more than forty years ago at the City Opera.

When Donizetti composed Roberto Devereux he had experienced several losses – the deaths of his wife, two children and his parents, all within a year. He poured his grief into deeply sensitive music that depicts the suffering of the aging Queen Elizabeth I caused by the apparent unfaithfulness of her lover, Robert Devereux. He is accused of treason for returning to London having been forbidden to do so. What the Queen doesn’t know is that Robert is in love with Sarah, whom she had forced to marry the Duke of Nottingham. Elizabeth had promised Devereux that a ring she’d given him would ensure his safety should he return it to her. When he bids Sarah a loving farewell, he gives the ring to her; in return she presents him a scarf. 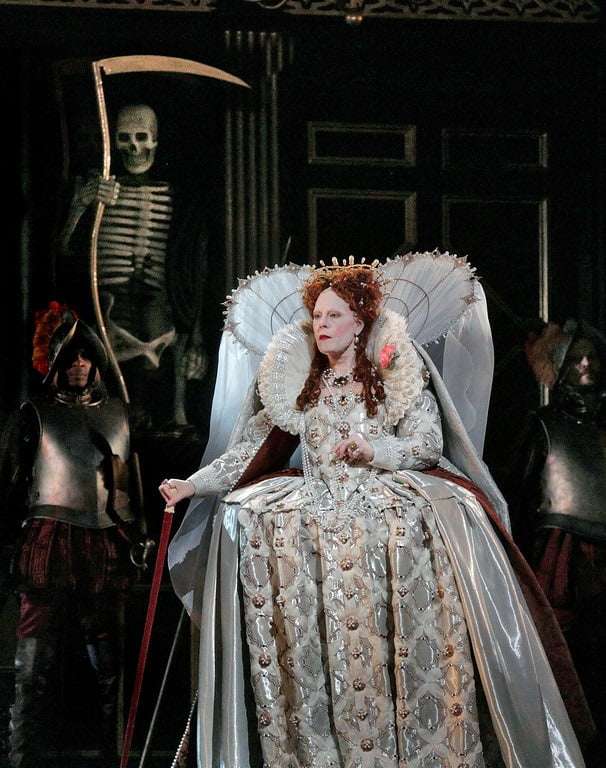 In Act Two, the Queen’s ministers discover the scarf in Robert’s apartments. Nottingham recognizes it as Sarah’s, and in jealousy he tells Elizabeth. She sends Devereux to the Tower. In the final Act, Elizabeth wants Devereux spared but cannot fathom why he has not returned her ring. Sarah rushes in with it, but is too late: Nottingham has intentionally delayed her arrival until after Devereux’s execution. Elizabeth, haunted by visions of Robert’s ghost and her own mortality, abdicates.

For the libretto Salvadore Cammarano took several liberties with history, mostly by having Elizabeth succumb to madness and expressing hope that James VI of Scotland will succeed her on the English throne. Other departures include Devereux’s arrest upon return from Ireland where he failed to foment rebellion, and making Nottingham a Duke rather than an Earl. McVicar also indulges in revisionism by changing the locale from Westminster to Nonsuch, a Tudor palace southwest of London.

A single, movable set serves the production, a large square inner chamber, its walls decorated with symmetrical designs in drab brown and gold. Statues symbolic of Life and Death stand on either side of the center door among black columns. Balconies are frequently occupied by members of the chorus, who sometimes chatter senselessly or applaud, distracting attention from the most intimate moments. Upstage sets the scenes in the apartments of Nottingham, Sarah, and Elizabeth, and in Act Three the same configuration serves as Devereux’s cell. Costumes are more appropriate for the eighteenth than the sixteenth century, yet they fit well with the design. During the Overture a body clad in white inexplicably appears atop a coffin. At the end of the opera this coffin reappears when Elizabeth laments Robert’s death. 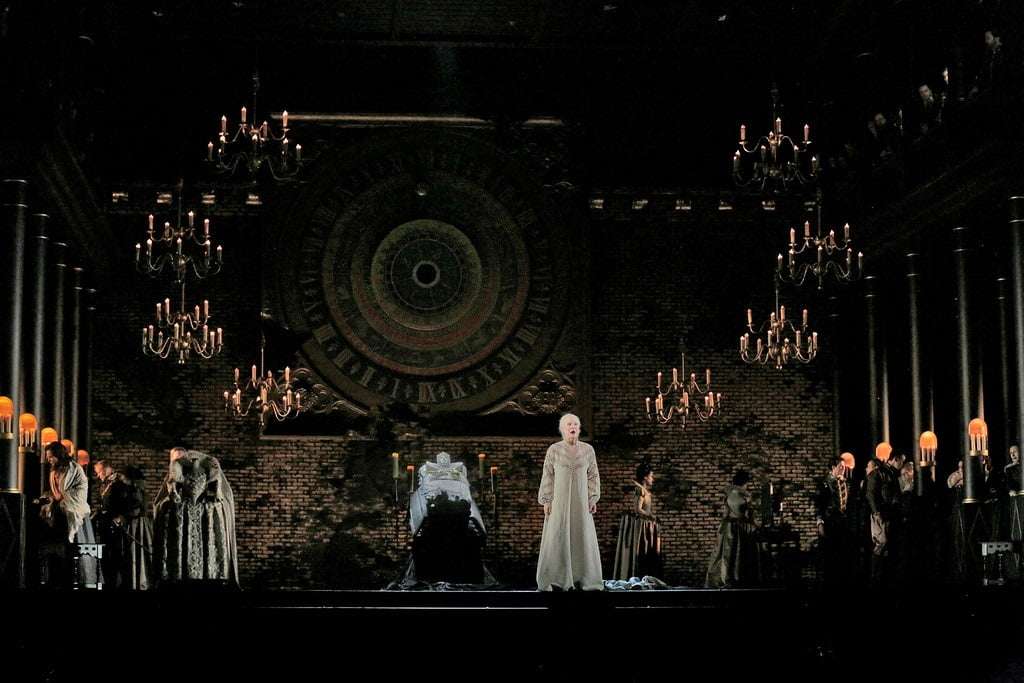 Roberto Devereux is challenging for the principals, and the singers were all splendid. Radvanovsky combined a vibrant, powerful voice, exquisite in mezzo voce, with a penetrating yet dignified characterization of the monarch’s moods. She maintained admirable self-control when pleading with Devereux, and revealed darker aspects as she lashed out at him for his faithlessness. Gradually driven mad by burning passion, raging fury and fear for her lover’s life, Radvanovsky’s Elizabeth maintained dignity until Devereux’s execution was too much for her to bear. Her ‘mad scene’ was overwhelming.

Elizabeth’s rival, Sarah, was sung superbly by Elīna Garanča. Her duet with Robert in Act One was exquisite; sweet and tender. Matthew Polenzani was a sympathetic Devereux, particularly impressive in Act Three’s ‘Tower Scene’. He was a fine match for Elizabeth, standing up to her wrath with fearless resolve to protect Sarah. The Nottingham of Mariusz Kwiecień was vocally sound, more fervent when expressing devotion to Devereux than in anger to Sarah’s infidelity. Brian Downen, in his Met debut, was rather meager as Lord Cecil, and Christopher Job acquitted himself well as Sir Walter Raleigh.

Maurizio Benini, an Italian-opera specialist, conducted a lucid and well-balanced performance, bringing out dramatic intensity while never overwhelming vocal lines. The Met Orchestra and Chorus were consistently superb. Hopefully, Roberto Devereux will not be consigned to oblivion again.