Verdi
Il trovatore – Opera in four acts to a libretto by Salvatore Cammarano after El Trovador by Antonio García Gutiérrez [sung in Italian with Met Titles in English, German and Spanish] 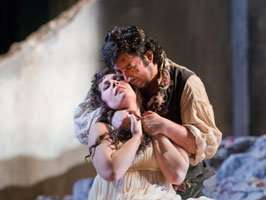 David McVicar’s highly-praised production of “Il trovatore” which first appeared at the Lyric Opera of Chicago in 2006, came to the Met in this splendid premiere performance. After two failed attempts at presenting a successful production, by Fabrizio Milano in 1987 and Graham Vick in 2000, the Met has finally mounted a production that does justice to Verdi’s often parodied yet deeply humane work of musical drama.

As every opera-buff knows, Verdi’s blazingly passionate melodrama is notorious for having one of the most convoluted and far-fetched plots in the annals of opera. It is also extremely difficult to cast. The roles demand top-class singers who combine extraordinary vocal power, beautifully poised tone and fine emotive discrimination. Caruso famously remarked that all “Il trovatore” needed to succeed was the four best singers in the world. While this Met cast may not quite reach Caruso’s demanding standard, this was by far the most beautiful and moving performance of “Il trovatore” I have ever attended. 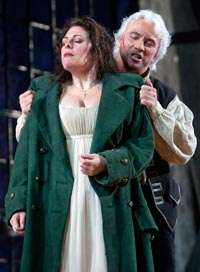 The company came up with a first-rate cast of experienced Verdians. All four principals were in very fine voice, but the stand-out performance was the tender, intensely expressive Leonora of Sondra Radvanovsky. Her opulent, evenly produced soprano was marked by dynamic shading and clean, well-centered tone. She was impressive throughout but especially in ‘Tacea la notte’ (The night calmly and peacefully in beauty seemed reposing), the Act One aria in which she tells the story of her love for the troubadour. Her ‘D’Amor sull’ali rosee’ (On rosy wings of love depart), the Act Four aria in which she sends her love through the prison walls to comfort her lover Manrico, provided one of the most memorable moments.

As the doomed hero, Manrico, tenor Marcelo Álvarez was a perfect match for Radvanovsky’s Leonora, whom he supported with beautiful, passionate singing. His voice was full of heartfelt warmth and full-throated lyricism. ‘Di quella pira’ (See the pyre blazing), in which he abandons Leonora as he is about to marry her in order to try to rescue Azucena, had a wonderfully bright ping.

The other men in the cast were also excellent. Baritone Dmitri Hvorostovsky was formidable and handsome as the villainous Count di Luna, Manrico’s nemesis and, unknown to both, brother. His performance was splendid, both vocally and dramatically. ‘Il balen del suo sorriso’ (Bright her smiles), where he tells of his great love for Leonora, was delivered with remarkable tenderness and passion. As Ferrando, Count di Luna’s captain, bass Kwangchul Youn brought unusual authority to this supporting role. 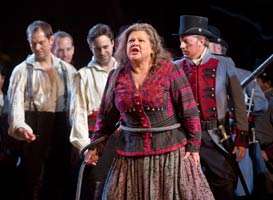 As the gypsy Azucena, Dolora Zajick took on the role in which she made her Met debut in 1988 and which she has dominated ever since. Her rich, penetrating mezzo-soprano easily commanded the role’s difficult range, and she gave a passionate, dramatically forceful performance, full of vengeful ferocity. The Met Chorus delivered wonderfully clear and ardent singing throughout, but especially in the imaginatively staged Anvil Chorus of Act Two, in which shirtless musclemen struck large anvils in perfect rhythm and obvious delight.

The effectiveness of this performance owes a great deal to the impressive staging. David McVicar has left the setting in Spain, but updated it from the early fifteenth-century to the time of the Peninsular War (1808-1814). The sets by Charles Edwards take their visual inspiration from Francisco Goya, in particular his prints “The Disasters of War” with their haunting depictions of that period, and his disquieting series of “Black Paintings”, produced towards the end of the artist’s life. A detail from his harrowing painting “Pilgrimage to San Isidro” serves as the show curtain and mood-setter for McVicar’s wonderfully atmospheric and brilliantly directed production. The massive scenery is more expressive than realistic. A high wall cutting across the stage serves variously as the backdrop for Count di Luna’s palace, a garden of that palace, a gypsy camp, the courtyard of a convent, and a prison. Mounted on a turntable, the imaginatively designed sets minimise scene changes and keep the action of the drama flowing.

Brigitte Reiffenstuel’s monochromatic costume designs also take their inspiration from Goya, especially for the gypsies. The appropriately darkish lighting by Jennifer Tipton highlights the grimmer aspects of the story and suits the drama perfectly. Under Gianandrea Noseda, the Met Orchestra played with sublime power and eloquent nuance, never overpowering the excellent singers. Altogether, this was a thrilling, superbly realized performance that brought Verdi’s glorious and powerful score vividly to life.