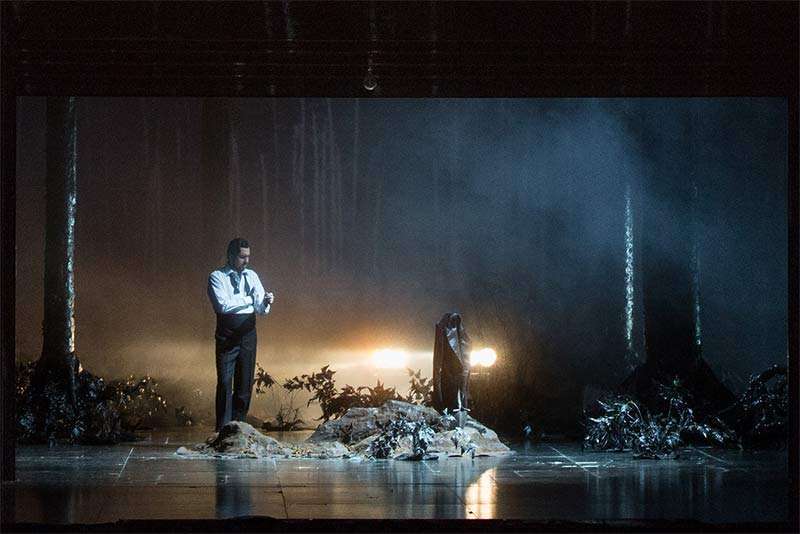 Iolanta and Bluebeard’s Castle make odd bedfellows. Both are based on fairy tales, yes, but Tchaikovsky’s ardently tuneful opera about the healing power of love seems rather far removed from Bartók’s macabre tale of obsession and murder. Or is it? In this new double-bill at the Metropolitan Opera, Mariusz Treliński makes the case that there are deeper connections between these disparate works. His staging of the two operas underscores the point that both Bluebeard and Iolanta live in worlds of darkness – Bluebeard in his sunless castle and Iolanta in her blindness.

Treliński has said that this production was inspired by noir films of the 1940s, and indeed the stark visual element in the two operas is notably devoid of color. This approach is especially successful in Bluebeard’s Castle”, not just because its richly enigmatic plot is a precursor to the noir style but also since so many elements of Bartók’s score were appropriated by legions of film composers. It’s a natural fit. 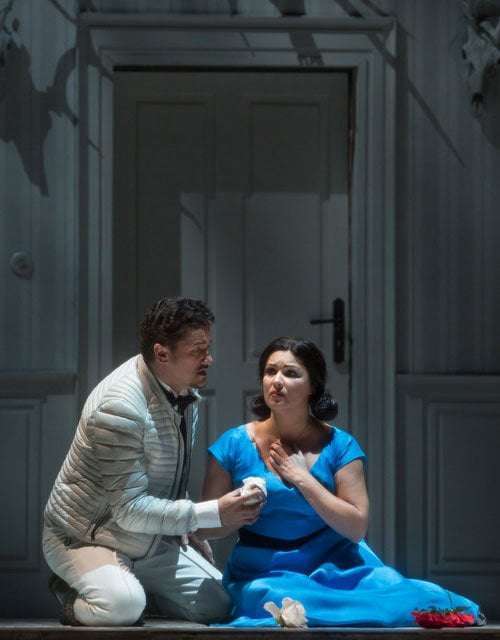 Tchaikovsky’s opera is a different story, however. In this Iolanta the blind princess is held captive in a small, sparsely furnished cabin in the middle of a dense, dark forest – not the enclosed, enchanted garden specified in the libretto. Indeed, Boris Kudlička’s scenic design put me in mind of Wagner’s Siegfried”, which is curious, as in Iolanta Tchaikovsky purposely set out to write an anti-Wagnerian opera.

Even in that joyous moment when Iolanta’s blindness is cured, there is light but no color, just bleached rays of white searchlights. Most of the characters are dressed in black, too, except for the white-clad Vaudémont, whose love ultimately gives Iolanta her sight. There are also images that are simply odd, like the video projection of a larger-than-life deer at the opera’s start, or Duke Robert’s second appearance with skis in hand, or the jubilant choristers who crowd in at the end, dressed in black vests and big white aprons, as if every bistro waiter in town showed up to celebrate Iolanta’s miraculous cure.

Watching Iolanta (which to my surprise is presented first), I became increasingly convinced that the visual element was at odds with the music. Iolanta is certainly not Wagner; it’s not even a tragedy like Pique Dame (written a year earlier). In fact, it was originally presented alongside The Nutcracker and shares some of that ballet’s colorful élan. Musically, too, the Met’s version drained the score of much of its froth and fun. Valery Gergiev conducted with a particularly heavy hand, molding and sculpting with obvious love but to frankly tedious effect.

Luckily, I guess, the singing was the best aspect. I find Piotr Beczala’s upper register a tad pinched, but he is a communicative artist who can caress a phrase and win your heart. (The elderly female subscriber sitting next to me was clearly a fan by the end of the love duet.) The smaller roles were consistently fine. The firm fruitiness of Mzia Nioadze’s tone was a delight, and Elchin Azizov imbued Ibn-Hakia, the Moorish doctor, with a burning spiritual intensity. Only Ilya Bannik, filling in for an indisposed Alexei Tanovitski as King René, failed to impress; his small voice was often swamped by the orchestra.

Anna Netrebko was simply terrific. She took some time to warm up, but once she did, she sang gloriously. Her voice had luster, body, creaminess and suggested vulnerability as well as vibrancy. I assume that the moments where she lurched about, arms outstretched, would not be endorsed by the American Foundation for the Blind, but were part of Treliński’s direction. At least the audience didn’t laugh. Its members did, however, when Duke Robert and Vaudémont reunite with a high five. 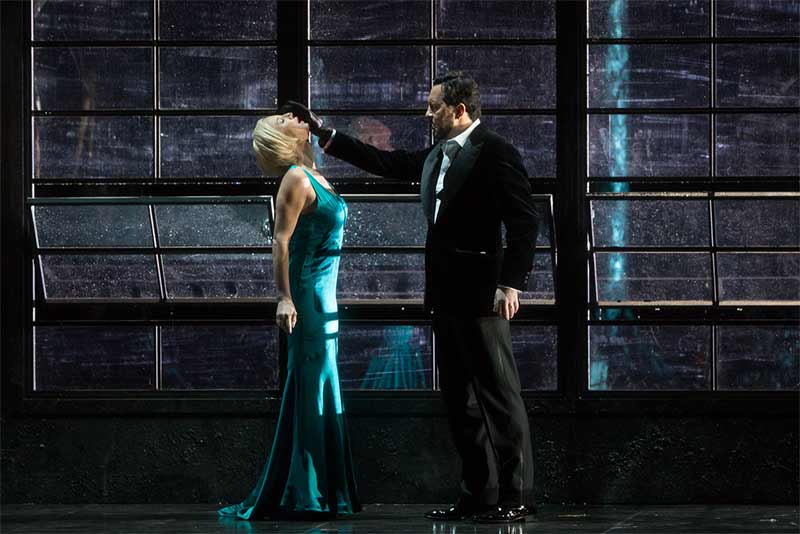 I will admit that after seeing Bluebeard’s Castle, I felt I better understood Treliński’s dark vision for Iolanta. He uses some of the same images in both productions, which helps bind the two works visually, at least. For example, the forest outside Iolanta’s cabin is made up of trees that seem to hang by their branches from an invisible sky, roots hovering several feet above the forest floor. These reappear when Bluebeard reveals to Judith his kingdom behind the ‘Fifth Door’. And seeing them again, I thought: “Oh, I see!”. I don’t mean to suggest that Treliński’s Iolanta somehow works in the full context of the double bill, merely that you can kind of see what he’s getting at, and despite some of the oddities and missteps, his interpretation is thoughtful and imaginative in its way.

Bluebeard’s Castle, on the other hand, goes from strength to strength. I was annoyed by the melodramatic pre-recorded recitation of the ‘Prologue’, and by the creaky, spooky, horror-movie type sounds that accompany the video projections at the beginning – especially as they cover the orchestra’s opening bars. I was also puzzled by Judith’s arrival at the castle by car, though in retrospect, the appearance of the headlights from afar is quite wonderful. And from there, I was bewitched.

There are too many striking visual images to recount here, so I’ll mention just two. First is the opening of the ‘Third Door’, where we find Judith bathing naked in what is perhaps a steaming bathtub of jewels within a room of dark green marble. It’s a painterly scene, at once provocative and plainly beautiful. Second is the pool of tears behind the ‘Sixth Door’, set in a white-tiled room that doesn’t seem like much at first, until the video projections make the tiles swim in and out of focus. Hitchcock would have been proud.

Musically, too, Bluebeard is a success. Mikhail Petrenko is not the most imposing of Bluebeards. Indeed, at times his tone can be too soft-grained, too gentle for such a powerful character. But this softness also made him more human, and allowed Judith to appear as his equal. And what a Judith! Nadja Michael’s voice amply filled the Met’s large auditorium without the least hint of shrillness. Her phrasing was as dynamic and supple as her physical movements. She was strong yet tragically insecure, a nag but also sexy as hell. She is the best Judith I’ve heard either live or on disc.

Gergiev softened some of the music’s rhythmic rough edges, but the kind of careful expressive molding and shaping that bogged down Iolanta ultimately served Bartók quite well. The final scene was especially moving, full of yearning and a transfiguring sadness. The Orchestra played its hearts out for him.