Berg
Lulu – Opera in a prologue and three acts to a libretto by the composer after the plays Erdgeist and Die Büsche der Pandora by Frank Wedekind [performed with Act III realized by Friedrich Cerha; sung in German with English MET titles] 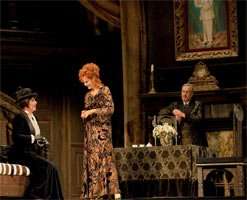 The very first time I went to the Met, it was for Berg’s “Lulu”. That was in 1988. Catherine Malfitano sang the title role, with James Levine conducting. I was a student at the time, and could only afford a standing-room ticket. Audience members started fleeing the auditorium early on, however, so by the first intermission I’d nabbed a prime orchestra seat. A few people left at the first intermission of this 2010 revival, but not many, for which I credit the Met’s state-of-the-art titling system. Berg’s highly conversational yet dramatically taut libretto is good theatre, and would likely be gripping even without the music. In this work, being able to follow every line is a godsend.

Surely Marlis Petersen’s exceptionally sympathetic portrayal of Lulu deserves credit, too. Her voice is light, almost airy-sounding, yet it carries well. She’s able to negotiate the high-lying passages with startling ease, and move nimbly through the thorniest melodic knots. Indeed, her Lulu was as charmingly childlike as I can imagine, full of innocence, incredulity, and driven by a desperate desire to be loved. It helps, too, that Petersen looks the part: tall, slender, and graceful in her movements. 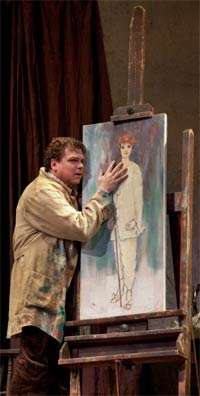 The other principals were just as convincing. James Morris’s Dr Schön was aptly authoritarian yet also aristocratic – an impression conveyed by both his stentorian tone and clear articulation. And Morris and Petersen have what Hollywood types call chemistry. Their confrontation in Lulu’s dressing room at the end of Act One was excruciatingly intense, as it was again in the opera’s final scene, where Morris returns as Jack the Ripper.

Gary Lehman played Alwa (Schön’s son) as a proverbial deer caught in the headlights. Helpless, hapless, his (purposefully, I assume) awkward stage movements combined with his sweet-toned, deeply-felt singing made him seem even more selfless in his devotion to Lulu than the Countess Geschwitz. Though Anne Sofie von Otter’s Countess was, in fact, a fascinating and utterly riveting character study. By turns haughty, sly, seductive, audacious, and (ultimately) anguished — von Otter’s Countess seemed a bundle of contradictions, and thus came across as the most convincingly human of all. Otter’s voice is rather thicker than it once was, and her response to Lulu’s murder was more a scabrous cry of despair than the purifying benediction one usually encounters at the opera’s close. But that in itself seared her performance into my memory. 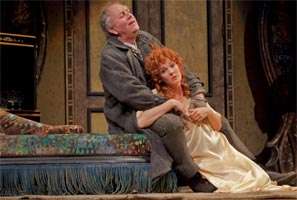 Gwynne Howell made a very rich-toned, almost too youthful Schigolch, a character I’ve always thought of as a frayed and dissolute geezer. No matter; it worked. Howell’s vocal and physical robustness gave Schigolch a strange omniscience. He alone held the key to the puzzle that is Lulu, I was sure of it.

Other standouts were Bradley Garvin as the Acrobat (and Animal Trainer), who epitomized testosterone-poisoned machismo not only vocally, but in his bearing and deportment, too. Michael Schade showed his theatrical range as the Painter (a tortured artist par excellence) and the African Prince (cartoonishly savage, as Berg wrote it). Graham Clark’s pleasantly piercing tone and mercurial body language worked well as the Prince who woos Lulu in Act One, and even better as the smarmy, nefarious Marquis in Act Three. Ginger Costa-Jackson was appropriately and impressively earnest in both her trouser-roles: Schoolboy and Page.

Most impressive of all, however, was Fabio Luisi, who has taken the musical reins at the Met during James Levine’s current convalescence. “Lulu” has been Levine’s opera at this house since it was first performed here (in its incomplete form) in 1977. And it’s the kind of work Levine does extremely well — digging in to find the strong, knotty dramatic musculature that lies beneath the score’s immense textural complexities.

Luisi takes a different tack. There were moments that were overwhelmingly powerful, of course, like the interaction between Lulu and Jack the Ripper, which was built masterfully as one long, emotional crescendo. Yet, leavening this were long stretches that lilted and danced with echt-Viennese graciousness. It was oddly alluring – as alluring, one might say, as Lulu herself is to those around her. Was it Expressionistic? Absolutely. Especially in combination with John Dexter and Jocelyn Herbert’s staging, with its claustrophobic sense of space and visual angularity. Yet, as Luisi elegantly shaped and sculpted the score, I kept thinking of Mozart, and wondering if Lulu might be the female counterpart to Don Giovanni. Food for thought, at least. And yet another reason to cherish the Met’s latest revival of Berg’s masterpiece.