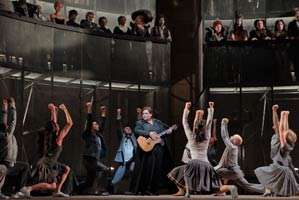 Reviews of the first performance of this season’s run of Gluck’s “Orfeo ed Euridice” rhapsodised about mezzo-soprano Stephanie Blythe’s first-ever performance in the touchstone trouser role of Orfeo. Writing in the New York Times, Anthony Tommasini described her portrayal as “vocally commanding and deeply poignant”, and Mike Silverman’s effusive Associated Press review dubbed her “an Orfeo for the ages.” As a close follower of Blythe’s career since her first appearance at the Met in the 1994 National Council Winners Concert, I was very much looking forward to seeing how she would use her commanding voice in the title-role of the mythic musician who ventures into the underworld to recover his wife, Euridice, from the dead. I was disappointed to find that Blythe was ill for this performance. Instead, Kirstin Chávez, a young mezzo-soprano (who made her company debut in 2005 as Mercédès in “Carmen” and was most previously heard at the Met in the 2006-2007 season as Bersi in “Andrea Chenier”) would sing the role of Orfeo.

Originally written for a male castrato, nowadays Gluck’s Orfeo is usually sung by a mezzo. A notable exception was the premiere run of this 2007 production, which featured countertenor David Daniels, the first and only man to sing the role at the Met. Since the company first presented the opera, on tour in Boston in 1885, “Orfeo ed Euridice” has been a showcase for some of the most famous voices in the Met’s 125-year history, including the great contralto Louise Homer from 1909 to 1914 and the legendary mezzo Marilyn Horne in 1972. 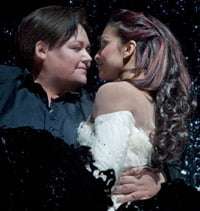 The role demands an especially gifted singer-actor, one who can effectively convey the superhuman grief of Orfeo, especially in Gluck’s most famous aria, ‘Che faro senza Euridice’ (What will I do without Eurydice?) in spite of music based on less than obviously sorrowful-sounding harmonies. Unfortunately, Kirstin Chávez failed to come up to the task. She made a youthful and attractive Orfeo, costumed like a rock-and-roll singer in a black suit and carrying a guitar over her shoulder, but her bright mezzo was not especially characterful, and she sounded marginally uncomfortable in the lower-lying phrases. Singing sweetly she lacked the vocal richness that the role requires, and her acting skills were insufficient to render Orfeo’s full bitterness and anger at Eurdice’s death.

Heidi Grant Murphy, reprising her role as Amor, the god of love who allows Orfeo to descend into the land of the dead to retrieve Euridice, was also disappointing. Her perky and mischievous Amor, clad in gray jeans and a pink tee-shirt, was mostly sweet-toned but at times came across as surprisingly thin and frayed, especially in Act Three when she reappears to revive Euridice a second time. 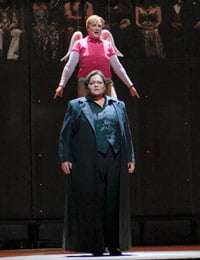 As Euridice, Orfeo’s beloved wife, Danielle de Niese, wearing a gracefully flowing white gown, was strikingly beautiful, dramatically convincing and vocally splendid. Very feminine, but forceful and fervent in her delivery, her lustrous soprano provided the best individual singing. She was most effective in the beautifully crafted ‘Vieni, apagga il tuo consorte’ (Come and calm your husband’s fears), the fraught duet with Orfeo in the dark labyrinth, in which she demands to know why he will not look at her as he tries to lead her back to earth.

The Metropolitan Opera Chorus was magnificent. Wonderfully clean and stylish throughout the performance, the 90-member group, each dressed as a different historical personality — from Moses to Beethoven to Diana, Princess of Wales — delivered an appropriately dramatic and massive sound when required.

The fanciful production, directed and choreographed by Mark Morris, incorporates dance in a major way. Dressed in casual modern attire designed by Isaac Mizrahi, the eighteen or so dancers of the Mark Morris Dance Group, plus additional dancers from the Metropolitan Opera Ballet, serve as active participants in the drama, portraying the various nymphs, shepherds, furies and spirits who interact with the three main characters throughout the course of the narrative.

James Levine conducted an elegant, rather restrained, account of score, based on Gluck’s original version. The unusually concise piece was presented in a single 90-minute-span with no interval. There were some arresting moments — provided mostly by the magnificent choral singing and the brief but powerful appearance of Danielle de Niese, but overall what emerged was too often lifeless and failed to provide the essence of Orfeo.