The Orchestra of the Metropolitan Opera
Fabio Luisi 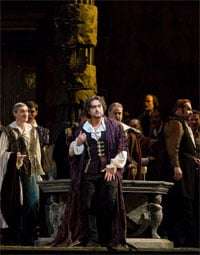 As James Levine’s career is winding down due to ongoing physical problems, Fabio Luisi is coming under ever-increasing scrutiny as the MET’s prospective next Music Director. Over the last few seasons he has given impressive performances in repertoire ranging from Mozart to Berg; the orchestra supports him, and he certainly has the experience required for the position. Setting brisk tempos, he kept moving things along in ‘Questa o quella’, refusing to give in to Giuseppe Filianoti’s attempts to linger. At the end of Act One, he knew to look into the wings to check whether Željko Lučić was ready for his entrance. As the Rigoletto had not been called to the stage in time, Luisi delayed the start of the next scene. The music came to a halt, until he eventually decided to go ahead, have Lučić catch up when he did appear, and sort out things as they happened, without the audience being the wiser.

Routine, however, is not all Luisi has to offer. Even in this well-worn production he made the orchestra sound fresh and engaged, well-balanced and colorful. He knows when to tighten the reins to propel the action and whip-up excitement to carry the singers along, but also when to relax and simply accompany beautiful artistic expression. Gilda’s music falls mainly into the latter category. Diana Damrau could not have asked for a more sympathetic partner in her sensitive performance. Her ‘Caro nome’ was the perfect innocent young girl’s expression of infatuation, showing off her lyrical soprano to its best effect. All evening she impressed not only with the sheer beauty of her voice, but also with her intelligent, musical and colorful interpretation of the role. 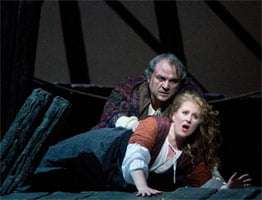 Lučić is a tall, muscular jester, and he has a voice to match. His middle register is powerful, with an appealing roundness of tone, and the intensity of his performance even carried one past his weaker high notes and the occasionally slightly sagging pitch. Filianoti, though, was struggling most of the performance. He has a small voice which he unsuccessfully forced in an attempt to match the power of the other main characters. While at first he sounded merely strained, with a tight vibrato, by the final act his voice could no longer meet the demands he placed on it and he cracked twice in ‘La donna è mobile’. Stefan Kocán, however, easily projected with a resonant, focused bass, and he was quite convincing as the murderous Sparafucile. Nancy Fabiola Herrera similarly gave a fine performance as his sister Maddalena, a very appealing mezzo-soprano, while Quinn Kelsey wasn’t quite strong and menacing enough as the cursing Monterone. The minor roles were handled well.

While the MET is in the middle of staging a ground-breaking “Der Ring des Nibelungen”, directed by Robert Lepage using “the machine”, “Rigoletto” also remains one of the bastions of very traditional Grand Opera. This Otto Schenk production is using an alternate version of Zack Brown’s original scenic design, which was last seen in 1990. On realistic sets of the palace, Rigoletto’s house and Sparafucile’s lair, complete with a moonlit sky, the singers are dressed in colorful period costumes. In this day and age it almost looks quaint.

A video clip from The MET’s “Rigoletto”: