Skip to content
LnRiLWNvbnRhaW5lcltkYXRhLXRvb2xzZXQtYmxvY2tzLWNvbnRhaW5lcj0iNmIzNDMzNmNmZTc3NWZiNGJlMTVjMmIwMzU3NWM1MjYiXSB7IHBhZGRpbmc6IDI1cHg7Ym94LXNoYWRvdzogNXB4IDVweCAxMHB4IDAgcmdiYSggMCwgMCwgMCwgMC41ICk7Ym9yZGVyOiAycHggZG90dGVkIHJnYmEoIDEwOSwgMTA4LCAxMDgsIDEgKTsgfSAudGItZmllbGRbZGF0YS10b29sc2V0LWJsb2Nrcy1maWVsZD0iODM3Y2ExZjc0MGRjZDdkOTdlMzQzOWMyYjIwMWZmZTMiXSB7IGJhY2tncm91bmQtY29sb3I6IHJnYmEoIDIzOCwgMjM4LCAyMzgsIDEgKTtwYWRkaW5nLXRvcDogMTBweDtwYWRkaW5nLWJvdHRvbTogMTBweDtwYWRkaW5nLWxlZnQ6IDEwcHg7IH0g
LnRiLWNvbnRhaW5lcltkYXRhLXRvb2xzZXQtYmxvY2tzLWNvbnRhaW5lcj0iNmIzNDMzNmNmZTc3NWZiNGJlMTVjMmIwMzU3NWM1MjYiXSB7IHBhZGRpbmc6IDI1cHg7Ym94LXNoYWRvdzogNXB4IDVweCAxMHB4IDAgcmdiYSggMCwgMCwgMCwgMC41ICk7Ym9yZGVyOiAycHggZG90dGVkIHJnYmEoIDEwOSwgMTA4LCAxMDgsIDEgKTsgfSAudGItZmllbGRbZGF0YS10b29sc2V0LWJsb2Nrcy1maWVsZD0iODM3Y2ExZjc0MGRjZDdkOTdlMzQzOWMyYjIwMWZmZTMiXSB7IGJhY2tncm91bmQtY29sb3I6IHJnYmEoIDIzOCwgMjM4LCAyMzgsIDEgKTtwYWRkaW5nLXRvcDogMTBweDtwYWRkaW5nLWJvdHRvbTogMTBweDtwYWRkaW5nLWxlZnQ6IDEwcHg7IH0g
Rossini
La donna del lago – Opera in two Acts to a libretto by Andrea Leone Tottola, based on The Lady of the Lake by Sir Walter Scott [sung in Italian with English Met Titles by J. D. McClatchy]
LnRiLWNvbnRhaW5lcltkYXRhLXRvb2xzZXQtYmxvY2tzLWNvbnRhaW5lcj0iNmIzNDMzNmNmZTc3NWZiNGJlMTVjMmIwMzU3NWM1MjYiXSB7IHBhZGRpbmc6IDI1cHg7Ym94LXNoYWRvdzogNXB4IDVweCAxMHB4IDAgcmdiYSggMCwgMCwgMCwgMC41ICk7Ym9yZGVyOiAycHggZG90dGVkIHJnYmEoIDEwOSwgMTA4LCAxMDgsIDEgKTsgfSAudGItZmllbGRbZGF0YS10b29sc2V0LWJsb2Nrcy1maWVsZD0iODM3Y2ExZjc0MGRjZDdkOTdlMzQzOWMyYjIwMWZmZTMiXSB7IGJhY2tncm91bmQtY29sb3I6IHJnYmEoIDIzOCwgMjM4LCAyMzgsIDEgKTtwYWRkaW5nLXRvcDogMTBweDtwYWRkaW5nLWJvdHRvbTogMTBweDtwYWRkaW5nLWxlZnQ6IDEwcHg7IH0g 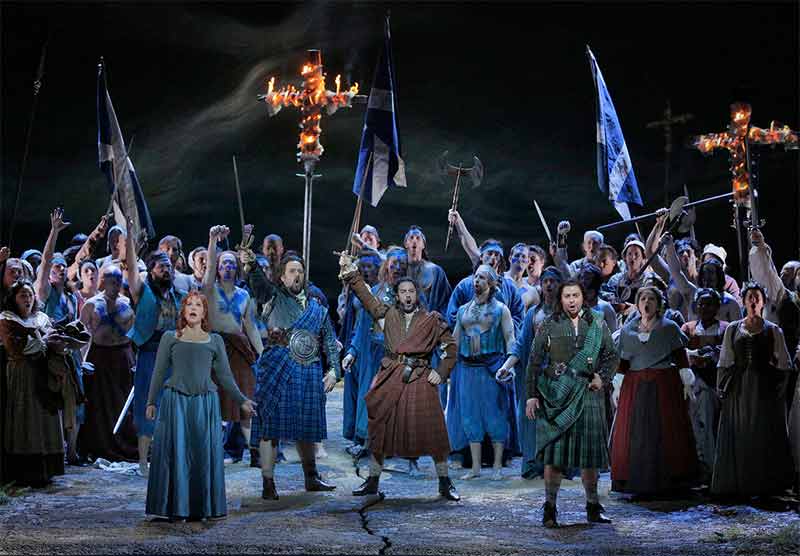 La donna del lago was created less than a decade after the publication of Sir Walter Scott’s narrative poem, The Lady of the Lake. Rossini composed the opera in just a few months in the summer and fall of 1819 in order to fill a gap in the schedule of the Teatro San Carlo in Naples, commissioning an Italian libretto by Andrea Leone Tottola based on a French translation of the Scott. This was one of nine opere serie that Rossini created for San Carlo, and the first of many Romantic-era operas based on Scott’s writings, the most-famous being Donizetti’s Lucia di Lammermoor. Despite the early success of La donna del lago, it soon fell out of the standard repertory and is only now receiving its Metropolitan Opera premiere.

Rossini’s score is rich in lovely melodies, dramatic tension, and vocal pyrotechnics – this last aspect making it notoriously difficult to cast effectively. The Met’s cast proved more than up to those challenges. Joyce DiDonato was glorious in the title role, maintaining beauty of tone and elegant phrasing even when singing the ornamented figures that pervade the vocal line. Her sweetly-sung cavatina ‘Oh mattutini albori!’ served to introduce her character, and her spectacular rendition of ‘Tanti affetti’ brought the opera to a brilliant finish. 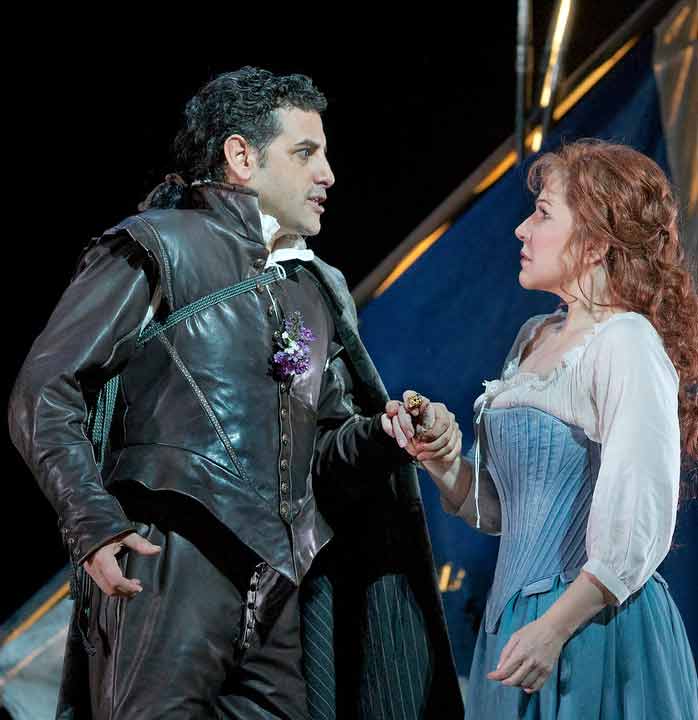 Juan Diego Flórez was in top form, tenderly lyrical in ‘Oh fiamma soave’ and generating electricity in his duets with DiDonato. He dashed off his high notes with ease, including a high D in his vocal duel with tenor John Osborn, who hit many a high note of his own as a powerfully defiant Rodrigo. Daniela Barcellona was brilliant in the kilt role of Malcolm, maintaining a clear timbral distinction between her part (written for contralto) and that sung by sister-mezzo DiDonato. Oren Gradus was steady as Duglas, Elena’s father, and Olga Makarina, Eduardo Valdes and Gregory Schmidt gave capable performances.

Paul Curran’s production, first staged at Santa Fe in 2013, is straightforward and effective, with Kevin Knight’s set- and costume-designs adhering to the 16th-century setting. Most of the action is set atop a platform of rough terrain, the front portion of which parts to permit Elena’s cottage to rise to stage level in the opening Act, and again at the opera’s end to reveal a red-carpeted anteroom to the royal court. Inserted into the platform are flowers picked by Elena as she sings her opening cavatina, and – when Rodrigo’s rebellious highlanders gather – dark blue banners with white saltire crosses, pikes topped with the heads of decapitated foes, and tall, burning crosses.

When bare-limbed trees were inserted into the platform to create a forest (as a substitute for the cave in which Malcolm hides), it was a misstep to have them borne by warriors rising and advancing from the back of the platform, thereby diverting attention away from the action to consider whether trees must move forward in every opera set in Scotland. Apart from the opera’s title and the text of the libretto there is no trace of Loch Katrine or of Elena’s boat, although Driscoll Otto’s background projections and lighting by Met veteran Duane Schuler suggest a misty highland atmosphere. A brief but highly effective moment was the streaking of a meteor across the sky just after the ‘Chorus of the Bards’ (with affecting harp and low strings) at the end of Act One, taken by the Highlanders as a favorable omen as war breaks out. Warriors are clad in the tartans of their respective clans and peasant women wear homespun clothing. Uberto, the disguised King James, is at first dressed in dark leather as a gentleman hunter, but wears a floor-length gold-brocaded robe when he appears in the throne-room attended by courtiers clothed in matching tones.

Michele Mariotti led the Met Orchestra in a first-night account that brought both romantic and dramatic moments vividly to life. The nicely managed use of off-stage horns was atmospheric.