Tchaikovsky
The Queen of Spades [Pique Dame] – Opera in three acts to a libretto by Modest Tchaikovsky and the composer based on the novella by Alexander Pushkin [sung in Russian with Met Titles in English, German and Spanish] 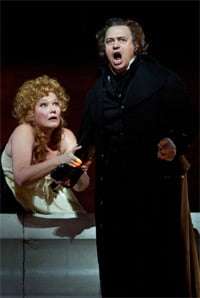 It was Gustav Mahler who conducted the US premiere of Tchaikovsky’s “The Queen of Spades” in 1910, and it has been revived periodically since. The current production by Elijah Moshinsky was introduced in 1995 with an all-star cast – Ben Heppner, Karita Matilla, Leonie Rysanek, and Dmitri Hvorostovsky in his Met debut, with Valery Gergiev conducting. Mark Thomson’s set reduces the vast stage of the Met into a central box – enclosed by a giant-size picture frame – which extends into the distance as a square, a dark tunnel. He ingeniously changes the back as needed – it is an open space in the beginning, an oversize lace curtain denotes Lisa’s room and a large golden door transforms it into an elegant St Petersburg ballroom. When the noble couples file in at the start of Act Two, the spectacle even drew applause, as did the tableau of the gambling house in the opera’s final scene.

The stage remains sparsely furnished – chairs, a piano, a large painting of the countess as a young woman, Hermann’s bed, the gambling table; as the singers are in period dress, however, this production is far from abstract and perfectly evokes the feeling of 18th-century Russia, especially in Act Two. The ‘Pastorale’ is ingeniously staged on a small stage within the stage, featuring three pairs of dancers, pages, and even a few children dressed as sheep. Dina Kuznetsova shone as Chloë, the Faithful Shepherdess, with an impressive, rich soprano voice. Tamara Mumford was the appealing Daphnis, and also Pauline. 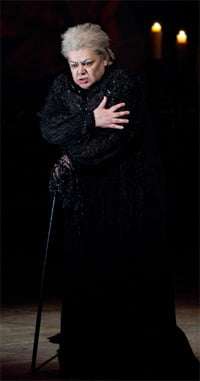 Karita Matilla, even at 50, credibly portrayed the young Lisa, which shouldn’t be surprising after her stunning Salome in the fall of 2009. Her voice may have lost some of its luster and warmth, and her soft singing lacks tonal center, but she still gave an artistically gripping performance. She was well matched in this respect by Dolora Zajick, who commanded attention whenever she appeared. Her still-vibrant voice was almost incongruous as that of the aged Countess, but then, this is opera. Among the men it was Alexey Markov whose singing stood out, a resonant, colorful baritone voice with an easy top and rich lower notes. Peter Mattei as Prince Yeletsky didn’t fare quite as well. His big aria ‘Ya vas lyublyu’, although artistically presented, showed some strain in the higher register.

Vladimir Galouzine in the principal role of Hermann presented a strange figure. His acting vacillated between a stiff stand-and-deliver approach and melodramatic gestures, neither of which made him very believable as either the tormented lover or the crazed gambler. His dark tenor voice never really had a ringing quality to it, even in the highest notes, and his Italianate sobs did little to convey true emotion. For the most part he was pleasant to listen to, but nothing more.

The Metropolitan Opera Chorus acquitted itself well, although more distinct diction and involvement would have been welcome. Tchaikovsky’s choral sonorities sung legato are beautiful, but they would have been enhanced by more contrast of expression. Confined to a smaller podium than at concerts, Andris Nelsons was obliged to modify his customary athletic approach to conducting. Although still crouching like a boxer, he had to forgo wild stabs and grandstanding and was limited to giving large beats, which at times were still quite distracting. He was obviously very intent on getting the drama of the work across, and he can draw a big, lush sound from the orchestra. However, it was when he didn’t try so hard, simply trusted the musicians and just molded the sound that the most beautiful playing emerged from the pit.