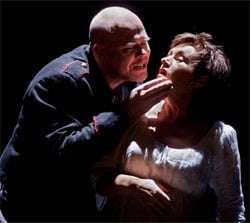 James Levine has had to cut back significantly on his conducting duties as he recuperates from surgery, cancelling all of his remaining engagements with the Boston Symphony Orchestra (from which he is stepping down as Music Director), and reducing his Metropolitan Opera appearances as well, most notably withdrawing from the season’s final two performances of “Das Rheingold”. Levine’s presence for this four-performance run of “Wozzeck” speaks volumes about his devotion to it. Mark Lamos’s production premiered in 1997 and was last performed here in the 2005-06 season. Each of the production’s five runs has been for only a few performances, but Levine has kept it in the active repertory owing to its importance as a landmark of twentieth-century opera. Every aspect of this performance was brilliant. Levine and the Met Orchestra gave Berg’s kaleidoscopic score a lucid reading, each instrument shining through. The cast was outstanding both vocally and dramatically, and the production itself is perfectly suited to this episodic allegorical tale and the music to which it is set. 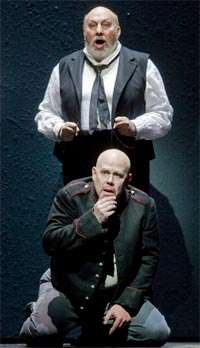 Alan Held was outstanding in the challenging title role, which he also performed here in the opera’s previous revival. (Matthias Goerne was originally engaged, but recent knee surgery forced him to withdraw.) Held, always secure in his leaping vocal line, portrayed Wozzeck as an “Everyman” character descending – but not plunging – into madness as he suffers one humiliation after another from the Captain, Doctor and Drum Major. This dramatic arc allowed tension to build effectively. Although taller than the Captain and the Doctor, Held’s cowering Wozzeck seemed to shrink in stature in their presence, thereby emphasising his powerlessness.

Waltraud Meier is singing Marie at the Met for the first time. She was superb – dramatically touching and vocally forceful and accurate. Meier reflected the ambivalence of Marie’s personality as she shifted among the different vocal styles called for by Berg’s score, ranging from speaking to singing, but most often in one of several gradations between those extremes. 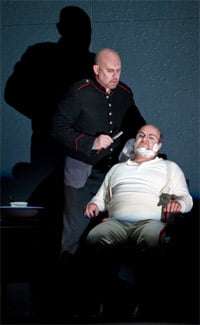 Gerhard Siegel gave an edgy portrayal of the fear-ridden Captain who mercilessly belittles the hapless Wozzeck, and Walter Fink’s megalomaniacal Doctor was sung with a powerful, resonant bass. Stuart Skelton, made an excellent Met debut as the Drum Major, combining bravado and coarseness in his advances to Marie and, later, in his drunken assault on Wozzeck. Also noteworthy were Russell Thomas as Andres, Wendy White as Margret, and Philippe Castagner in the brief role of the Fool. The remaining parts and the choral singing were all ably performed.

The production, sets, costumes, and lighting are ideally matched to the music and story. Lamos’s overall approach is for visual and dramatic simplicity that complements the rigorous score. Robert Israel’s sets consist of tall, blank walls that change positions and angles from one scene to another, with only minimal props to distinguish locales. This made it possible to effect smoothly the many quick scene-changes; most of Berg’s orchestral interludes are only about a minute long. Israel’s costumes are attractive and suggestive of the early-nineteenth-century. 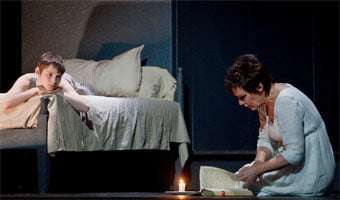 James F. Ingalls’s effective use of light and shadow creates a variety of moods, including dazzlingly reflected sunshine in the scene in which the coupling of Marie and the Drum Major is graphically depicted (a departure from Berg’s instruction calling for an empty stage before the Act One curtain falls). In the scene by the pond, as Marie remarks on how the moon rises red, the backdrop turns to a mottled crimson and remains thus in the later scene in which Wozzeck drowns, with the Captain and Doctor seen in virtual silhouette against the expanse of that color as they ignore the dying man’s moans.

As excellent as the singers were, the strongest praise of all must go to Levine and the Met Orchestra, the heart of the score being the interludes and which demand virtuosic playing. Each offered wonders. The strings were achingly beautiful preceding Marie’s initial scene, and in Act Two there were outstanding solos on cello, flute and violin. The brief but powerful link that followed the opera’s dramatic focal point, Marie’s murder, was also its most dramatic musical moment. First, a crescendo built to huge volume as one instrument after another joined in, all playing B natural. After a series of rapid drum-beats, a second crescendo ensued, still entirely on B, but this time with the entire orchestra playing together. The opera’s last (and longest) interlude combines melancholic strings with pungent brass and winds, growing in intensity as trumpets and trombones played above string tremolos. It finally gives way to the sound of innocent children at play, who rush off toward the murder scene, leaving Wozzeck and Marie’s orphaned child alone, uncomprehending of the tragedy that has befallen him. James Levine waved from the pit to acknowledge huge ovations before and after the performance.