A treasured memory from the St Magnus Festival a few years ago was Steven Osborne, playing not the greatest piano in the world, giving a quietly revelatory performance of Debussy’s ‘Voiles’ (from the Préludes). It was like hearing the piece for the first time, in all its elementary mystery. The same openness and directness infused Osborne’s recital of Schubert’s last three piano sonatas, but even so, I still think that just one of these large-scale, four-movement works is enough to form the basis of a programme. Together, with the implication that all three create a ‘last great thoughts’ sequence, they don’t exactly help each other, not even under the hands of a musician as fine as Osborne. All three make for a long concert, too – this one ended at 10 o’clock – and Schubert requires a very special sort of long-distance involvement.

That caveat aside, Osborne had all the resources required for these hugely demanding works – the Brucknerian tragedy of the first movement of the C minor, the gung-ho heroism of the A major’s first movement, the weird distraction of the C minor’s finale, and, in the slow movements, those extraordinary Schubertian slips from stand-and-stare wonder into time-bending transcendence.

I loved the decisiveness with which Osborne laid out the building blocks of the C minor’s first movement, their grandeur exploding into some of Schubert’s most-epic writing in any medium. Osborne’s intuitive forward-thinking found its expression in his formidable and controlled approach to the build-up and release of expectation, which underpins Schubert’s expansive structures with incredible strength. Another element of Schubert’s style that Osborne’s allusive intelligence brought to life so eloquently were those surprising slips into different keys, which he negotiated with such powerful insight. They were powerful enough in the first movement; in the finale, a whirl of frenetic energy, the two episodes in different keys had the effect of moving into parallel musical universes – Osborne really knows how Schubert fills space. 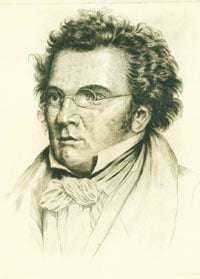 The pianist’s light wit was much to the fore in his grand but genial approach to the opening of the A major Sonata, especially at the moment of recapitulation, which was like saying in music, “Oh, so that’s where I left it.” The most lasting impression Osborne made, however, was in the way he caught the intense individuality of the slow movement. The distracted, isolated melody became like the character of a novel, who in the central section undergoes a painfully visceral crisis. This was playing that connected instantly to the individual; and, even more movingly, Osborne’s delivery of his romantically suffering character to the tender mercies of the gentle finale was beautifully achieved. Talk about an overview.

Similarly, in the B flat Sonata, Osborne’s treatment of the bass trills made them much more than devices nudging the music (almost herding it in some performances) into particular directions – they became a sort of spiritual guide, like a motto for the composer himself. That’s the thing about Osborne – his unmannered, lyrical playing and formidable technique (some of Schubert‘s writing is so hard to bring off) made it the most natural thing in the world to draw your own conclusions about the beguiling romance of these wonderful works, and, for all the self-imposed problems of the programme, the ley-lines of receptivity between player and audience were connecting just fine. There was no great standing ovation or encore. It was enough to have been so wised-up and enriched by this great pianist. Maybe a recording for Hyperion beckons?