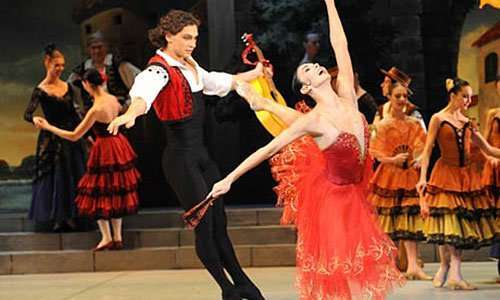 As London froze, still in the chill winds of a prolonged winter, all was Iberian warmth and sun, happiness and pleasure, during Mikhailovsky Ballet’s Don Quixote, perfect in Mikhail Messerer’s production. Leading the jollities, Natalia Osipova and Ivan Vasiliev, ballet’s power-star couple, exulting in seemingly impossible technical feats and whipping an already excited Coliseum into a veritable storm. What an antidote to the cold outside!

Messerer, scion of one of the most illustrious ballet dynasties and himself a teacher of world class, has made something of a speciality of creating historically aware and intelligent productions of, in many cases, old Soviet warhorse ballets. Laurencia follows this London season, and he will turn his hand to Vainonen’s The Flames of Paris this summer. Here, he returns to his Bolshoi roots with a superb production of Don Quixote (new to Saint Petersburg last summer) taking account of the onion-skin accretions that generations have added since Alexander Gorsky produced his version of Petipa’s ballet in Moscow in 1900. Don Quixote is Bolshoi through and through, and Messerer, despite producing now for a Saint Petersburg company, has wisely opted for the full Moscow monty when it comes to broad comedy and bravura dancing and acting. It is a hugely enjoyable triumph – Kevin O’Hare, Director of The Royal Ballet, who is commissioning Carlos Acosta to stage his version there this autumn must be praying that his version will have at least half the verve and virtuosity on show by the visitors.

The Mikhailovsky company clearly enjoys the whole affair, and throws itself heart and soul into it. Marat Shemiunov and Alexey Kuznetsov as Cervantes’s confused knight and his portly sidekick were admirable; it is hard to deliver broad comedy which is, well, funny! Ditto Pavel Maslennikov’s ditsy Gamache. Second Soloist Evgeny Deryabin’s tall, svelte spiv of a toreador Espada, was captivating, and he opted for charm and line. Kitri’s friends were the superbly matched Sabina Yapparova, Anna Kuligina, who held their own in terms of classical dancing, as in the Vision Scene did the corps de ballet and Ekaterina Borchenko and Veronica Ignatyeva, the former a long-limbed Queen of the Dryads, the latter a bouncy and chirpy Cupid.

Minkus’s music is here a perfect accompaniment to the unsubtleties on show, especially when played with such verve and speed by the company’s orchestra under Pavel Bubelnikov’s energised baton. Sets and costumes ravish the eye – the Russians are unafraid of painted flat scenery, and here, lit expertly by Alexander Kibitkin, each scene impressed.

The lead couple performed in a state of grace. They are supreme demi-caractère dancers, less suited for haughty princes and mournful princesses and more for ‘ordinary’ people. In Don Quixote, Kitri, the innkeeper’s daughter, and Basilio, an impoverished barber, fit them like gloves, and both relish their sunny playfulness inherent in the choreography. The roles allow them full vent to their extraordinary technical mastery which means spins and turns and jumps the like of which one rarely sees. Osipova spins like a centrifuge and leaps like a gazelle; Vasiliev hangs in the air in huge jumps. Both eat up space as they hurl themselves into the next spectacular move. It is prodigious and it is joyful. Perhaps at their finest in the Act One Market Square scene, Osipova and Vasiliev delivered a performance of true greatness: unsubtle, yes; flashy, yes; irresistible, undeniably.