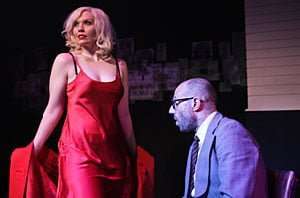 Edward Kleban is not a household name, although he has a place in the Broadway hall of fame as the lyricist for one of the most successful stage musicals, A Chorus Line (1974), his work earning him a Tony award and a share of the Pulitzer Prize. He wanted, though, to write both music and words for the theatre, and when he died twelve years later, he had accumulated over a thousand songs for various unrealised projects. His will requested that these numbers be used for a stage musical, and his long-time companion, Linda Kline, asked actor-writer Lonny Price to collaborate with her in fashioning a musical based on Kleban’s life, using twenty of the best songs from his catalogue.

Price played Kleban when A Class Act was staged in 2001, playing first at an off-Broadway theatre to excellent business and transferring to Broadway for a further two months, winning three Tony nominations, including Best Score. Two years later Robert McWhir produced and directed it at Clapham’s Landor Theatre, to considerable acclaim, and he now remounts it in a welcome revival. The show flows seamlessly, the characters have depth, and the songs never give the impression of being shoe-horned into the script. 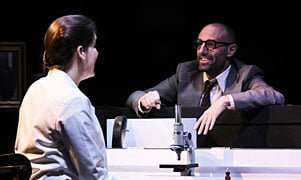 Kleban was a colourful character who was not the easiest person with whom to sustain a relationship. Manic, mercurial, demanding, energetic, arrogant, unforgiving, and with a history of mental problems and irrational phobias, he nevertheless inspired admiration and loyalty. He is a challenging character to bring to life. John Barr gives a sensational performance which embraces all the facets that made up this intriguing personality. Physically like Kleban – short, bearded and balding – Barr is already established as a fine singer, and it is hard to imagine the songs being better performed. He also interprets Robbie O’Reilly’s energetic choreography with aplomb, and conveys all the intriguing idiosyncrasies of Kleban in a performance worth a stack of awards.

He is supported by seven other lively talents, some of whom play several parts, including students Kleban met while teaching composing at the BMI (Broadcast Music Incorporated) Workshop, under the aegis of the famed show conductor Lehman Engel, to whom Barry Fantoni lends an appropriate air of exasperation as Kleban rebels against the instruction to write a “charm song”, arguing that show songs should have “motivation”. ‘Paris through a window’ is proof enough that Kleban was indeed capable of charm, although the old obstinacy surfaces years later when Marvin Hamlisch (believably enacted by Charlie Hagerty) wants the score of A Chorus Line to include a song able to stand independently as a hit-parade ballad. Kleban accedes and writes ‘What I did for love’, though it caused an irreparable rift between the two men. 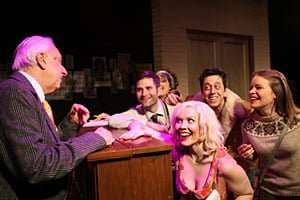 A Class Act neatly interpolates a section devoted to A Chorus Line, with some insights into its creation – Kleban has to labour to find the right adjective for the phrase “one singular sensation”. The multi-talented Gary Jordan convincingly portrays both an early friend and later the director-choreographer of A Chorus Line, Michael Bennett, who falsely promises Kleban that if he will agree to write just lyrics for the show, he will make his next production, Gallery, Ed’s pet project. Sarah Borges, as ‘the one that got away’, a one-time lover who chooses medicine over music, is poignant in her relationship with Kleban, and does justice to the gorgeous ballad, ‘The next best thing to love.’ (When he was working as a record producer under Goddard Lieberson, Barbra Streisand recorded one of Kleban’s songs, but ordered the number cut from the album – the song was never named, but could it have been this?)

Jane Quinn delightfully epitomises all the Broadway hopefuls who toil for years in the background – indicating a photograph of Angela Lansbury dancing the title number in Mame, she announces that if you look at the third girl on the left, “I’m behind her.” Alluring Laura McCulloch duets with Barr on two of the best numbers, ’Don’t do it again’ and ‘Better’, and Erin Cornell is winningly seductive in her solo, ‘Mona’. The company shines in the many ensemble pieces, and McWhir paces the show perfectly. The songs have excellent lyrics, while several contradict the view, often expressed to Kleban by his friends, that his lyrics were superior to his melodies – a criticism that Sondheim is accustomed to hearing. The lilting number, ‘I want to be in Gauguin’s shoes’ is a true showstopper, and ‘One more beautiful song’ has an enchanting melody. In the final number, ‘Self portrait’, Kleban sings “I’d love for you to know me well, to see me falling into place / To see the face behind the face behind the face.” He doubtless would have been delighted with this musical tribute, a true class act which provides a provocative and enthralling experience.