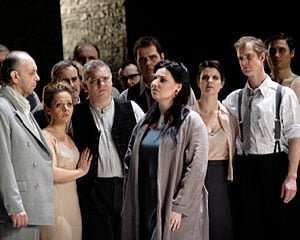 For all its video inserts and drab-chic designs, the most striking thing about this new staging of Nabucco is how dated it seems. Singers parade on, park themselves downstage and declaim to the fourth wall like a parody of the old school. They might as well have used music stands, so little does Daniele Abbado’s production, his second of Nabucco, pulse with theatrical life. Funds as well as faith have been invested in the Royal Opera’s co-production with Gran Teatre del Liceu, Lyric Opera of Chicago and La Scala, Milan (where it was unveiled last month), yet the average semi-staged Prom opera has more vibrancy than this. Stage skills, where not primitive, are hackneyed: individual characters spin on their heels to show anger/surprise/resolve and the ensemble has to express the mood of the moment by shoaling around like krill.

Nicola Luisotti’s conducting was at one with the direction: unyielding and only sporadically sensitive to the emotional world, limited though that is in this early Verdi opera (only the composer’s third). The ROH Orchestra – on fine form after an uncertain Overture, with some superb solo cello contributions – responded well to the maestro’s vigorous beat, and as a concert of Verdi set-pieces his account might have passed muster, but there was little attempt to explore the score’s dramatic possibilities. Thank goodness, then, for the superb Royal Opera Chorus, for this proves very much its show, the singers seizing their moments. From the opening chorus, ‘Gli arredi festivi’ to their triumphant final hymn, ‘Immenso Jeovha’, the choristers’ every thrilling onslaught flattened the listener to the rear wall. 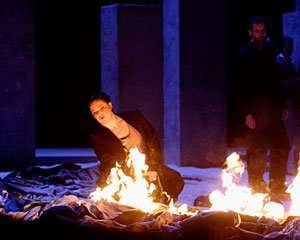 As Abigaille, the thwarted anti-heroine and thus the work’s most intriguing character, the Ukrainian dramatic soprano Liudmyla Monastyrska gave the Chorus a run for its money in the decibel stakes – though interpretational nuance was in short supply until her aria ‘Anch’io dischiuso un giorno’ in Part Two. More engaging on a musical level was Marianna Pizzolato as Nabucco’s true daughter, Fenena. The young tenor Andrea Carè made a notable Covent Garden début as Ismaele, the Hebrew king’s nephew, while the ageless Robert Lloyd was a knowing High Priest of Baal and Vitalij Kowaljow, another fine bass, an authoritative High Priest of the Hebrews. 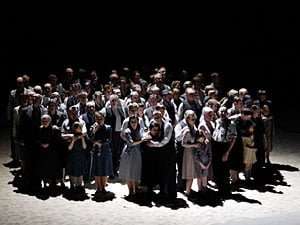 Nabucco himself is frequently referred to in the opera as an old man so it seems reasonable that Royal Opera has cast two septuagenarians to share the role. From April 15 Plácido Domingo will be adding the part to his growing baritone repertoire, but for the first five performances it is taken by the great Verdian Leo Nucci. If hints of wear and tear were apparent in his voice they suited the character and detracted nothing from what proved to be a magisterial interpretation.

Daniele Abbado (son of Claudio) has made little attempt to navigate a clear path through the drama so most of his ideas, such as they are, seemed muddled and half-baked. There was a fleeting suspicion that he may have been trying to evoke the Holocaust at some level, but that theory collapsed when a heap of apparently dead children stood up for a hug. In designer Alison Chitty’s monochrome landscape of standing stones, chicken-wire and sand the only slash of interest was a crescent of fire that distracted attention from Abigaille’s most important scene. As to who were the Babylonians and who the Hebrews, the drearily generic mid-twentieth-century costumes gave little clue. One or two tableaux had visual power, such as the huddle of the Hebrew Slaves as they sang (spellbindingly) ‘Va pensiero’, but most of the time on this first night the audience, singers and Verdi were left to fend for themselves.