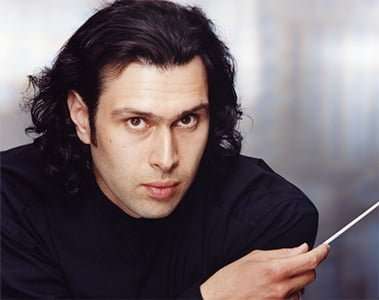 The Rest is Noise festival here reached the 1990s and a retrospective by the London Philharmonic Orchestra and Vladimir Jurowski of British music from that decade. Beforehand, in a free concert, the LPO’s Future Firsts ensemble (musicians on the cusp of a professional career) offered something complementary, its regular fifteen members, here fourteen, playing impressively under the lucid direction of Paul Hoskins (music director of the Rambert Dance Company).

They gave us three similar-length, 12-minute, pieces. Martin Butler’s Jazz Machines (1990) first of all had to contend with a miscreant noisily opening a plastic bag; despite scornful looks, the racket continued. Once passed such intrusion, Butler’s rapid-fire yet cool and pungent utterances (suggestive of the Modern Jazz Quartet) contrasted with more rhapsodic passages and made quite an impression in this outing. To Butler’s scoring of flute, bass clarinet, viola, cello, piano and xylophone, Judith Weir adds horn, trombone, oboe and double bass. The title of Musicians Wrestle Everywhere (1994) owes to Emily Dickinson. Weir’s invention is bright, pretty and airy, Sunday-morning urban, but eventually meanders to an inconclusive ending. The complexities of Julian Anderson’s Tiramisu (also 1994), a harp added to the above instruments, perked the ears up in this fine performance under the carefully plotting Hoskins that began with a violin solo from nowhere, gifted by the very assured Nilufar Alimaksumova. 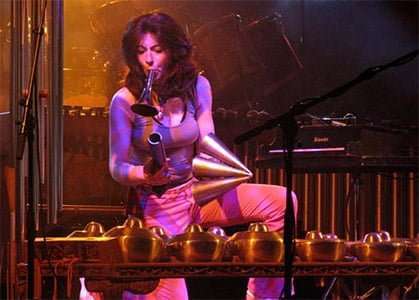 And so to the main concert, an excellent evening certainly, but one problem … too much percussion! Of course you expect nothing less from a concerto for this family of instruments, and James MacMillan’s Veni, Veni, Emmanuel (1992) delivers the goods (and opens with a bang) while sometimes obliterating some exhilarating things in the orchestra, the percussion seeming gratuitously laid on top. Take nothing away from Evelyn Glennie, though, the original soloist; she gave a super-confident display, her red-socked feet stalking the platform for instruments to strike, the LPO and Jurowski with her all the way. Although much of MacMillan’s rhythmic ingenuity lights up the sky, some of the slower music suffers from too many Pärt-isms and a structure that seems too haphazard. At the close of this plainchant-inspired piece, the orchestra members literally chime into the music while the soloist travels to a set of tubular bells for a clangourous, resonating and fading-to-silence envoi; it’s quite moving yet one also notes the contrivance; but perhaps a fitting end for a 30-minute piece that one continues to doubt despite its 400-plus performances to date.

The MacMillan was meant to come second in the concert, a place now occupied by The Stations of the Sun (1998), composed by Julian Anderson and based on the course of a year and folk-traditions therein. At 17 minutes, Stations is compact enough if not quite amongst Anderson’s strongest pieces, not adding up despite its activity, rapture and thrillingly cacophonous climax. At the either side of the interval, Mark-Anthony Turnage’s Evening Songs was perhaps, by its very title at least, able to dispense with instruments that are struck. With four percussionists employed, unfortunately not. (Surely a British piece from this era could have found that is scored for strings and winds, or either!) Over its three movements Evening Songs inhabits Turnage’s distinguishing neon-lit soundworld, bluesy saxophone in the mix, the music expressive and restless. The best of it comes centrally, the intensely moving ‘In the Half Light’, whereas elsewhere the material may be thought too indulged for its 18 minutes.

Finally Thomas Adès’s Asyla (1997), arguably the masterpiece of this concert, but seeming a little diluted here, most likely because there had been so much vibrancy and colour prior to it. Even so, Asyla emerged once again as fantastically inventive and quirky, the latter quality enhanced by such as steel drums and two upright pianos, one detuned, and a warehouse of other paraphernalia. Whether hallucinatory or apocalyptic – messages from a madhouse and sometimes with a Shostakovich-like loneliness – there is no doubting Adès’s consummate imagination and skill.

All of these ‘main concert’ works have been recorded, and the LPO has its own Turnage and Anderson releases, the former including Evening Songs, the latter without The Stations of the Sun, which can be found on the Ondine label conducted by Oliver Knussen. All in all, cross-cancelling elements aside, this was a splendid concert, the London Philharmonic giving us a programme of complex and characteristic music meticulously prepared and played with virtuosity and commitment.