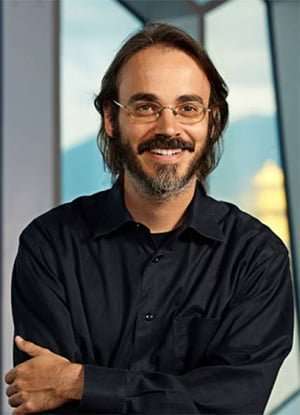 Wisps of sound, flecks of colour; such is the legacy of Toru Takemitsu (1930-96). He was here embraced in the Southbank Centre’s The Rest is Noise festival (Elliott Carter seems forgotten though) and made a big impression in these painstakingly prepared and classy performances from the BBC Scottish Symphony Orchestra (led by Laura Samuel, previously of the Belcea Quartet) and its former Principal Conductor Ilan Volkov.

Green (1967), almost a postscript to the much-longer November Steps original, has voluptuousness enough to be included in Messiaen’s Turangalîla. With plenty of incident and activity, leading to serenity, Green made for an ideal 6-minute entrée. The slightly longer Marginalia (1976), composed for the NHK Symphony Orchestra, also compelled the ear and the senses with its oriental timbres (the harp does a good impersonation of the Japanese biwa), stillness growing to something nocturnally nightmarish, supernatural elements and rich expression vying for attention. But three Takemitsu pieces back to back proved not such a good idea, for despite the composer’s economical fastidiousness, I Hear the Water Dreaming (1987) proved not only the longest work (12 minutes) but the least interesting in being similar-sounding to the first two pieces. Yet attractions included a languorous line, a refined palette of colour, and a shimmer out of which Adam Walker’s outstanding artistry was never in doubt.

At this point György Ligeti’s San Francisco Polyphony (1974) was brought forward from opening the concert’s second half. This kaleidoscopic and complex masterpiece, written for the American city’s symphony orchestra, Seiji Ozawa conducting the premiere (he is no stranger to Takemitsu’s music either), was given a lucid outing. Even at its most static the music has a febrile quality, extremes of register a hallmark – stratospheric and subterranean simultaneously – suspenseful and searing, all leading to the remarkable final section introduced by gossamer strings, a lightness that accumulates density until whipped into stopping. A great piece, brilliantly brought off.

After the interval, there was further fascination from Ligeti’s Violin Concerto (1993), which the composer (1923-2006) revised a couple of times into its final five-movement, 30-minute shape. The previous four works in this concert had all deployed a full orchestra, with discrimination and imagination. Ligeti’s Violin Concerto uses an ensemble of 27 musicians – eleven strings, seven woodwinds, four brass and five percussionists. It’s a discursive work full of tantalising timbres, of earthy dances and soulful lyricism, of conflicting tuning, sometimes folksy, chaotic (seemingly) and still. It’s a compelling and arresting work, frenzied and anarchic in effect, with a final-movement cadenza that is slithery and starlit, which Ilya Gringolts brought off with fantastic technique and unswerving musical commitment, as he did the whole work, the members of the BBCSSO totally secure with regards to pitching and interaction. And who could not be seduced by the haunting tones of recorders and ocarinas! Radio 3 recorded the concert for the Saturday-evening Hear and Now slot, part broadcast on 18 January with the rest on 8 February. Contractural issues aside, this programme would fit comfortably onto a BBC Music Magazine cover disc.