Dances at a Gathering
Music by Chopin

This final mixed bill from The Royal Ballet before the summer break is a must-see, containing as it does two utterly different works by two of the twentieth century’s greatest choreographers: Jerome Robbins and Frederick Ashton.

Dances at a Gathering has not been performed by The Royal Ballet since 1976. It has achieved legendary status within the company, and seasoned ballet-goers have been known to go misty-eyed at the thought of it, not least because of the toothsome first cast which Jerome Robbins himself chose for the ballet’s 1970 entry into the company repertoire: Rudolf Nureyev, Anthony Dowell, Antoinette Sibley and Lynn Seymour amongst others.

Robbins famously refused to allow The Royal to perform any of his works for the last ten years of his life, but in the decade since his death the company has slowly been re-acquiring ballets it used to perform. Dances at a Gathering is one such and, partly because of the mythical aura which surrounded it, partly because the work just needs it, nothing less than a superlative cast will do. Monica Mason has chosen her time right, and this revival is nothing short of superb.

Created by Robbins for his return to New York City Ballet in 1969 after nearly a decade of absence, it is a life-affirming piece: a conscious rejection of the dance works of alienation so much in vogue at the time and focussing on humanity, relationships and character. Robbins uses 18 pieces by Chopin (8 mazurkas, 5 waltzes, 3 études, 1 scherzo and 1 nocturne) in an order of his own devising to suggest a community of dancers exploring the many facets of human emotion: friendship, rivalry, melancholy, love, elation and friendship. There is no narrative, no story, but it is an evocation, a suggestion. It runs at just over an hour, which sounds a long time for dancing to solo piano music, but it is utterly entrancing, and from the opening solo for Brown, danced superbly and with great character by Johan Kobborg, happily returned to the stage after a long period of absence, to the final ensemble for all ten dancers, time literally flies by. 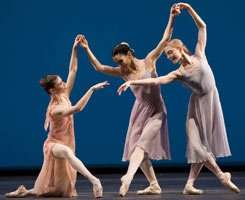 The Royal fields a superlative cast. Tamara Rojo brings her astonishing technique and acting prowess to Mauve, and passes from elation to dark-eyed melancholy with total ease. Alina Cojocaru (who was replaced at the evening performance in certain sections by Marianela Nuñez) was no less excellent, at her considerable best in the affecting, intimate pas de deux with Martin Harvey’s Purple. This was a couple in love, expressing it through dance. Harvey has never looked better: a fine dancer, he is more muscular and therefore ‘heavier’ looking than most men on stage, but he has been energised by this work, and seemed fleeter of foot and happy in the air. 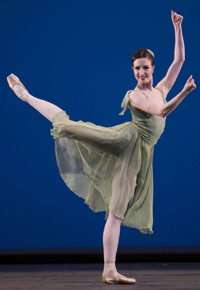 Federico Bonelli brought his customary unforced classicism to Green, to which he added personality and vim. I was most taken with Lauren Cuthbertson’s Green – the ‘girl who tries too hard’, projecting oodles of character and cheekiness, sexy and playful, technique razor-sharp. The very young Sergei Polunin, fresh out of the School, was chosen for Brick. He seemed utterly at home amongst the company’s finest principals and soloists, not least Laura Morera’s effervescent Apricot. He is a major talent in the making.

The work itself and the movement quality it requires are wholly American – it could not have been created anywhere else – but what is fascinating is that the atmosphere it evokes is not. We are definitely in the Old World – the gathering is essentially mittel-european, as Robbins shows not only by his choice of Chopin but choreographically through hops, heel clicks, heel stomps and hands on hips; indeed, the full panoply of folkloric signature movements from the region. Robbins himself, the all-American boy, was in reality always torn between his American present and his Russo-Jewish roots; Dances at a Gathering sees that conflict resolved, at least for an hour.

The two performances of Ashton’s 1964 masterpiece The Dream showed all too clearly how to preserve his legacy and how not. Ashton, as any great choreographer, needs the right dancers to dance his work; it is no good putting someone on in an Ashton work, no matter how technically impressive, nor indeed because they are at the rank of Principal, if all they seem to know about his style is what they appear to have printed off and read from Wikipedia. 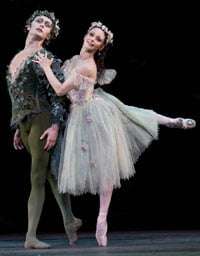 There are still dancers in The Royal Ballet who can dance Ashton, perhaps not as the roles’ originators (ever the cry of the aficionado) because technique and dancers progress, but who can still portray the essence of what he wanted, who can feel the music in their bones, and whose bodies move naturally in his particular style. Ivan Putrov and Roberta Marquez are admired by some for their interpretations of certain roles, but they should simply not be cast in narrative Ashton works.

Marquez is petite and fast, but that does not make her any more able than Amazonian ballerinas to portray the farouche Queen of the Fairies. She was utterly devoid of the interpretative qualities of the role. There was little interaction between her Titania and Putrov’s Oberon (and the ballet focuses on their quarrel and its resolution), little understanding of Ashton’s subtle musicality, no respect for the need to maintain beautiful line and merely a crude attempt at Ashton’s extravagant épaulement – which resulted more in burlesque than ballet. 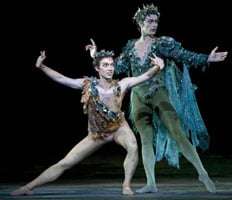 Leanne Benjamin has danced Titania for many years now, but the contrast with Marquez’s crudely sketched little fairy could not have been more marked. Not only was there respect for the choreographic demands, but Benjamin also established her Titania as Queen – imperious, capricious and definitely trouble; in her final acceptance of Oberon’s hand, there was the distinct impression given that while he had won that particular battle, the war was not yet over. Delicious.

Benjamin was helped immensely by having Edward Watson as her Oberon. This was a notable role debut for this fascinating dancer, and, characteristically, he made it his own, clearly portraying his capricious anger and revenge. His mime was crystal-clear, sadly contrasting with Putrov’s inconsequential flapping, which did nothing to further our understanding of what was going on and which can only have added grist to the mill of those who claim mime has no function in classical dance. Indeed, Putrov seemed incapable of portraying his character at all: at times he looked somewhat bemused, and at others terrified of what is an exceptionally demanding role. Technically, he is a more proficient dancer than Watson, but he approached the scherzo nervously, unable to unleash the dizzying spins and enchaînements that Ashton created for the young Dowell, which tax and defeat many over 40 years after.

Watson however launched himself wholeheartedly into the role, with the result that while not textbook perfect, his pyrotechnics were genuinely exciting and he managed to pace himself well so that the glorious pas de deux (set to the Nocturne) was a measured and beautifully partnered climax to the ballet. In it both he and Benjamin observed the myriad of little touches which make this one of the greatest duets in the repertoire – hand gestures, movement dynamic, shared musicality, épaulement, respect for line and symmetry. Alas, Putrov was clearly exhausted by the time he staggered to the same point, and partnered Marquez crudely.

It is astonishing that such a difference can exist; it comes from misguided casting, and is all the more inexcusable because there are Ashton dancers in the company who could dance the roles and yet who have been passed over in favour of those who cannot. (This same phenomenon affected the recent revival of Ashton’s A Month in the Country and it is time that it is stopped. As in any artistic discipline, those that are most suited to a certain style should perform it: it would be wrong to accord a role in a bel canto opera to a verismo singer and then to ask people to pay to hear it…)

The ballet overall has been well-revived though, with accurate and musical fairies and two quartets of mortal lovers who were genuinely funny without overplaying their parts, which has always been a danger. Puck is a difficult role and requires the right mix of cheekiness and style; I felt Michael Stojko got it just about right in the evening performance, unleashing his aerial acrobatics with ease and charm and projecting insouciant mischief. Ludovic Ondiviela did not impress so much, his mime and movements too unfocussed to make the desired effect but alas, disaster stuck him down he clearly injured himself quite seriously as he was dancing and he crawled off stage in clear agony (we could hear his cries in the wings); we can only hope and pray for his speedy recovery. James Wilkie, a dancer who happened to be back-stage, was quickly put into a spare Puck costume and the show went on – he most certainly deserved his cheer at the end.

Go to this double bill: Dances at a Gathering needs to be seen (it is revived next season also), but check the casting for The Dream…