Symphonic Variations – ballet in one Act to choreography by Frederick Ashton 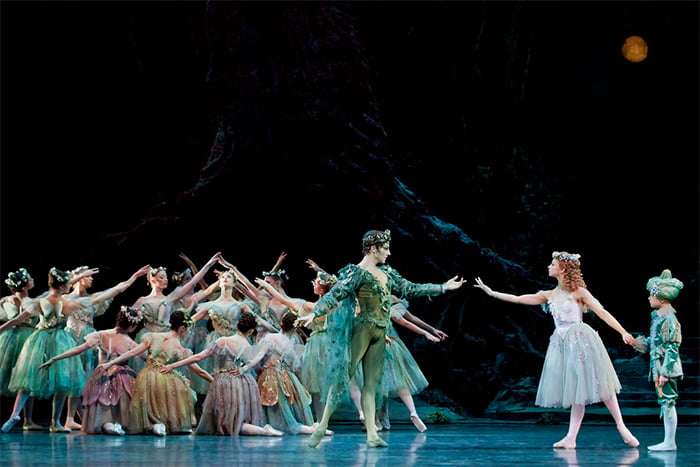 After seeing The Royal Ballet’s final Mixed Bill of the season devoted to the company’s Founder Choreographer, it is hard not to conclude that Frederick Ashton’s genius lay in large part to his talent for refinement. Where lesser dance creators tend towards the overblown, overlong and over-conceptualised, Ashton shows, through these three very different works, that he pared away, shortened, extracted until he arrived at the essence of his art. Thus, Shakespeare’s A Midsummer Night’s Dream goes through the process to emerge as The Dream, a brilliant 55-minute danced synthesis of the tale; Ashton’s readings of the mystical writings of St Teresa of Avila and St John of the Cross and the portrayal of an allegory of the awakening of spring are subsumed into the blissful, abstract serenity of Symphonic Variations, and Dumas’s La Dame aux Camélias becomes the series of perfectly-sketched narrative vignettes that comprise Marguerite and Armand.

This triple bill comes at the end of a decidedly bumpy season which, if it has seen the emergence of impressive talent in all ranks, has also suffered from shaky programming and a lack of focus in certain areas of the repertoire. This Ashton programme is welcome, therefore, on many levels. It proves that The Royal Ballet, Ashton’s home ensemble, can still perform his works in a way that serves as an example to the rest of the world, that it continues to recognise the choreographer’s continuing place in its dance and aesthetic tradition, and that it possesses dancers of the necessary quality to do these works full justice. 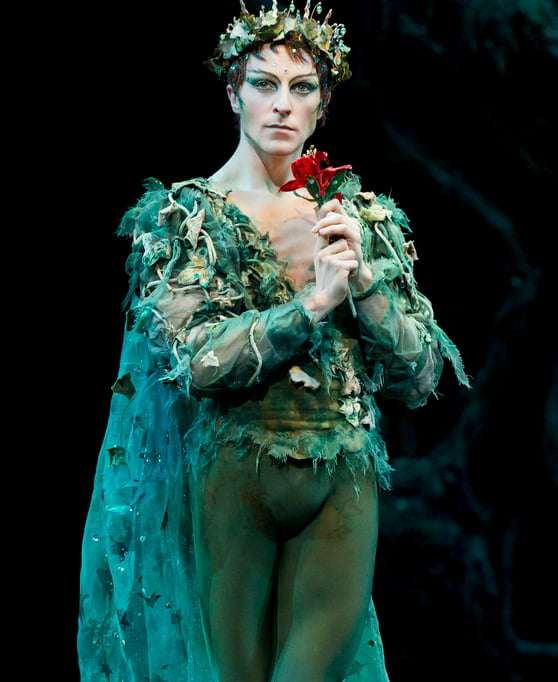 The Dream is regularly revived, but there have been few revivals in recent times that have been characterised by such fresh quality. Sets, costumes and lighting have been given careful attention, so that the setting by David Walker is truly magical, a Victorian faerie forest clearing in which the supernatural and the mortal come together. This was matched by the pit in which Emmanuel Plasson coaxed delicate playing from the orchestra and alert singing from the children’s choir. So to the dancing. There can have been few Oberons since Anthony Dowell, the role’s creator, who have been in such command of its demanding choreography as Steven McRae who seems positively to relish its myriad challenges; the highlight was his mercurial dancing during the punishing Scherzo, spinning with dizzying speed, changes of direction effected in a split-second while maintaining elegance and pliancy in the upper body. McRae has deepened his interpretation of the King of the Fairies and is now a wholly confident monarch, easily ruling over his sylvan domain, gestures emphatic, regal, his bearing noble.

Replacing the injured Sarah Lamb, Akane Takada took on his queen Titania for the first time in a notable assumption. Promoted to Principal rank at the beginning of the season, she has already shown a deep and assured classicism (making her a particularly pure Aurora in dance terms) and an affinity to Ashton’s neo-classical, more character-driven, characters such as the Young Girl in The Two Pigeons. Her Titania is, above all, a sensual creature – her clear attraction to Bennet Gartside’s loveable Bottom was unmistakeable and her yielding to Oberon during the famous Nocturne pas de deux total. She is musical and allies the Ashtonian virtues of strong, precise foot and legwork with a melting torso and soft, eloquent arms – she and McRae make for a fine couple.

Valentino Zucchetti as Puck brims with elfin exuberance and requisite speed, while the quartet of human lovers nailed the timing of their comic business to perfection, eliciting natural and spontaneous laughter – Itziar Mendizabal showed quite how good a comic actress she is through expressions and gestures which registered throughout the entire house. Essential to a successful Dream is a fleet-footed corps of fairies who must dart and skitter, and it is good to report that, despite the demands of a mainly contemporary season, the ladies of the ensemble, danced fully within the Ashtonian idiom. 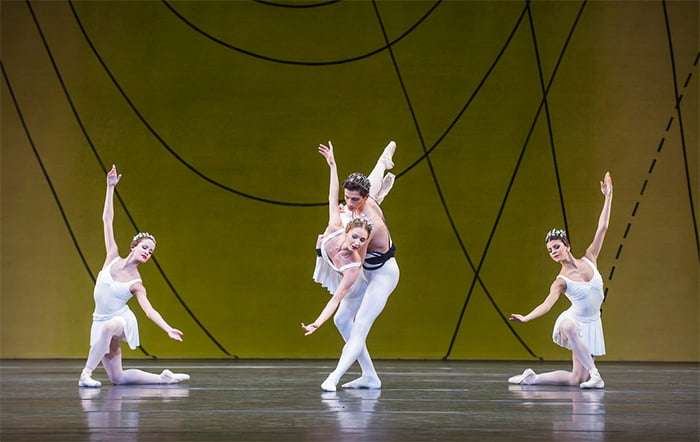 Symphonic Variations stands as one of Ashton’s greatest works, famously his ‘blueprint’ for English ballet, premiered in 1946 at the newly-opened Royal Opera House. Sophie Fedorovitch’s abstract green-hued designs and Ashton’s choreography were conceived for this very stage, and the effect of the curtain rising at the outset to reveal the six, immobile, white-clad dancers does not fail to impress, over seventy years on. What followed on this occasion was a performance of true distinction, the dancers showing evident enjoyment whereas in previous revivals they have seemed terrified by a work which not only carries such significance for the company but also presents a feat of endurance during its twenty minutes, during which none leaves the stage.

Serenity lies at the heart of this great ballet, a calm stillness and a purity – not a gesture, not a step is superfluous, none without import to the whole. The six understood this, bringing the quality of smooth lyricism to their movements and evident care with the balance and harmony in their spacing as Ashton sets them about the stage. Marianela Nuñez took Fonteyn’s central role, and tempered her natural exuberance in a performance of dignity and proportion, matched by Vadim Muntagirov, partnering with gentlemanly good manners and bringing absolute purity to his leaps and turns. But this is an ensemble work, six dancers always moving with, or in response or counterpoint to, each other – they have been described as ‘celestial bodies’ in the past – and this cast achieved the sense of togetherness so vital to the concept; some of the most touching moments in this ostensibly abstract work are when all six join hands and circle around the stage. Musicality, as in every Ashton ballet, is all, and the intense relationship between Franck’s composition and his choreography stands at the work’s heart – it is its visualisation. These six dancers succeeded in dancing within, rather than to, the music, and it lived. 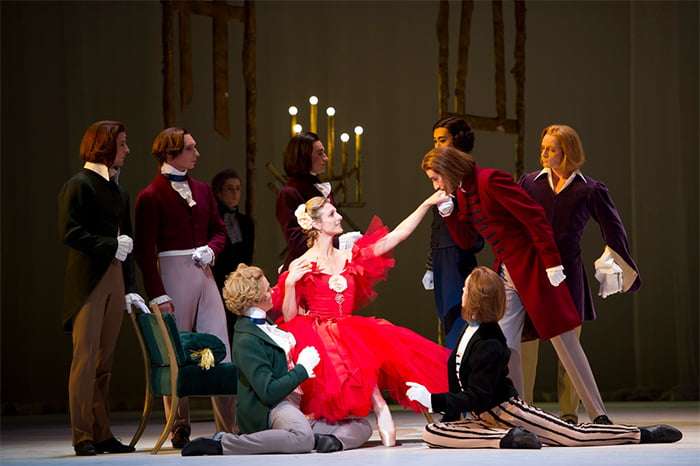 Marguerite and Armand, for many years the preserve solely of Fonteyn and Nureyev, the ballet’s creators, is now part of the modern repertoire, often serving as a vehicle to two star dancers. Ashton’s clever concentration of the Traviata story may seem to need that star quality, and The Royal Ballet has assembled three high-profile casts for this revival, but that may not be the case.

Zenaida Yanowsky, much-loved and long-standing Principal, portrays the doomed courtesan for her farewell performances as a permanent member of the company, and it proves a superb choice. Yanowsky, who has not always been cast as often or seen as much as her many admirers would have wished, is an intense actress (her Natalia Petrovna in A Month in the Country remains one of her great achievements) and she brings both talent and experience to the role of Marguerite, creating a fully-developed character, and nuance and subtlety to her portrayal. She uses her eyes superbly, emotions registering with the entire audience, and judges her movement quality with evident care – her broken body and failing forces are almost painful to see in the ballet’s closing scene. We salute Yanowsky and give thanks for the many years of her artistry which she has put at the service of this great ensemble.

Roberto Bolle, star Italian dancer, seems to defy the passing of time, looking as youthful as he did twenty years ago. He has partnered Yanowsky frequently in the past, so their pairing for her farewell performances is entirely logical, but he is no actor, nor does he blaze with intensity, as Nureyev undeniably did. His Armand is somewhat blank at first, a pretty boy dancing well enough, but little more; as the work progressed Bolle became more engaged, and the final pas de deux was genuinely touching, even if the impression was that his emoting remained on a somewhat generic level. It is a pity that, having found a tall partner for Yanowsky in Reece Clarke (she is uncommonly tall for this company), and seeing their spring-autumn pairing work so well in Wheeldon’s After the Rain pas de deux, The Royal Ballet did not cast this young man as Armand. But this remains a minor caveat in what is a superb and fitting final performance by Yanowsky, strongly supported by the other members of the cast – Christopher Saunders found tenderness in the role of Armand’s father and Gary Avis made much of the Duke, Marguerite’s ‘protector’.

Frederick Ashton’s ballets stand at the very heart of The Royal Ballet – his movement style, his approach to narrative and his musicality suffuse the company’s particular take on Classical dance. This triple bill comes as a source of immense relief to those who have felt that the ensemble has been losing sight of that fact – The Royal Ballet from its Director through to its dancers do their Founder Choreographer proud and also show that he was the creator of dance works of the very highest quality.