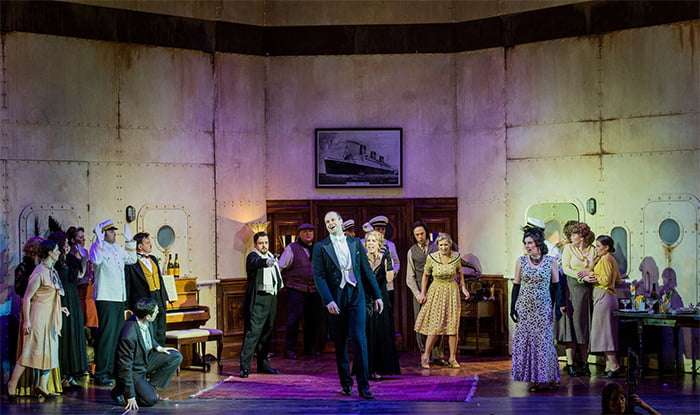 The slightly rusting deck of an ocean liner arrayed with cabin doors and life-rings is certainly not what one expects as a setting for Don Giovanni, and as the crew and passengers arrived during the Overture, dressed in 1930s’ attire, one wondered how this drama was going to play out on the high seas! As various characters boarded one started looking for a diminutive moustached Belgian detective ready to identify the murderer at the end.

This is an innovative and well-thought-out concept, delivered well in terms of the more tricky parts of this opera to stage convincingly, most notably the end of the first Act, and the changes of cloaks at the start of the second. The emphasis is geared to the opera as a Dramma giocoso. Dane Lam leads a very fleet account of the score, full of light and shade, with a beguiling propulsive quality about it; and there were many moments where the transitions between the orchestra and Stuart Wild’s admirable continuo (on piano) were seamless. The arrival of Zerlina and Masetto and their friends had a very jolly lilt to it and instrumentalists were given their moment to shine. The more-dramatic episodes also got their full due. For the most part Lam was singer-friendly too – indeed the only time where the pace felt forced was in Don Ottavio’s ‘Il mio tesoro’.

However, it is a shame that the final scene was so truncated musically, and that we lost the complete ‘afterthoughts’ of the characters after Giovanni had met his watery (not fiery) end.

Neil Irish’s designs are triumph from a musical and acoustic perspective as the flat walls positioned close to the front of the stage have the effect of bouncing the vocal sounds straight back at the audience, lending the singing great immediacy. It is also clever in the way that the central sections open out to give more space, but not too much, for the crowd scenes. Lighting and projections are simple yet effective. 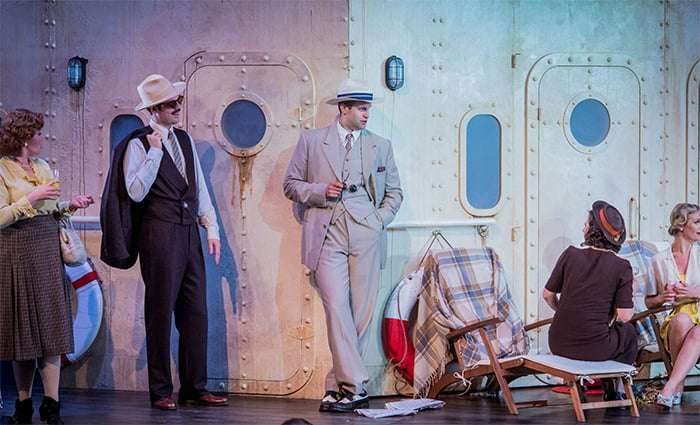 Oliver Platt’s direction is both inventive and cogent. There are moments of great humour, at the expense of the surtitles, such as Zerlina hiding behind the foliage of the celery in her cocktail glass. Particularly telling was the moment where Don Giovanni and Leporello change clothes in full view; when Donna Elivra encountered Leporello as the Don she was reassured by the appearance and smell of the clothes, thus missing the identity of the man behind the mask. Brilliant! Donna Elvira’s maid is present with her mistress from embarkation, another clever touch. The choreography at the end of the first Act was winning too – the confined space making Giovanni’s attempted abduction of Zerlina and his later escape from his pursuers dramatically plausible.

Ashley Riches and John Savournin are well-paired as Giovanni and Leporello, credible in their interplay and in their co-dependence. Vocally they are not so well differentiated – there is surely some humour to be had in vocal contrast. Riches has a likeable arrogance to him, and his singing is virile, expressive and very suave. Savournin is the more serious and saturnine characterisation; vocally very assured also. From her first appearance as Donna Anna, Lauren Fagan demonstrated a rich, creamy and dramatic voice that bought immediacy and thrill to her every utterance. She uses words and a palette of vocal colours to thrilling effect; this is a voice of amazing potential.

Victoria Simmonds as Donna Elvira took a little longer to get into her stride – it’s a fiendishly difficult part vocally – but by ‘Mi tradi’ was on top form. Dramatically she is the lynchpin of Platt’s concept, making the character more sympathetic than usual yet maintaining the essential neurotic quality. Ellie Laugharne’s Zerlina is likeable vocally – but it’s a reading too knowing for this character. This perhaps gave Ian Beadle, as Masetto, less opportunity to flex his vocal and dramatic muscles as Zerlina’s headstrong and jealous lover. Graeme Broadbent thundered most impressively as the Commendatore, and Ben Johnson was a generally comforting presence as Don Ottavio, his lyrical and flexible voice being shown to best effect in his first aria. Good singing from the OHP Chorus, too.

All in all a rewarding and sometimes challenging evening of theatre and music, certainly worth seeing and hearing!