There are very few choreographers, if truth be told, who can stand up to the scrutiny of a full evening of their works; they are just too samey, their talent too modest for the audience not to get bored with them. It is, therefore, perhaps a measure of achievement for such an evening to be successful. The late Kenneth MacMillan, Royal Ballet home boy, was a choreographer who undoubtedly deserves and sustains such a programme: from his first professional work, Danses Concertantes (1955) to his last, The Judas Tree (1992), he produced ballets which have become staples of the repertoire, not least Manon and the omnipresent Romeo and Juliet.

It is in his one act works, though, that I feel his true genius lies, and it is a difficult task indeed for any director to choose just three to put in a bill such as the present one. In many ways, having seen the sheer eclecticism of his work in this programme, it makes one wish for others which have not seen the light of day for many a year; it makes one yearn not for another interminable run of said Romeo and Juliet (as the company has promised us next season) but instead a couple of triple bills of these works: The Invitation, Gloria, Danses Concertantes (which, given The Judas tree is in this programme, should really have opened it), Valley of Shadows, Symphony etc.

But in today’s climate of dominance by the more box office-friendly full-length ballets, we should be grateful for what we get. This triple bill proved more enjoyable than it promised to be on paper, the works not in themselves being the ideal combination, but rather their sheer difference underlining MacMillan’s great talent. 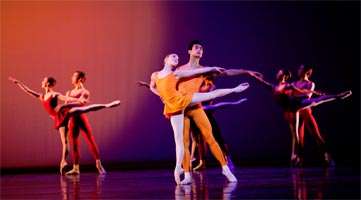 Concerto was created in 1966 in Berlin for the company of the Deutsche Oper whose director MacMillan had become when, frustrated by the lack of openings at the Royal, (Frederick Ashton, choreographer extraordinaire, was at the helm) he flew off to Germany, taking some rather nifty Royal dancers with him. There he found a rather less well-drilled company than he had become used to, and used this work to instil common musicality and style. Using Shostakovich’s Piano Concerto No. 2 (clear, danceable rhythms), he created a delightful work at the heart of which is the superb slow movement pas de deux.

In the jaunty first movement, Laura Morera excelled, bringing her acute musicality and technical strength to this quicksilver part. I was glad that reports of a dirge-like tempo on first night were not repeated and the whole movement skipped by in a trice. Brian Maloney is less musically sophisticated, but his is a clean technique – I just wish he didn’t always seem to be at the limit of his ability; he is clearly a strong dancer, but always worries me that he will fluff the next step (as some actors always seem on the verge of forgetting their lines), even though he invariably doesn’t.

Alas, if there is a weakness in the company at present, it is at lower, soloist level, where the quality is uneven, the style far from uniform, as evidenced in an uneven supporting sextet and the corps de ballet, each member of which seemed to have her own idea about where her arms had to be at any given moment. This is simply not good enough in a company the rank of The Royal, and especially in a work designed specifically to ensure uniformity.

The central pas de deux was performed to near-perfection by the thistledown Sarah Lamb, radiant, supple and with exquisite line, and the highly promising and rock solid Ryoichi Hirano. I cannot praise this pas de deux too highly, it being one of the most enchanting and mesmerising of the repertoire; there is no higher praise than to say that the dancers did it proud.

More problematic was the third movement in which I shall say no more than that the lead soloist was miscast. The corps de ballet seemed more together than before and the ballet ended on its cheery, upbeat note. Jonathan Higgins acquitted himself well as piano soloist although I would have relished more spike to Dominic Grier’s otherwise clear conducting. 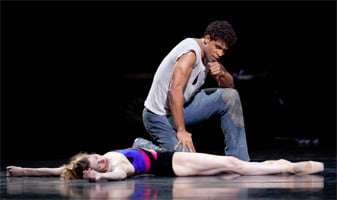 The Judas Tree, MacMillan’s last ballet, is a dark, brooding work, in which the choreographer returns to his world of psychosis and dysfunction, here set on a building site in London’s Docklands (in Jock McFadyen’s evocative setting). Created for the hulking, older presence of Irek Mukhamedov as The Foreman, in revival the emphasis shifts, no dancer able to summon up his sheer stage presence and the explosive quality of his complicated jumps. That is no matter; for a work to live, it must work on other bodies and temperaments than those of its creators.

Thiago Soares is no Mukhamedov in silhouette, but he makes the Foreman a more vulnerable creature and brings something of the Latino slum boy to the part, with more than a whiff of West Side Story. He was superb, hurling himself into the demanding choreography but, as importantly, transmitting the idea of a man morally bankrupt, a seething pot of conflicting emotions. This shift away from the Foreman brings his two friends more into the spotlight, especially the role of the ‘Christ’ figure, here astonishingly well portrayed by Johannes Stepanek, a highly dependable soloist who in the last eighteen months has moved up a gear and caught fire artistically. Equally impressive Sergei Polunin, the company wonder boy, who here sublimates his A1 classical technique and works hard at characterisation and looking tough.

We are in a typically MacMillanesque closed world – a building site – into which The Woman is introduced. The narrative is not linear (she is ‘murdered’ and ‘resurrected’ twice), hence the four blood-red moons in the sky over Canary Wharf, and she is a mixture of the literal (the Foreman’s girlfriend) and the symbolic (both Mary and the Magdalene). She dominates the men and is in turn dominated by them (in a brutal rape scene, tossed from man to man in a sick reinvention of MacMillan’s own brothel seduction scene in his Manon). Mara Galeazzi was quite superb in the role, effortlessly passing from seductive slut to brutalised victim. This is perhaps not a work one can ever love, but it is most certainly possible to admire it, all the more so when given such a superlative performance. Brian Elias’s score for this work continues to be one of the most successful written for the dance in recent times. 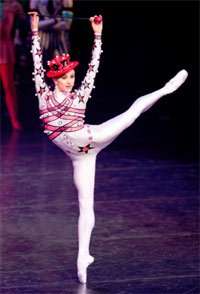 Elite Syncopations (1974) was intended, in the spirit of the age, to cock a snook at the ballet establishment, and succeeded in its aim to provoke words of outrage that the superlative thoroughbreds of the company’s best classical dancers should not be dressed up as fairground ponies and made to mock the very art form of which they were such noted exponents. Luckily, such attitudes are long gone, and so is the iconoclastic impulse of those times. So what remains could fall decidedly flat. That it doesn’t indicates that beneath Ian Spurling’s eye-wateringly loud and ‘mad’ costuming, the comic posturing and the lightweight ragtime music of Joplin et al there remains an highly enjoyable half hour of dance. Yes, the frisson remains at seeing the company let its hair down; but the choreographic invention is so delicious, so off the wall, that we sit back, smile and laugh.

Highlights in this highly successful revival were Laura Morera in a perfectly judged Calliope Rag (a part created on the company’s present director, Dame Monica Mason), all wiggling bottom and seductive arms, the diminutive Michael Stojko and the towering Natalia Harrison in The Alaskan Rag, nailing every sight gag (how I wish to see him as the husband in Jerome Robbins’s The Concert) and Thiago Soares’s deadpan, not-a-hair-out-of-place, Latino dance-floor love god as Marianela Nuñez’s partner (how I wish to see him as The Dago in Ashton’s Façade). Yes, there were some performances a little below par, and I would urge the dancers when not dancing to react to and interact even more with those who are (they all sit around on chairs bordering the ‘dance floor’). All praise to Robert Clark and his zanily-clad onstage band for delivering the music with such panache.

In all then, an evening to highlight MacMillan’s astonishing versatility – however, one triple bill cannot do him justice, and I can only join the clamour to see more of his one-act works.