The Orchestra of The Royal Opera House
Martin Yates 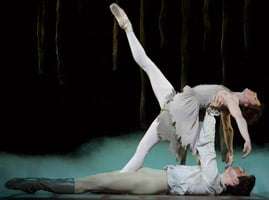 A tale of three Manons – one with as experienced a principal pairing as one could hope for, the others with a debut in each. What emerges from all three is the quality of the revival.

Kenneth MacMillan’s 1974 take on Abbé Prévost’s story has now established itself as a staple of The Royal Ballet’s repertoire, and is number one choice for other companies to acquire. It is a cleverly woven ballet, beautifully judged with few if any of the longueurs that can afflict MacMillan’s full-length works. It has a wonderfully lush score, a pot-pourri of toothsome Massenet plucked from seemingly everything except his own opera “Manon”. It was a pity that Martin Yates decided to drain much of the impetus with his painfully slow speeds which also compromised the dancing at times – unforgivable from a conductor in the pit at a ballet. He did not, I noticed, look much at the stage – not exactly the best of ways to synchronise with and react to the action. 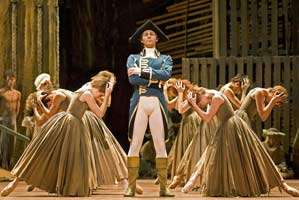 But on to the dancing. This is a delightful revival: sets and costumes look freshened up, lighting brighter, and the dancers all in character and style – much has been done with the corps de ballet, who swoop and bend as they used to and which is ultimately required by the choreography. Character parts are well taken, notably William Tuckett’s Monsieur GM, a study in sadistic, debauched cruelty if ever there was one, while Christopher Saunders was somewhat more benign. Both Gaolers were menacing and violent in their ravishing of the exhausted and defenceless Manon in the third act. Lauren Cuthbertson debuted as Lescaut’s mistress, and at both performances delivered a fine account of the role (created by the present company director Dame Monica Mason), but the detail of her delivery did not project, and she was outshone by Isabel McMeekan’s performance which was more sultry and technically assured. 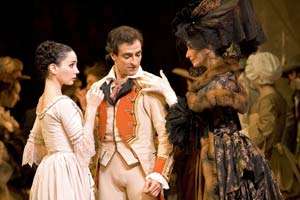 But this ballet stands or falls on the three main characters. Lascaux, Manon’s wheeler-dealer pimp of a brother opens the ballet, and has some of the best moments: all three whom I saw were good, but Viacheslav Samodurov danced him in too classical a fashion – MacMillan fused ballet technique with much naturalism – although he judged the Act II drunken pas de deux well, eliciting the biggest laughs of the three. Thiago Soares should be an ideal Lescaut, but he paints with too broad a brush-stroke and seems ill-at-ease with the choreography, often hurried and imprecise in its execution – he just doesn’t move fast enough for Lescaut’s triumphal manège in the bedroom in Act I. Far superior to both these principals is First Soloist Ricardo Cervera, whose bubbling stage personality is channelled into a cocky, arrogant good-time boy of a Lescaut, nimble of thought and step, master of the choreography and thought through in interpretation – his joyous happy drunk of a Lescaut in the brothel made one smile. He alone caught the nuances of the character and nailed the technical challenges of the role. 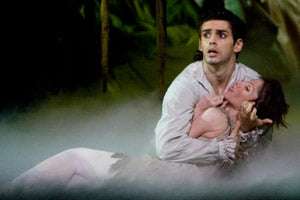 Des Grieux is a difficult part, combining technical challenges, complicated partnering and a good deal of acting. All three were of a high standard although it would be unfair to judge Bonelli, as he was clearly having an off night, which he fought to counter and finally did so in the last act. He acts well, and was wonderfully impassioned at the sight of Manon in the brothel scene, however, his acting stops when his dancing starts instead of informing his movement. A pity as the line is classically pure and the interpretation is fine, but a present they do not happen simultaneously.

Edward Watson secured a notable debut with a deeply innocent Des Grieux, at first bemused by the attentions of the courtesans in the first scene and not quite believing that we was falling in love. His despair in the final scenes was palpable, helped, no doubt by his experience of dancing Rudolf in MacMillan’s Mayerling. Watson’s impossibly long legs have never been seen to better effect than in the characters knee breeches costume and the sublime choreography that MacMillan created for Anthony Dowell allowed his line and careful use of arms and hands to good effect. His silent scream at the final moments of the ballet sent shivers down the spine. 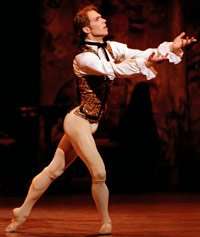 Most accomplished was Johan Kobborg, unsurprising because he is a dance-actor unrivalled in the company, and perhaps in the world today. His was a deeply introspective Des Grieux, almost oblivious to the world around him, his best friend the book he is reading. His descent into love and obsession was painful to watch and the highlight was his desperation during his pleading to Manon n the brothel scene and his subsequent solo in the brothel. Kobborg was on superb technical form, with every turn successful and every placement correct. This was as fine a performance of this role as one is likely to see.

He was dancing with the wondrous Leanne Benjamin who brought her wealth of experience to match his. She does not dance with him much (he is usually paired with the presently injured Alina Cojocaru) but it was plain from this combination that they should dance more together; she was every bit his match, with the result that their dancing and abandon were breathtaking. Benjamin plays a cool Manon, less the innocent at the beginning, and highly arch in the brothel scene, her high point after which everything turns very much for the worse. Mara Galeazzi was much more a ‘stock’ Manon, although she and Watson made much of the final act, and their final pas de deux and her death was moving.

Laura Morera made a blazing debut in the title role; she has thought hard about the character, and while she could tone down the winsome quality of the first scene, it was clearly to show a young innocent suddenly finding herself in love, or at least in lust. Only with Monsieur GM’s gifts to her in scene two does she show that she understands her power over men, and the benefits she could reap from sing it. Here she made a wonderful sister to Cervera’s Lescaut, the two dancers having the same fleet quality of movement and innate musicality. If the brothel scene was not as powerful as it could be, much blame could be laid on the shoddy partnering she had to endure from the various men she is passed around between. Her final act was startling: I have never seen a Manon so broken and exhausted as she from the outset – staring eyes and physical weakness – it made for a particularly brutal rape by the Gaoler, and a deeply moving final death scene. A wonderful portrayal which can only deepen as she dances the role more often.