Within the Golden Hour 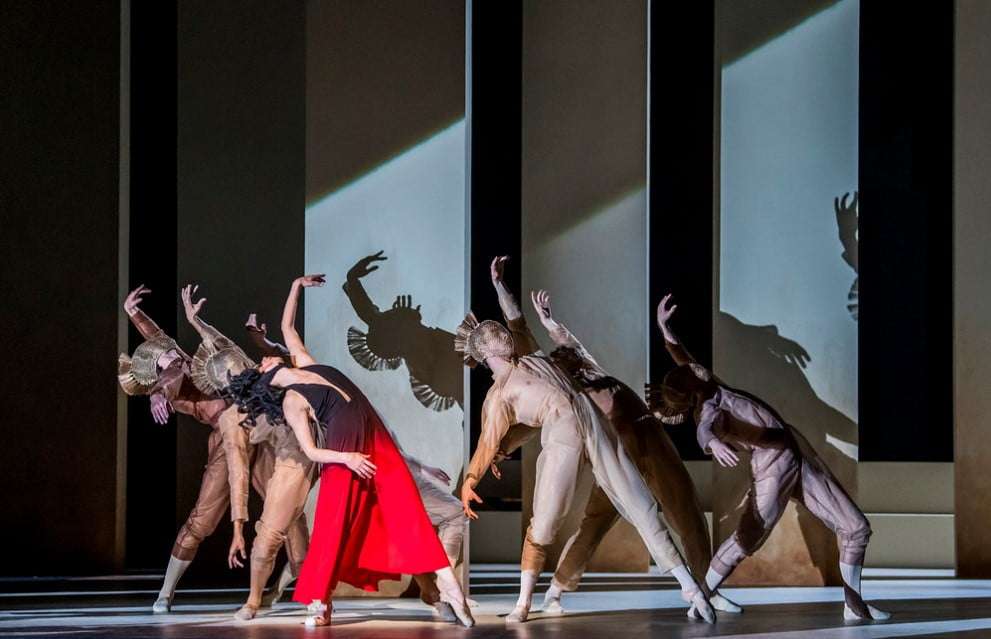 There is nothing wrong with the new in dance; indeed, it is its very lifeblood, otherwise classical ensembles, such as The Royal Ballet, become museums, the dancers today’s curators of the ballets of the past. However, for a company like the Covent Garden ensemble, there is a balance to be made, and judicious decisions to be taken, about what should join its rich performing repertoire and why. The latest offering from The Royal Ballet shows how it can go wrong, and the fault lies in the planning stage and, crucially, the combination of music used. There must be serious questions asked why Ezio Bosso’s pleasant if soporific arrangement of low-key Vivaldi should be heard in the same evening as Henryk Górecki’s dark, slow Symphony No.3. Add then to the mix Sidi Larbi Cherkaoui’s choice of lugubrious Purcell and some atmospheric if unexciting electronic sounds and you end up with an evening of quite unusual aural dullness – musical valium. Not that the dancing much helped either until the last 35 minutes of this near three-hour programme (over an hour of interval presumably to give the audience something to cheer them up).

The pre-premiere puff about Medusa, Cherkaoui’s balletic debut at the Royal Opera House, has been considerable, given added weight by Natalia Osipova creating the title role. The whole affair has been designed to within an inch of its life and it all looks as slick as any pop star’s spectacular – Cherkaoui has worked with Beyoncé among others – but as a ballet it is incoherent and choreographically empty. The choreographer has chosen the myth of Medusa, but what has been passed down to us has not been deemed fit for purpose: exit turning people to stone, exit the use of Medusa’s reflection in a shield, the slicing off of her head and exit Pegasus springing from her neck; enter a love story between Medusa and Perseus, and enter Medusa, head restored, frolicking in what looks like an ashram for eternity. The story has been mangled into something unrecognisable, which makes one ask why choose this particular narrative in the first place. 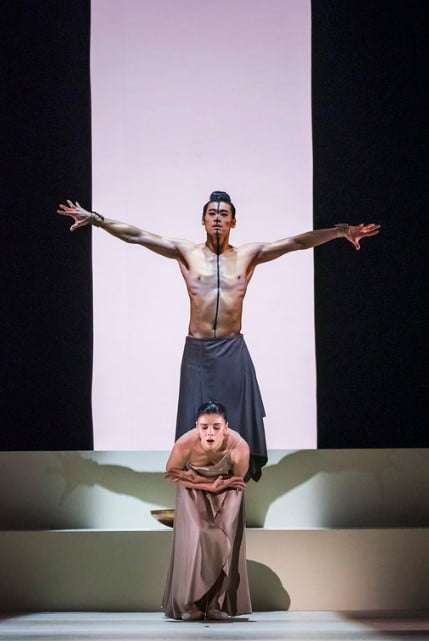 Ballet has always turned to Classical myth as a source of inspiration, from Apollo to Persephone, Icarus to Orpheus, but not all legends make for good dance works. The production looks handsome, with a plain set which fills with rectangular columns for Medusa’s lair. Costumes are decidedly mixed, from the pleasing, flowing silkiness of the priestesses of Athena to the most successful of all, Athena and Poseidon, the former glamorous Olivia Cowley in striking wig and make-up, the latter Ryoichi Hirano bare-chested, in a dark skirt with a striking single line bisecting his body and face from navel to forehead and down his neck and back. Of quite extraordinary ugliness, the outfits that the poor men of the company are forced to don as Perseus and his soldiers – they are in what look like oatmeal boiler suits (in fact gauzy, well, oatmeal boiler suits, over white body stockings which mask knee pads) topped with Grecian helmets which cover the entire face in a mesh. Not only do they look quite ridiculous, but it reduces them to mere bodies to be moved about. Additionally, to choreograph movement for classical dancers from which they must be physically protected raises serious questions – goodness knows the majority of dancers suffer terribly in later life from joint failure.

Pity poor Osipova, who dons a fright wig to indicate she has been turned into a monster by a vengeful Athena – it is an unintentionally hilarious moment which, admittedly, provides a flicker of relief from the general tedium, but should not be so. Looking like an unsuccessfully costumed guest at a decidedly naff Hallowe’en party, she proceeds to beat-up the various men sent to kill her: kicks, stabbing legs, neck-twisting and some rather precarious lifts all tell us of her monstrous nature, and all taken from the Ladybird book of choreography for baddies. Cherkaoui’s movement palette is depressingly predictable; this is choreography devoid of interest, despite being executed by some of the world’s top dancers. Forty minutes tick slowly by and it then finishes and we are grateful for the interval and the dancers can go away and massage their knees.

At least Christopher Wheeldon makes fluent movement, and Within the Golden Hour is as fluent as he gets: pleasing, often beautiful, thirty-five minutes of beautiful bodies in beautiful costumes (this revival sees a redesign by Jaspar Conran who puts the dancers in shimmering outfits, set alight by a ravishing lighting design from Peter Mumford). It was danced by a superlative set of Royal Ballet artists, who brought their thoroughbred physicality to the choreography, but the work is as substantial as a faint scent on the breeze, delightful but fleeting, momentarily ravishing and then forgotten. It is also a cool, if not cold, ballet, bodies moving in space to some pleasing music but it lacks underlying meaning, import – some abstract works do possess it – which would give weight to the choreography. Without it, Within the Golden Hour comes and goes and we think no more of it.

To close, Crystal Pite’s weighty Flight Pattern, a total triumph and a repudiation of any who might suggest dance cannot convey serious meaning. It lost a notch on the dial in its impact by coming at the end of such an insubstantial evening, feeling less a culmination (like Nijinska’s Les Noces and MacMillan’s The Rite of Spring, it is definitely a closing work) and more a relief. Not that there is anything lightweight about this monumental work – set for 36 dancers drawn from all ranks of the company bar the principals, it is a truly ensemble piece. It has a sombre setting – huge grey walls which open to reveal a backstage or close in – and the clothing is equally sub fusc: grey overcoats which are shed to reveal plain singlet tops and trousers. 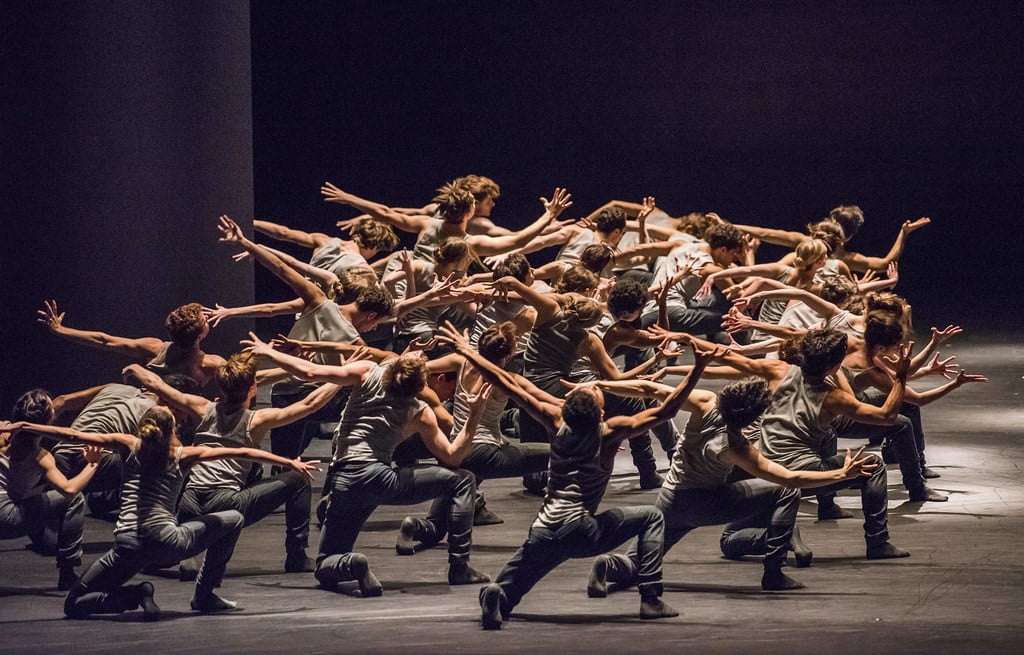 Nothing detracts from the movement, the mood, the meaning. Amid the many reactions to the great refugee movements peaking in 2016/7 stands Flight Pattern, a wholly successful transliteration of a human disaster through the prism of Pite’s artistry. Phalanxes of movement break up, fracture, reassemble as Górecki’s sorrowful music plays out in the pit. There are bursts of individual movement which just as soon sink beneath the communal waves until, as the music shifts and the soprano voice enters, we focus on Kristen McNally and Marcelino Sambé, their lost baby and their plight amid the masses on the same journey. It is intense, powerful and deals with a human crisis without a trace of sentimentality or prettiness.

Pite is not a Classical choreographer, but this is the real strength of Flight Pattern so, just as with Les Noces and The Rite of Spring, a vocabulary all its own seems to grow in the work, the movement exactly apposite to portray what it wishes to portray. It is also a triumph for The Royal Ballet, one of those rare works in which the sense of togetherness is palpable, the communality of their artistry to the fore. One can hope that Medusa will now disappear and expect Within the Golden Hour to return, but Flight Pattern simply must be seen again.