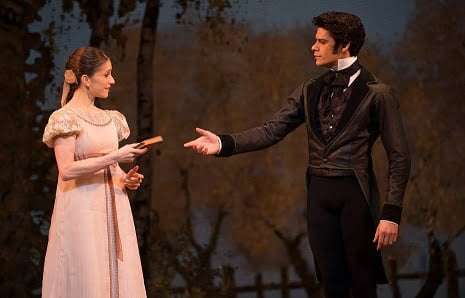 John Cranko’s Onegin sees another strong revival at Covent Garden with numerous role debuts in the run of performances, Saturday matinée seeing all four main characters danced for the first time by their interpreters; in the evening, only wonder-boy Vadim Muntagirov was new to this ballet, and the comparison between the two performances was most instructive.

Itziar Mendizabal, a technically strong First Soloist, finally got her break with the continuing absence from the stage of the seemingly ill-fated Lauren Cuthbertson. She presented a nervy, nervous Tatiana, socially gauche and emotionally fragile. She is a ‘clear’ dancer, who presents Cranko’s choreography in an uncomplicated fashion, and she moved and reacted with great spontaneity. Nehemiah Kish, graduating from Lensky to Onegin has done nothing better at The Royal Ballet – his is an introverted, introspective anti-hero, emotionally cold and detached, and in terms of his dancing, he partnered Mendizabal with unobtrusive strength. Kevin O’Hare’s directorship is already characterised by the way he brings on young dancers, and Nicol Edmonds, only two years into the company, was entrusted with the hothead poet Lensky. He will develop further in this, his first major role, and explore the character’s romantic naivety, but he danced with conviction and clarity, partnering Beatriz Stix-Brunell’s impressive Olga with assurance – she offered a supremely silly, unconcerned younger sister to Mendizabal’s more aware older sibling, dancing with strength. In all, the gamble of four debutants brought considerable freshness to the performance and can be counted as an unqualified success. 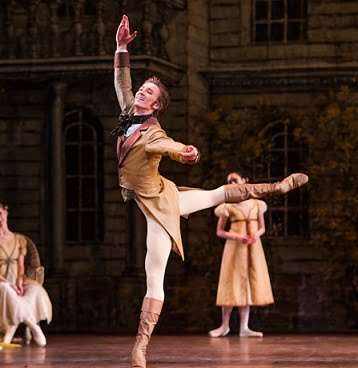 The spontaneity of the afternoon was not replicated in the evening’s performance, whose interpreters were certainly more experienced in their roles but were a little too ‘smooth’ in their delivery. An exception was Vadim Muntagirov’s simply extraordinary Lensky, who delivered his dramatic outbursts convincingly and dug deeply into the emotional torment of the character in his pre-duel solo, danced with heart-stopping grace and precision. Muntagirov is one of those dancers whose movements appear entirely natural, whose sense of line and form seem instinctive. The choreography sings on his body, and in its fusion of exquisite movement and soulful interpretation, this solo became one of the emotional high-points of the ballet.

The husband-and-wife pair Soares and Nuñez makes for a formidable team, and are confident in their roles. However, they lacked the last ounce of abandon in their emotionally charged duets, and their interpretations came across a trifle too studied – he was too demonstrative an Onegin, unnecessarily over-ornamenting his characterisation, and she was clearly working hard to mask her naturally sunny personality and physical strength. The final pas de deux was a triumph of dramatic intensity, both investing their all, but it did not move in the way that some have done.

Dominic Grier, whose conducting of this score I did not enjoy at the last revival, impressed greatly. The orchestra was in lively and engaged form, and Grier established rapid tempos, achieving a Tchaikovskian sweep. My reservations about the production (faithful to the original from fifty years ago) remain: the sets look dated and the lighting is in sore need of attention – it is all too dark and patchy, simply too unsophisticated for performances in 2015.