Aeternum [world premiere, in honour of the centenary of Benjamin Britten’s birth] 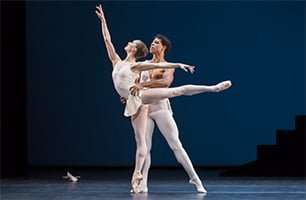 It is both an irony and a tribute that George Balanchine’s 1928 Apollo is still billed as a ‘modern’ classic. Indeed, one could argue that in The Royal Ballet’s new Mixed Bill, it comes across as the most avant-garde work on show, and that is alongside two world premieres. The company has a distinguished record of performing this masterpiece, and this was a loving and effective revival, overseen by the great Balanchine dancer Patricia Neary. The company preserves the opening scene of the birth of the young god that the choreographer later excised and which has become the norm around the world. That is other’s loss, because not only is it visually striking, opening the ballet with Leto (the intense Christina Arestis)atop the famous stairs in a shaft of brilliant heavenly light, but it also establishes a narrative which ends with Apollo ascending to the same place (to be carried off to Mount Parnassus in an airborne chariot in the original). Long may The Royal Ballet continue to perform this version. 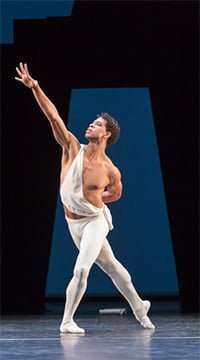 Carlos Acosta’s interpretation of the title role is familiar and effective, somewhat more Dionysian than some cooler dancers, true nevertheless both to his own personality and the work itself. Acosta understands the part, and its demands, although more divine imperiousness at times was needed. His remains, nonetheless, a more-than-valid view of the part, showing a youthful impetuosity and fascination with Marianla Nuñez’s expertly delivered Terpsichore; indeed their pas de deux was a high-point, her extended line entirely at the service of Balanchine’s creativity. Olivia Cowley brought welcome cheekiness to Calliope where many performers dance with po-faced carefulness – hers was a successful role debut. Alas, Itziar Mendizabal, who has scored hits this season with her Firebird in Fokine’s ballet and Jealous Sister in MacMillan’s Las hermanas was a stiff and inexpressive Polyhymnia, missing much in her demanding solo. Would that Barry Wordsworth had decided on a less languid interpretation of Stravinsky’s score – greater impetus and tonal asperity would have lifted the whole performance. The composer’s own 1964 recording with the Columbia Symphony Orchestra is revealing. 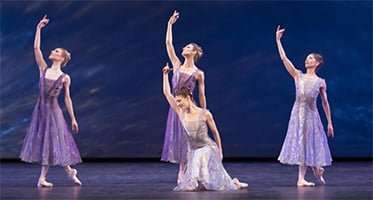 And then on to two new works. Surely the immortal words ‘not another Chopin piano ballet’ must have rung out at Covent Garden when Russian choreographer Alexei Ratmansky chose that composer’s 24 Préludes as the music for his first commission? True, there has been something of a glut, with the company performing Jerome Robbins’s In the Night already this season (set to four Nocturnes), and the same choreographer’s Dances at a Gathering and The Concert also in its repertoire. The difference for Ratmansky is that he has opted not to have a solo piano but to use the music in Jean Françaix’s over-cooked 1697 orchestration. This, alas, saddles his new work with a score of monumental vulgarity; Françaix employs the batterie de cuisine approach to his orchestration, throwing everything at Chopin’s compositions – walls of brass, timpani and woodwind – much in the manner of Rüsager with Czerny’s etudes for the ballet of the same name. 24 Preludes, therefore, sees the light-of-day somewhat on the wrong musical footing. Additionally, the work is simply too long – 16 of the 24 preludes would have sufficed. All that said, Ratmansky is welcome; he is one of the very few choreographers in ballet today who achieves a high degree of classical fluency and who clearly views the art form with confidence; confidence in its validity in the twenty-first century and therefore eschewing the distortions, tics and twitches that now seem de rigueur from choreographers who do not share his view. 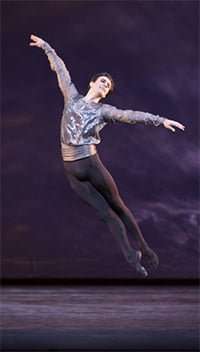 24 Preludes brims over with invention, steps linked together with both intelligence and style, inventiveness apparent in all that he does. The work is cousin germain to Robbins’s Dances at a Gathering, a series of solos, duets and ensembles for a small cast (here 8, in Dances 10), but lacks the last ounce of cohesion that characterises the older piece. There is, however, a feeling of community at play here, and Ratmansky has been very astute in picking up on both the movement quality and temperament of his dancers – the solos for McRae, Watson, Yanowsky and Benjamin in particular display this. There are also references a-plenty; Ratmansky is something of a magpie choreographer, used to picking up elements of others’ works which he fuses with his own creativity (his recent Golden Cockerel for the Royal Danish Ballet successfully fused what remains of Fokine’s choreography with his own). I detected several references to works by Ashton which have been appearing recently at Covent Garden – Benjamin, for instance, is lifted aloft by Hristov in a direct quotation from the Thaïs pas de deux which the couple have recently been performing. Despite the caveats, Ratmansky has made a fine piece for his octet of dancers which will be worthy of revival. Neil Austin’s lighting design was too dark, and his approach to lighting the back-cloth in the manner of a computer screen-saver added little. (Colleen Atwood’s decision to change the men’s black tights for a lighter shade at the next performance was a wise decision, given the gloom and the resultant near-invisibility of the men’s bottom halves.) 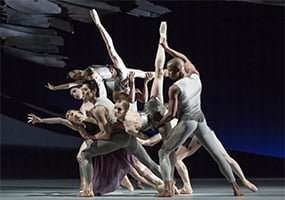 Christopher Wheeldon’s latest creation Aeternum musters little enthusiasm. At least he has gone for a good score – Benjamin Britten’s Sinfonia da Requiem, here emphatically played by the Covent Garden orchestra. However, biting off more than he could choreographically chew (until the last movement, Requiem aeternam), his creativity simply does not match the composer’s large-scale invention. Starting somewhat in the manner of a ballet school choreographic competition winner with the cast all exhaling together and gesturing out from Marianela Nuñez’s prone body, the first Lachrymosa section meanders dangerously. Nehemiah Kish emerges to partner the suitably anguished ballerina as four couples often mimic their movements. The sculptural construct at the back of the stage, a sort of huge wing by Jean-Marc Puissant, is striking and Adam Silverman’s lighting, as throughout the piece, is virtuosic. 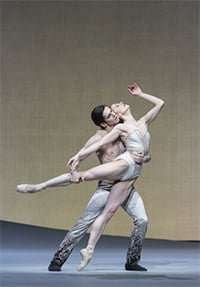 Puissant’s first movement costumes are pleasing enough but matters take a sartorial nose-dive in the second Dies Irae movement when the men are clad in orange hot pants and what are for all the world loose T-shirts that have been given the London Fashion Week treatment. What they, and indeed the choreography, have to do with the Dance of Death is anyone’s guess, but at least James Hay, a hugely promising young male dancer in the company, is given much to do even if it is in a generically jumping, leaping and spinning manner, in the style of Steven McRae’s Spirit of Fire in Wheeldon’s section of Homage to the Queen. For this movement, the ‘sculpture’ lifts and turns to reveal itself as an enormous construction which is almost as wide and as tall as the stage itself. Striking, beautifully lit, perhaps even winner of the World Balsa Wood Modelling Competition, it must have cost a fortune. Its glory is short-lived as it is hoisted aloft and out of sight for the final section leaving a clear stage (albeit with one corner artfully curled up as with a piece of paper) for a bare-chested Federico Bonelli, clad in ice-skater’s trews, to partner Nuñez in a typically Wheeldonian pas de deux. It is rather lovely, involving his trademark tricksy lifts, and presents this beautiful ballerina to great effect.

Nuñez and Bonelli close the work, her soul presumably now at rest, turning away from the audience and moving slowly upstage in a reverse evocation of the end of MacMillan’s Song of the Earth. Alas, it is only in this final third of the ballet that Wheeldon seems to get anything like into his stride and work within the music rather than overlaying movement onto the sounds emerging from the pit.