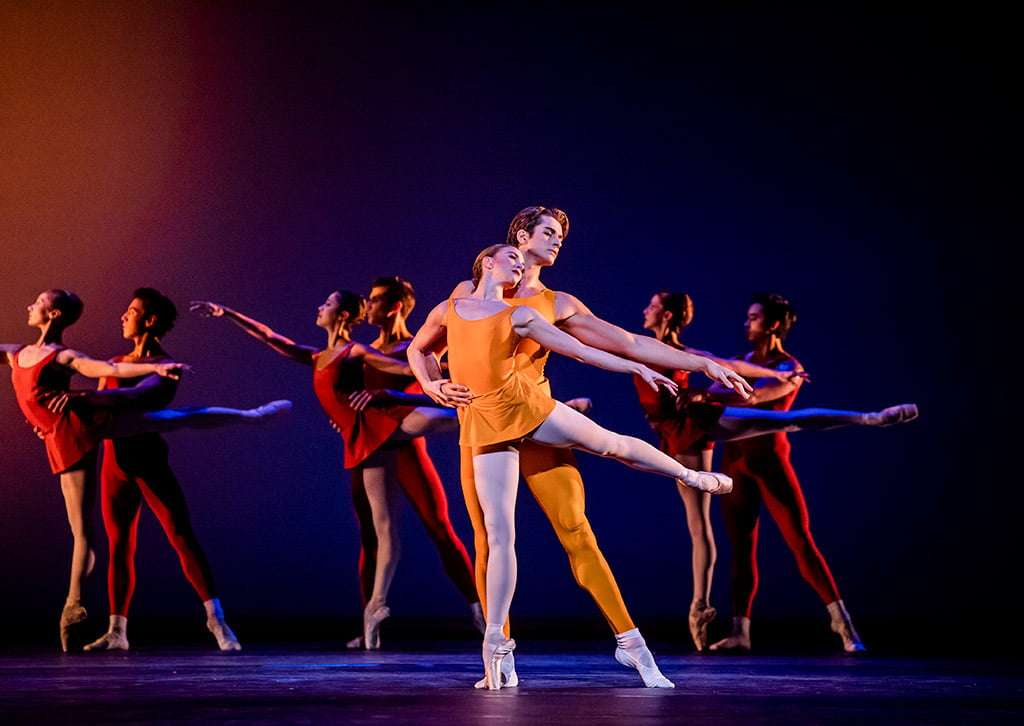 For anyone who knows, respects, loves classical dance in this country, The Royal Ballet’s latest mixed bill is a Christmas treat come early, a superb trio of works which encapsulate the brilliance at play in the late 1960s. From the bedrock of Russian classicism, the best bits of Marius Petipa’s Raymonda were brought together in 1969 for the company in a one-act divertissement by Rudolf Nureyev who performed extensively in the UK and with The Royal Ballet in particular and brought renewed interest in the art form not least with his now legendary dance partnership with the company’s prima ballerina assoluta Margot Fonteyn. From Frederick Ashton, whose tastes and choreographic genius established the ‘English’ style, his elegiac Enigma Variations from 1968, and from his successor Kenneth MacMillan the playful yet challenging Concerto, dating from two years before and first performed at Covent Garden in 1970.

Concerto was created by Sir Kenneth at the beginning of his directorship of the Deutsche Oper Ballet, Berlin, in 1966 and was intended to meld a strong company and to challenge it technically. Those challenges are no less daunting 53 years later – fast, precise movement, at times quirky and unexpected, underpinned by a precise musicality – and, indeed, the opening movement of the work showed just how no less easy the choreography is for the dancers of today. Neither Anna Rose O’Sullivan nor new Principal Marcelino Sambé looked particularly comfortable, she visibly nervous, her dancing taking on a brittle quality, he smiling as ever, but finding it hard to make sense of the peculiarity of the movement or to find the phrasing which would help him do so. Not that matters were helped by Pavel Sorokin’s sluggish tempos, which did nothing for Shostakovich nor the dancers; the three soloist couples, fine dancers all, were simply not hearing the music in the same way and MacMillan’s synchronised steps for them suffered accordingly. 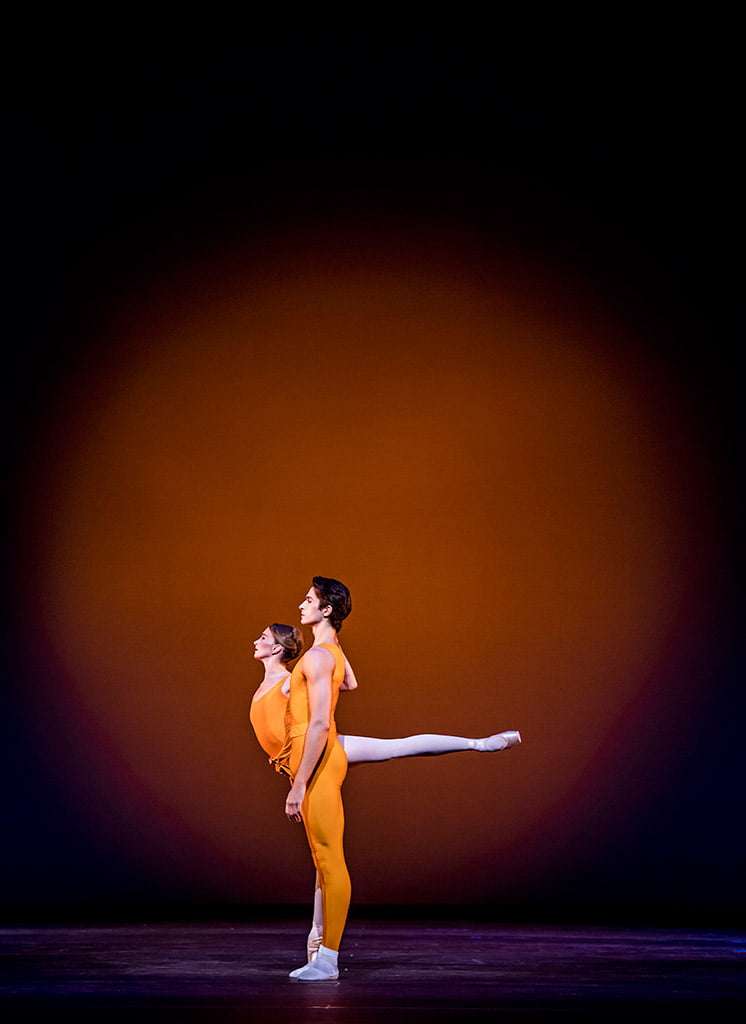 The central movement is essentially a protracted pas de deux, and with Lauren Cuthbertson and Reece Clarke, a handsome stage pairing indeed, normal service was resumed, with calm, control and beauty to the fore. One or two slight partnering wobbles apart, this was a creamy performance of this mesmerically beautiful duet, both dancers utterly centred and in accord with each other. Clarke continues to impress – tall, long-limbed, he never indicates that his height is a problem, having superb control and strength to achieve speed and detail. He is also a sure partner, and Cuthbertson was able to attain that plain of detachment which allows pure dance to happen. The lively third movement allowed a perky corps de ballet to go through its semaphore messaging and bobbing, even if Fumi Kaneko, normally a dancer to admire, showed that the soloist part was most definitely not for her. Jürgen Rose’s hot orange, red and yellow unitards allow every aspect of every body, every detail of every step to be seen with total clarity – in Concerto, there is no hiding. ★★★☆☆

No complaints about a delightful performance of Ashton’s exploration of friendship, devotion, love and the core loneliness of the artist. This work has been carefully revived, striking the difficult balance between faithfulness to the choreographic text while allowing the artists to find their own way into their parts. Enigma Variations offers the quintessence of Ashton’s genius for imbuing movement with character, so he brings each of Elgar’s ‘friends pictured within’ to life, rounded portraits all, often created with the subtlest of means, a gesture here, a tilt of the head there. Alongside Christopher Saunders’s intensely human Elgar, a new Lady in the person of Laura Morera who invested her extraordinary talent for characterisation in this portrait of devotion and love. Every detail was telling, yet none was overdone and certainly she succeeded in making every movement seem spontaneous. Simply ravishing. Bennet Gartside brought gravitas to A. J. Jaeger and his trio with Morera and Saunders in the powerful ‘Nimrod’ variation brought many a tear to the eyes of the audience. 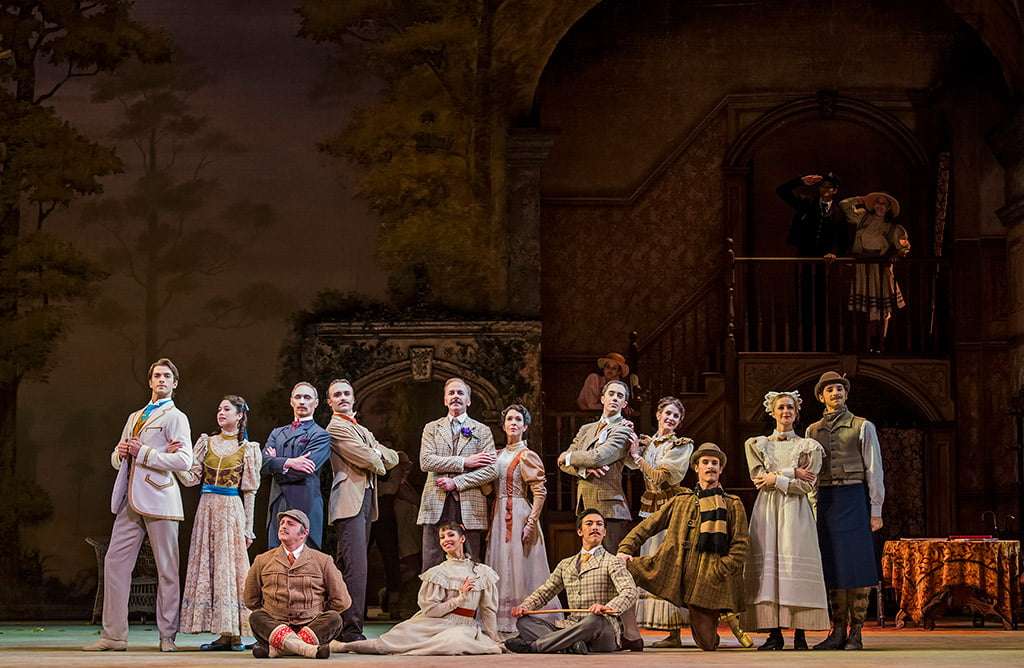 Paul Kay, a soloist who has always brought a vital, mercurial quality to his dancing was a notably affable Hew David Stewart-Powell with his bicycle, while Calvin Richardson whipped up a storm as a tempestuous William Meath Baker, all changes of direction, stops and starts. Luca Acri was a magnificently fleet-footed George Robertson Sinclair. There can be no more adorable a Dora Penny than Francesca Hayward, her filigree steps beautifully executed and phrased and her shy, stuttering personality clearly portrayed while Itziar Mendizabal conjured up the vision of the absent Lady Mary Lygon in all her generous grandeur. Enigma is an ensemble work, a gathering of dancers who must make us believe in the relationships between their characters so it is good to remember that Ashton created it in 1968 after he had learned that he was to step down (unwillingly) as company director and so he brought all his closest dance collaborators together to make a ballet about friendship, love and loyalty. ★★★★★ 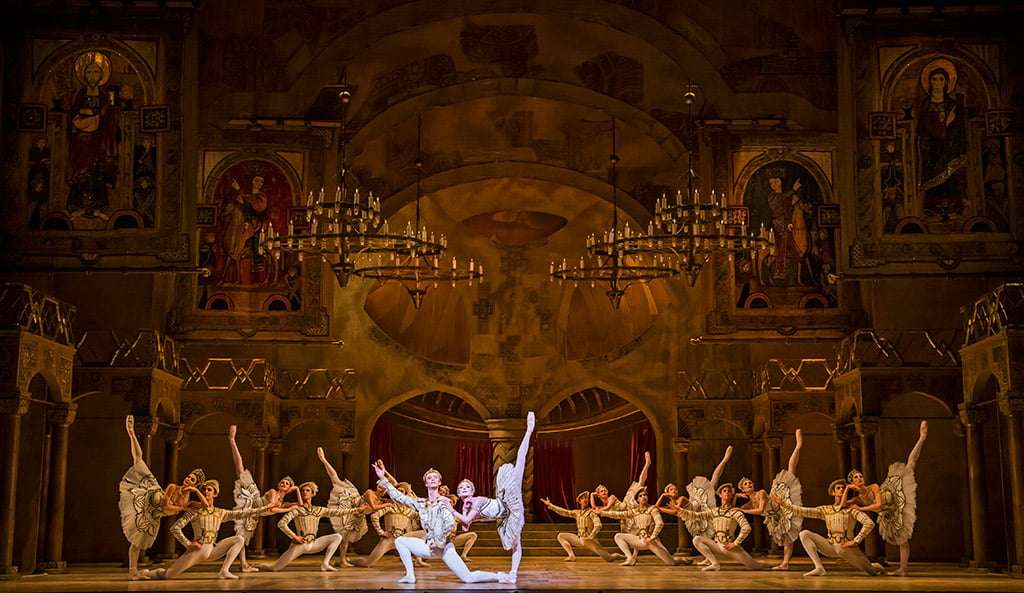 Nureyev’s setting of Raymonda Act III was first danced at Covent Garden in 1969 in Barry Kay’s sets which, fifty years on, still elicit applause as the curtain rises after the stirring overture. This is a showcase of classical dancing, a grand divertissement which demands technical brilliance throughout, which the current Royal Ballet is well placed to offer, given its strength throughout the ranks. Technically at ease in all aspects of the role, Sarah Lamb was content to leave it at that, so one missed the playful haughtiness of the finest Raymondas and it was left to Vadim Muntagirov, replacing a sadly injured Steven McRae as Jean de Brienne, to quicken the pulse with bravura dancing of the highest order. Such is the beauty of the shapes that he makes, such the purity of his technique and line, such is his breezy insouciance that Covent Garden purred in delight and then broke into a roar at the end of his impeccable variation. Mayara Magri, a dancer of both strength and character, was simply a firecracker in Variation Four, devouring the space of the stage and shining with joy and confidence, while the fearsome men’s pas de quatre, a test of precision and shared musicality which has defeated many a quartet over the decades, was superbly danced by the homogenous grouping of Luca Acri, Cesar Corrales, James Hay and Calvin Richardson. Special mention to Christina Arestis and Nicol Edmonds who led the Hungarian Dance with requisite Magyar zip. Sorokin seemed far more at home with Glazunov than the two previous composers and the orchestral sound for Raymonda swelled suitably with fin de siècle lushness. ★★★★★

On the evidence of this programme alone, the end of the 1960s was indeed a golden era for The Royal Ballet in terms of choreography – it is perhaps cheeky to wonder how many of the recent creations for the company will be deemed worthy of revival in fifty years’ time. What can be said, however, is that these works continue to be superb vehicles for the artists of today, offering technical and interpretative challenges and all three remain essential elements of the company’s history and heritage.