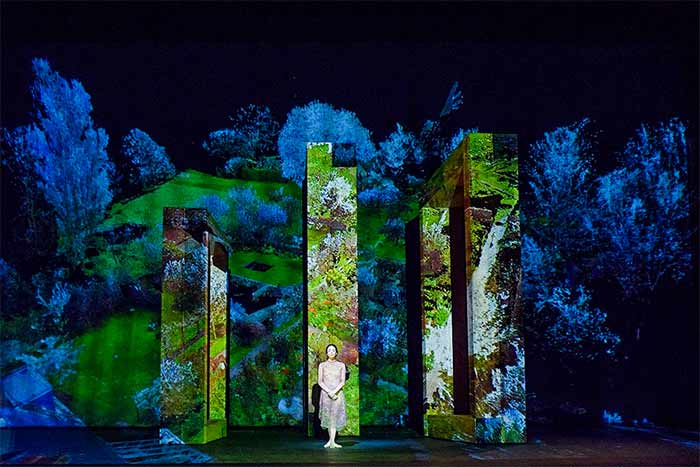 Woolf Works, Wayne McGregor’s ambitious, Virginia Woolf-inspired trilogy of ballets-in-one evening returns to Covent Garden. When first created, it was widely heralded as a genuine departure for the choreographer who appeared to have adapted his own style, characterised by an extreme physicality, into something rather more lyrical, more in keeping with the company’s historical way of moving. On revival, that impression is confirmed. Woolf Works contains much to admire even if there are sections which seem to bear little if any relation to the literary work which inspired them: Becomings, inspired by Orlando, features Elizabethan costume to begin, but the tale of the gender and time-shifting Orlando is then lost. Similarly, in Tuesday, it was perhaps a little too neat that Woolf, who drowned herself, also wrote The Waves – there is nothing to be seen of her experimental work which explores individual and multiple consciousnesses, the focus being rather on Woolf’s eventual suicide. The most ‘narrative’ of the three sections is the first I now, I then, which does conjure up scenes from Mrs Dalloway, McGregor ably interweaving the lives of the young and old eponymous character. 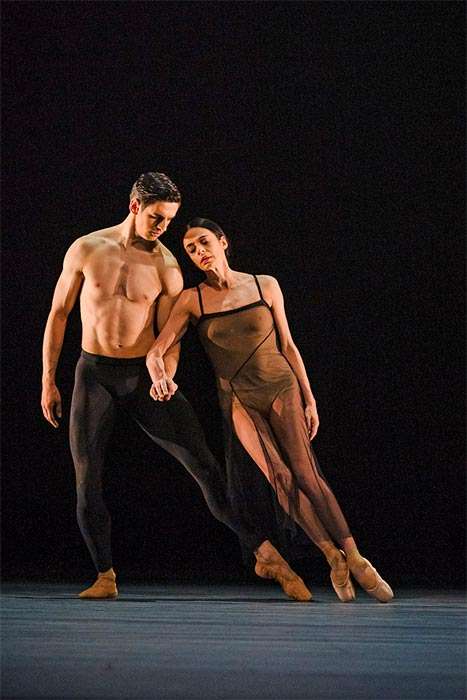 Woolf Works is certainly a big undertaking which, as ever with this choreographer, calls upon a selection of designers to make his imaginings real; each section has a different visual concept from a different team. Tuesday, featuring a back-screen (onto which is projected footage of crashing waves) and side columns of lights is very much McGregor’s own style, as seen frequently in works for his own company Wayne McGregor|Random Dance; Becomings features golden shimmering costumes and a light show by virtuoso designer Lucy Carter which is choreography in itself; I now, I then, has perhaps the most traditional approach with a stylish mise en scène of three rotating giant squares and projections with costumes cleverly evoking period.

Becomings, which is closest to ‘typical’ McGregor in terms of movement, is a high-octane blast for the dancers but rather monotonous for the audience, and distinctly overlong at 35 minutes. As the central panel of a triptych, it certainly contrasts with the other two sections, but it would, one suspects, work better as a stand-alone which would not then emphasise the tenuous link it has with the overall Woolf concept. No faulting the dancers who perform McGregor’s crotch-splitting choreography as if to the manner born; they comprise a stable of the choreographers ‘favourites’ who appear again and again in his works and seem to understand his vision. Much to admire in terms of physicality, a jolly nice light show and some striking costumes.

As proof that this art form continues to rely on stars, the impression given by the two sections which frame Becomings is distinctly more favourable with the presence of Alessandra Ferri. Now in her mid-50s, this ex-Royal Ballet Principal constantly draws the eyes to her, her presence remarkable, her movement quality as special as it was in her 20s. She provides a still, deep centre to both I now, I then and Tuesday, her dark eyes radiating emotion and intensity. In the former, she walks the stage, interacting with her husband (the wonderful Gary Avis, who, as a character Principal and Ballet Master also donned the bizarre costumes of Becomings to show most emphatically that he can still ‘do it’!) and her young self. She weaves her way through this impressionistic narrative with meaning and purpose, making this first section the most intriguing and satisfying. She danced with Federico Bonelli in both sections – they make for a well-matched and complementary couple, so it very good news that they are to be reunited in Ashton’s Marguerite and Armand later in the season. 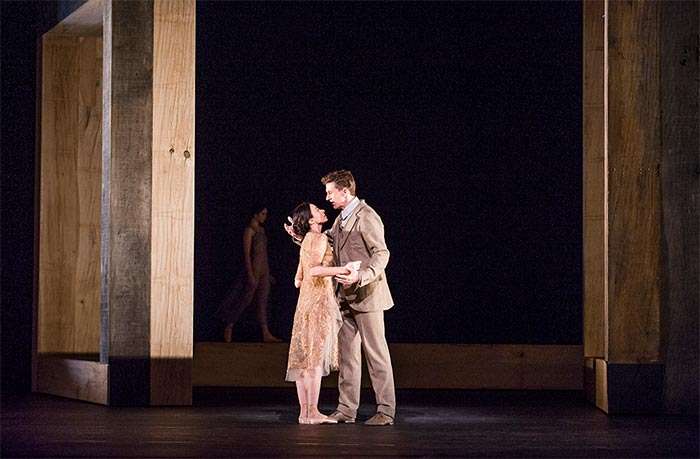 Tuesday is an extended lament which draws Ferri/Woolf closer and closer to her annihilation. Max Richter’s score is particularly effective here, especially with the use of a soprano voice which soars above the orchestra. A large corps de ballet flows and ebbs across the stage like water on a beach, a swirling ensemble which teeters at moments on the messy but is undeniably effective nonetheless.

Woolf Works remains an achievement for McGregor. It is admirable, although, as with all his work, difficult to love; with the inspiration of Ferri, he certainly gets closer to ‘beautiful’ and ‘meaningful’ movement than in the majority of his output but, apart from her central part, it is difficult to see how any role can develop and grow in performance. As a result, it does not quite break out of the two-dimensionality that typifies his work – McGregor remains a wysiwyg choreographer – what you see is almost always what you get, however superficially impressive.