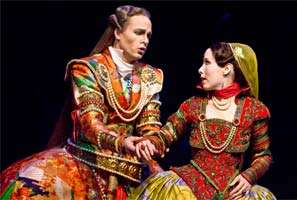 The first revival at Covent Garden since the 1840s of a musically fine and historically important opera by arguably the greatest native English stage composer of the eighteenth century deserves to be hailed as much as the purchase for the nation of a major work of art by an English painter.

Thomas Arne’s “Artaxerxes” was for many decades popular in the English-speaking world, and no wonder; its misfortune was to suffer the loss of both recitatives and choral finale in the destruction of the Theatre Royal (predecessor of the current Royal Opera House) by fire in 1808, after which its stock fell. Ian Page has written substitute recitatives for those lost and Duncan Druce a final chorus for Act Three in period style.

Comparison with that naturalised English composer Handel is, I suppose, unavoidable. Tackling the issue head on, “Artaxerxes” has neither the depth of Handel’s most morally searching operatic works, nor the wit of his humorous writing. It does though boast the composer’s rich vein of melody, his orchestral invention, and his economy. There is also much more variety of form than in Handel’s operas, with their subservience to the da capo aria. Strophic arias, rondos and other formats, all of them characterised by brevity, are to be heard among the twenty-six solo numbers.

The Overture is surely a masterpiece, with its contrasted three-part structure, the first section delivered here with buoyancy and crispness, the second a stately minuet and the third reinforced with trumpets and drums. The accompaniment to the opening duet of parting for Mandane and Arbaces was too loud and their words were drowned. This partly spoilt the brilliant opening to the opera, the sequence of overture, duet and aria for Mandane ‘Adieu, thou tender, lovely youth’, with its cooing flutes and concluding cadences, Gluck’s ‘Che faro’ avant la lettre. Elizabeth Watts, yet to dominate the stage as she was to do later, nevertheless established her musical credentials with immaculately smooth divisions in this number. 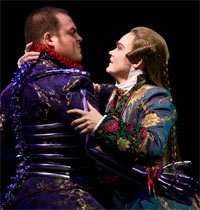 Arbaces, the role originally taken by the castrato Tenducci, was here astutely given to a singer, the Australian mezzo Caitlin Hulcup, whose timbre was uncommonly similar to that of a countertenor. This made it possible to draw subtly different characterisations of the two. Where the eponymous prince struggled to establish a decisive presence dramatically, Arbaces stood out powerfully. He was played as naïve from the start and his keeping the sword which later incriminated him emerged as credible. When accused, he emerged as a highly strung personality, noble but hyper-sensitive. Hulcup offered a vocal characterisation which was on the edge. The emotional weight with which she delivered the recitatives, the impetuous protestations of innocence and the intensity of her relationship with Mandane were elements of a detailed acting performance of the highest quality. Musically they were complemented by meltingly beautiful singing in her less-showy arias and the two duets. ‘O too lovely, too unkind’ is a sublime number and, as announced here by Hulcup’s daring sustained opening note and supported by its carpet of muted strings, was a highlight of the evening.

Artaxerxes has the blander relationship, with Semira, and his apostrophe to her, ‘Sweet Semira, lovely maid’, is more conventional, less arousing, than Arbaces’s love music, well though Christopher Ainslie sang. Andrew Staples’s sharply focused tenor, currently a character instrument but with clear potential for leading parts, was ideal for the role of Artabanes. He was entirely convincing as the manipulative, Machiavellian generalissimo. In his first scene with Artaxerxes the director brought out explicitly how he cast a spell over him, turning the three-part aria ‘Behold, on Lethe’s dismal strand’ into a dynamically evolving number, softening his victim up with a depiction of the tragic sight of the dead king before issuing the irresistible incitement to revenge. It is a clear weakness of the work that he was unable to inspire pathos when faced with the poisoning of his son in the final Act. He was costumed like a Samurai warrior, one of several hints of Japanese influence in the staging. 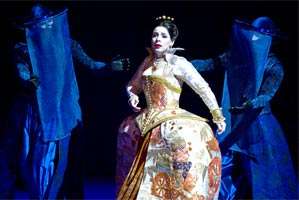 The production generally enhanced the musical performance. After the first Act director Martin Duncan introduced the device of singers’ delivering their arias before folding screens, onto which brightly coloured light was projected to accentuate the emotional mood. Artaxerxes’s ‘In infancy our hopes and fears’ was bathed in green, Artabanes’s black costume flooded with red for ‘Thou like the glorious Sun’, while during Rimenes’s clumsy attempt to woo Semira in the aria ‘To sigh and complain’, she it was who was trapped in front of the purple screen, paralysed and unable to escape.

Use of the stage space included the walkways on the three sides of the orchestra pit in this intimate auditorium. Artaxerxes circled the walkway in one case, stopping in the centre to address the audience directly from a distance of a few feet. Four extras, kept anonymous in various costumes, sometimes full-length black veils, sometimes warriors’ breastplates and helmets, moved pieces of stage furniture such as the screens and, more controversially, intervened in the action. I did not understand what they were doing making various stylised movements, such as when around and with Arbaces in the prison scene at the start of Act Three. They did, however, produce one moment of powerful drama: in the penultimate scene of Act One, as Arbaces pleaded his case to Mandane, his attempts to reach her were obstructed by the guards moving swiftly out of their arrow-head formation to form a barrier between the two characters.

Details of the Personen-Regie were often illuminating. Rebecca Bottone’s voice has a girlish texture to it, while stopping short of shrillness, which suited Semira’s lilting aria ‘How hard is the fate’. The ambiguity of her position, convinced that Artaxerxes as king will have to forsake a lowly subject such as her but still appealing against hope, was embodied in her circling of the walkway, stopping at each pause in the music to stretch out her hands in supplication. Other examples included the tension between Mandane and Semira, Artabanes’s ability to intimidate his ally Rimenes (tidily sung and strongly acted by Steven Ebel) and the way Mandane kept her distance from Artabanes in one encounter as he crossed the stage.

The practicalities of entrances and exits were well served by Johan Engels’s designs, which were generally simple and subject to brisk movement. The function of one of them was not revealed until the final moments when the extras confined Artaxerxes in the armour-like structure which had occupied the central area upstage in the first Act, then released the latches to allow him to reign, presumably in peace. The lighting design by Nicholas Michaletos was sometimes expressionistic and often beautiful. 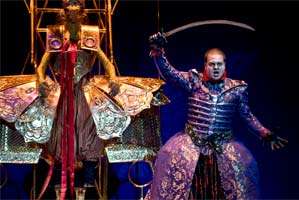 “Artaxerxes” was presented without forgetting its entertainment value. Serious though its subject-matter and agonising its dilemmas, this production does not take things too earnestly The costumes, with wide skirts over baggy Turkish pants for the women and lavish flared jackets for the men, all elaborately embroidered, as well as the manipulation that the characters occasionally met at the hands of the extras, suggested marionettes rather than real human beings. Given that, I failed to understand the significance of the extra embellishments which Mandane and Artabanes acquired over their skirts in the closing stages, the villain a metallic cage (punishment, perhaps) and the much-put-upon heroine elaborate gilded frills (an award from the monarch’s Honour’s List?).

I give full marks for the casting and especially for the star-quality of Elizabeth Watts. Her first-Act bravura aria ‘Fly, soft ideas, fly’, laced with testing divisions and surmounted by high Cs, left one thinking what a phenomenon Charlotte Brent (the creator of the role and Arne’s mistress) must have been. Watts was equally at home in the subdued self-defence of ‘Let not rage, thy bosom firing’, cleanly taken high B flats notwithstanding. Her access of loathing against the merciless devotion to justice of Artabanes in ‘Monster, away!’ was expressed with biting attack. ‘The soldier tir’d’ was predictably dazzling but Watts let an out-of-character twinkle enter her eye, bringing with it an invitation to leave behind the world of Metastasian make-believe, its happy ending emphasising the artificiality of the entertainment.

Ian Page emerged from the among the musicians who had casually congregated in the sunken white box of the orchestra pit to open the first two Acts but made a more formal entrance to accept an ovation before Act Three. His instrumentalists played splendidly. The sustaining horns were faultless throughout, the oboes fitted effortlessly into various guises and the trumpets and drums framed the drama with a suitably festive abandon. All those involved clearly believed in the work.

A good return home for a worthy theatrical work, then. Producing it with the forces of the Classical Opera Company at the Linbury Studio Theatre suggested a case of dipping a toe in experimental waters. Perhaps there may be a case for moving it to the larger venue.