A spectacular show of magic and illusion from Arturo Brachetti, the fastest quick-change artist in the world
Concept by Serge Denoncourt, based on the repertoire of Arturo Brachetti
Music by Simon Carpentier 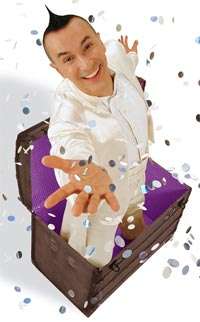 The art of quick-change, in which a performer changes costume in a split-second within sight of an audience, goes back as far as the 15th-century. The Japanese used the form in its Kabuki theatre performances from 1603, and the Chinese also have a similar form called Bain Lean. It was popular in Italy from 1600 in the Commedia dell’Arte companies and in the performances of Giovanni Gabrielle who did a quick-change-of-costume act in the squares of Bologna. Later on, magicians used the effects in their stage acts. One of the greatest acts was Leopoldo Fregoli who, in the late-19th-century, was so expert that audiences began to suspect that there was more than one performer involved. He challenged doubters to visit him backstage to see that there was only one Fregoli.

Arturo Brachetti pays tribute to the work of Fregoli whom he considers to be “the greatest transformist of all time” but Brachetti is no slouch and must be considered the rightful inheritor of Fregoli’s many mantles. Brachetti’s other influence is that other great Italian illusionist, Federico Fellini, who created his own movie world in which fiction and reality overlapped. Brachetti is no stranger to London. In the mid-1980s he was nominated for a Society of West End Theatre award for his show “Y” which ran for a season at the Piccadilly Theatre offering a colourful mixture of music, dance, cabaret, magic and illusion. He has also played at the National Theatre in Tony Harrison’s “Square Rounds” and performed in a Christmas gala at Covent Garden for the Royal Family. 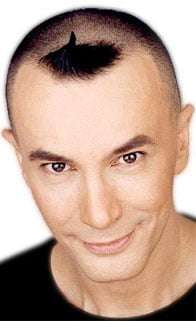 Brachetti has to be everything, including actor, comedian, singer, dancer, philosopher and illusionist. He is remarkably fit and seems to give his performance with the least amount of effort, although there is no doubt frantic activity behind the scenes.

There is a loose narrative to “Change” in which the older Arturo is looking back on his life through the skilful use of film, video-projections, split-screens and frantic costume changes. He is preparing a new show for London and we are shown the results. Like a tourist he begins with typical London landmarks, changing from guardsman to pinstriped businessman, to pearly king, to punk rocker and then The Queen, all in a blink. Look away and you’ll find you have missed a treat. It is an illusion, but it is amazing that it can be done at all. Only a shower of confetti, the raising of a hand or the swish of a piece of cloth cover the fact that Arturo can have a complete change of costume at the snap of his fingers or can go from wearing black to white literally in the twinkling of an eye.

What is also staggering is the beauty of the trickery the colours, the nod to painters such as Matisse and Mondrian and, perhaps best of all, a lovely joke about Vincent van Gogh followed by a suffusion of sunflowers spilling all over the stage. A set-piece like his obsession with Hollywood movies is a terrific tour de force, running through iconic titles such as “Gone With the Wind”, “The Sound of Music”, “The Wizard of Oz”, “Singin’ in the Rain”, “Jaws” and “Psycho” plus the likes of Carmen Miranda, James Bond, Harry Potter and even Nosferatu. And as for “Casablanca” Arturo even manages Bogart’s ‘hill of beans’ speech dressed as both Bogie and Bergman. Another interlude involving the old trick of projected silhouette figures using only his fingers, and the illusion of him playing the violin while being attacked by a third arm are simply priceless. His tribute to Fellini is both bewitching and moving as Arturo recreates some of the Italian master filmmaker’s most celebrated moves.

Technically speaking it is a coup de theatre, with brilliant lighting designed by Alain Lortie, extraordinary costumes – and so many of them – by François Barbeau, and an exquisite sound design by Larsen Lupin coupled with music by Simon Carpentier plus a polished mix of movie themes and film-studio logo fanfares. The whole show is contained within a huge and literal box of tricks, a revolving cube of openings that reveal the magical world of Arturo Brachetti.

What too is most extraordinary about “Change” is that it is a live show in an age when it is far too easy to generate illusions through computer animation. With only a single performer demonstrating what seem to be an endless number of illusions, this show is a jaw-dropping experience so full of fun with an appeal to all ages. It would be hard to imagine a better Christmas show for a family. With a dearth of pantomimes in the West End, this is a bold substitute, a visually colourful and aurally outstanding piece of theatrical magic.