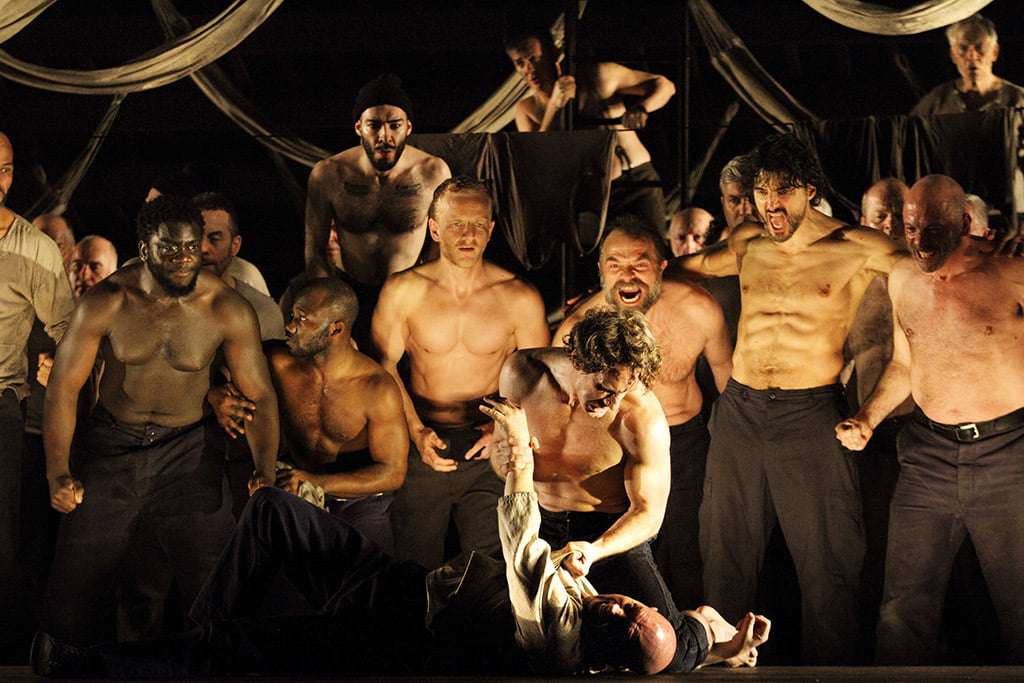 Deborah Warner’s production of Britten’s Billy Budd has already been seen in Madrid (2017) and in Rome (2018) – the first time ever for the tragic tale of poor Billy in both cities – and arrives back at the Royal Opera House (where it had its premiere in 1951, in its four-Act version) after an absence of two decades. It was the work in which Britten really got into his operatic stride as a master of drama, orchestra and character, bringing a huge cast to life with great confidence.

It is this aspect that Deborah Warner favours in her impressive but sprawling, over-gestural, staging. Her designer Michael Levine gives us the basics of a man-o’-war in 1797, with ropes, decks that move up and down, ladders, sails hoisted and lowered, but Chloé Obolensky’s costumes are contemporary and vaguely fascist, with white peaked caps for the officers, grubby sweatshirts (when they are being worn) for H.M.S. Indomitable’s crew. The updating adds and explains nothing. Warner also reduces the distinctions of naval rank that E. M. Forster and Eric Crozier reproduced with Patrick O’Brian-style fastidiousness to a basic application of authority, and apart from some minimal watery projections the staging keeps the ocean at arm’s length. 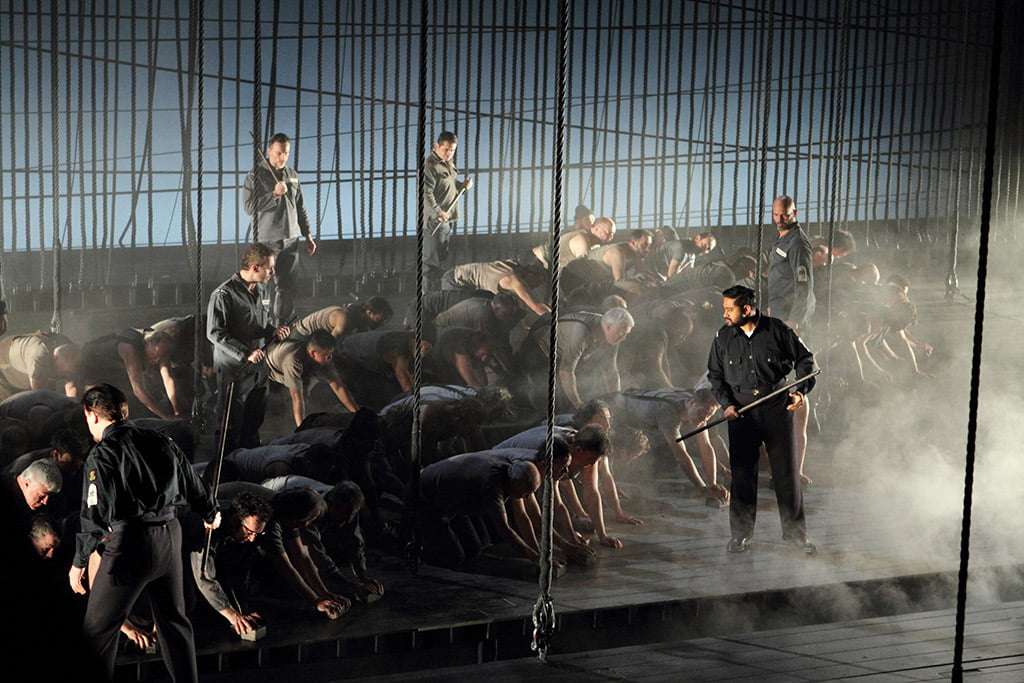 The set’s adaptability, often like a cut-away diagram, gives some stunning images of the ship, and in the end it is the big gestures – the marshalling of the crew to do battle with a French warship that keeps vanishing into the mist; the sailors’ bunks arranged like a stylised sea – that stay with you.

The main thing, though, is Warner’s playing down of the homo-eroticism Billy unconsciously exerts on good Captain Vere and the evil Claggart, inevitably intensifying its powerful but subliminal role. There is one absent-minded touch on the shoulder from Vere to Billy, one unexpectedly moving laying on of a hand, like a blessing, from Billy to Vere, and of course Billy’s punch that murders Claggart and results in Billy’s sacrifice on the altars of good and evil. In the process, Warner gives the opera’s Christian allegory its head without any tub-thumping directorial contrivance, and perhaps this is her production’s biggest gesture. 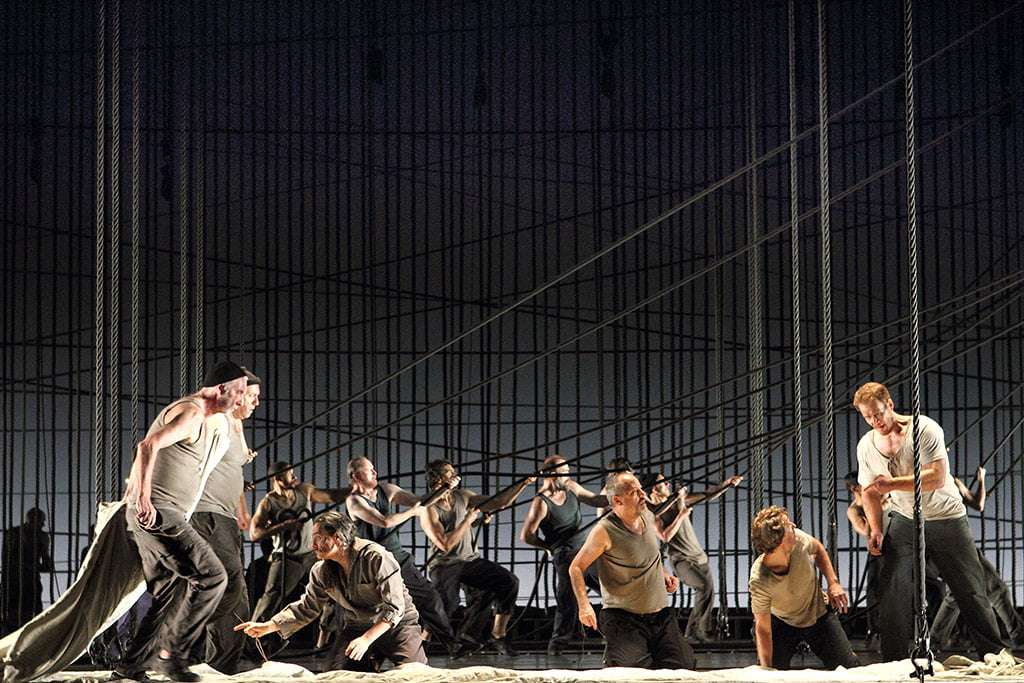 Jacques Imbrailo has made the role of Billy his own during the past decade and he radiates youthful hope and innocence in lithe, observant acting and singing that flows easily from heroic optimism to anguish, while the direction subtly blurs Billy’s agency as sailor, holy fool and saviour. As Imbrailo’s ‘Billy in the Darbies’ went ever more shadowed and quiet, the more it became like part of a Passion setting. You get the overwhelming sense that only Billy’s elemental goodness can release Claggart’s equally elemental, all-consuming hatred, and Brindley Sherratt is dismayingly effective as the ultimate in doomsday pessimism, but without the grandeur of Milton’s Satan. Sherratt’s voice is dark, large and pitilessly focused, and, crucially, he is very still – and lethally convincing.

Toby Spence’s Vere starts gloriously, yet it is hard to get an idea of the fatal dynamic between him and Claggart. The staging’s spaciousness works against a close-up of the mutual repulsion between the two men, so that at first you have to take the establishment of evil for granted. Spence comes into his own in the trial scene, when his voice blooms in line and fullness, but then the direction falters badly in the sequence of thirty-four chords, when Vere delivers the court-martial sentence to Billy, in full and de-mystifying view of the audience. Warner also presents Vere in the Prologue and Epilogue not as an old man near death. 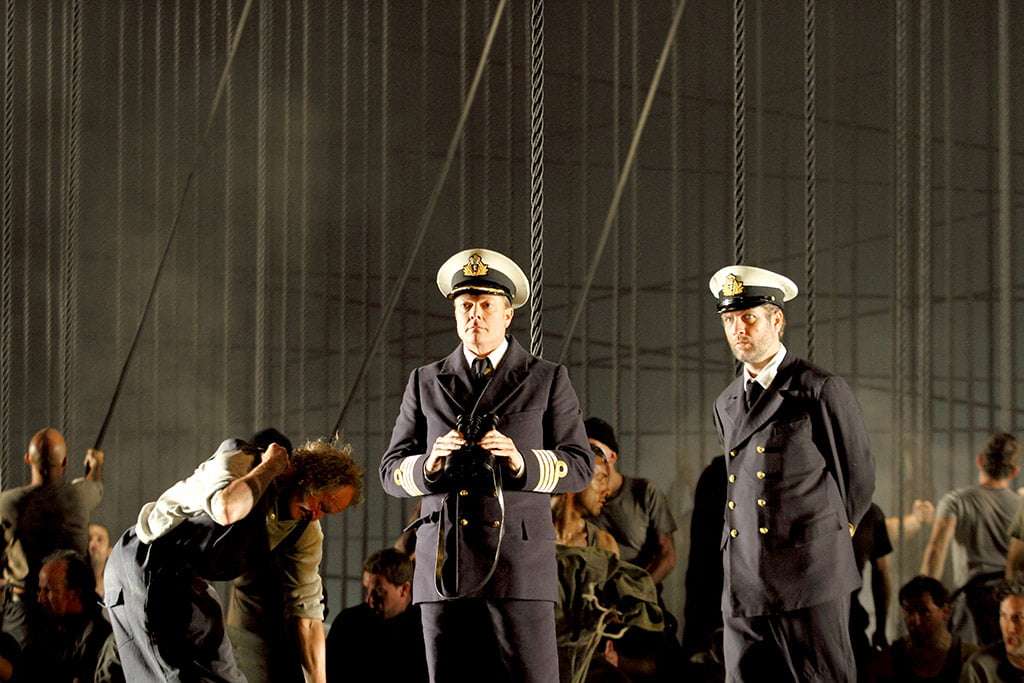 There is a host of stand-out performances in the smaller roles – a fine trio of officers from David Soar, Thomas Oliemans and Peter Kellner, a splendid and rippling Donald from Duncan Rock, Sam Furness goes from strength to strength in his intensely sung Novice, and there is an ambiguously motivated, beautifully sung Dansker from Clive Bayley. The men of the Royal Opera Chorus surpass themselves in full-on sound and exceptionally well-drilled movement.

Ivor Bolton’s conducting draws a marvellous response from the Royal Opera Orchestra in the seascape opening – an oily, neutral surface of strings with a few flashes of anticipatory activity, but otherwise Bolton only fitfully realises the ways in which this wonderful score expansively worms its way into the action and the libretto. I missed the impact of having the military drums tattoo on the stage itself – they are played from boxes either side – for the all-hands-on-deck opening of Act Two, and I got little sense of the transcendent tenderness, anguish and redemption implied in the chord sequence just mentioned. The distracted piccolo solo that limps through ‘Billy in the Darbies’ is brilliantly played, and I have never heard the percussion rattle that accompanies Billy’s stammer sound so like the warning of a rattle-snake about to strike and so appropriate.