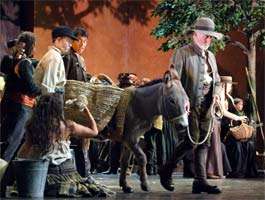 The Paul Hamlyn First Night of “Carmen” (3 October) made all the Royal Opera House seats available to Sun readers for a modest £30.00 each, as if to underscore that tabloid’s recent inclination to the right of centre. The second night confirmed that the audience would have got quite a show, in Francesca Zambello’s blockbusting, ultra-traditional production (its third outing here since 2006). It is very much in the crowded, Quality Street-verismo style of a lot of West End theatre – squadrons of well-drilled street urchins, a horse, a donkey, strutting matadors and picadors, abseiling smugglers. The hyperactive stage business perversely made getting to the point of “Carmen” – its hopeless, obsessive, one-sided love-affair – like wading through glue, but I suppose as an exercise in neatly micro-managed crowd control, it was impressive, however deadening the effect.

Carmen, the woman/animal at the centre of this tornado of testosterone, had a worthy exponent in Elīna Garanča, the Latvian mezzo in the fast lane to operatic superstardom. As a lodestar of lust, she looks the part, and her voluptuous sensuality is matched by her firm, even and powerful voice. She doesn’t quite have that direct line to Carmen’s unthinking, force-of-nature savagery, and there were moments when her control cut her off from the rest of the show; but her fatal confrontation with José was the real thing – violent, raw and tragic. 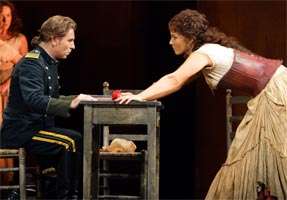 Liping Zhang also cut a rather isolated figure as Micaëla. Her two arias were meltingly sung, but Micaëla can be more than a sweet, pretty and passive victim. Ildebrando D’Arcangelo looked every inch the swaggering toreador, but his once-lustrous bass-baritone seemed underpowered. There were hints of his great form in Escamillo’s confrontation with José in Act Three, but his ‘Toreador’s Song’ lacked that vital, Formula-One macho posing.

What gave this “Carmen” its edge was Roberto Alagna’s Don José. Not only did Alagna interact powerfully with the rest of the cast, galvanising the sprawling, epic production into some sort of cohesion, he also gave a brilliant portrait of a supposedly alpha-male soldier, enfeebled and driven mad by desire and who can’t wait to throw his life away. His voice may have lost some of its sweet, lyric sheen, but his performance as a whole was electrifying.

In the smaller roles, Adrian Clarke and Vincent Ordonneau as the smugglers and Eri Nakamura and Louise Innes as Carmen’s gypsy friends stood out, and there a strongly drawn cameo from Caroline Lena Olsson as Lillas Pastia. Bertrand de Billy’s conducting gave us an immensely satisfying, faithfully detailed reading of Bizet’s doom-laden, sun-soaked score.