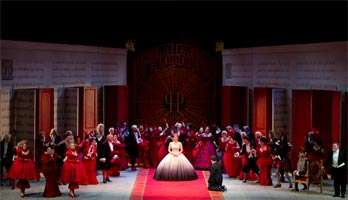 Jules Massenet’s operatic output does not suit all tastes. Cendrillon catches him at his most whimsical. It may not be sure box-office. Following Chelsea Opera Group’s concert performance a few years back it is good to see the piece on the Royal Opera House stage for the first time. Some will find Laurent Pelly’s production excessive and even misogynistic in its jokiness. However, he and his team have devised a visually pleasing and spacious setting in a room that can magically expand and contract. It has a large number of doors allowing multiple entrances and exits, seemingly rooting the action firmly in the realms of French farce. The walls of the set and its various scenic accretions are papered with the French text of the fairytale, and there are some visual gags – such as the ‘ironwork’ of the palace gates being an embellishment of the text “Les Portes du Palais” and Cinderella’s coach cunningly designed about the word “Carosse”. There is magic where needed and also contrasting darkness in the ‘enchanted forest’ of the third act – here the rooftops of the city. So, the atmospherics are in place. There are some, rather overstated, pokes at the debutante system, ‘finishing’ and contemporary fashion-design ‘culture’ which results in some ridiculous costuming of the female characters and which severely hamper their movement at times. Of course some of this is inherent in the tale, but the final Act’s procession of ladies trying the glass slipper is too similar to that of the second Act – the jokes have by then worn thin. 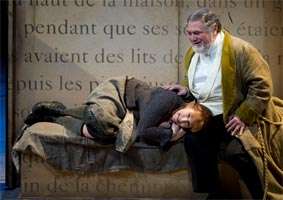 There are some fine vocal performances. Joyce DiDonato is an appealing and sympathetic Lucette, perfectly adjusting her vocal palette to match the very varied musical moods of Massenet’s music. She catches the doleful and anxious sides of the girl as well as her moments of happiness and elation. Her expressive facial features and strong presence help too. A treasurable performance. Alice Coote is a suitably boyish Prince Charming. She charted the character’s transformation from bored spoilt youth to desperately impassioned young man very well. She too knows how to colour her voice and inflect the text. That her dark-hued voice blends so well with DiDonato’s made their duets particularly lovely to listen to. When the two were joined by the ethereal top register of Eglise Gutiérrez’s fairy-godmother in the magical Trio that concludes the third Act there was magic indeed. Richard Strauss seemed close at hand! Gutiérrez handled her tricky role with aplomb – it was refreshing to have a voice with some richness to it as well as soubrette brightness. 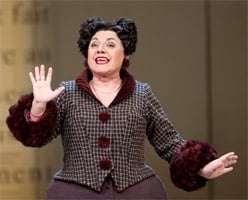 The comic elements in this operatic version of Cinderella are rather left to her father and stepmother and to a lesser extent the stepsisters. Ewa Podles, making a welcome return to the Royal Opera House after far too long an absence, was in ebullient form as the absurdly ambitious, domineering and snobbish Madame de la Haltière – her extraordinary vocal range, agility and colours and comedic ability all given their full rein. Her stentorian lower register remains impressively rich. Somehow she managed to retain a modicum of dignity despite her costuming. Her character’s amazingly brazen volte-face in the opera’s final moments was entirely in keeping with the rest of her portrayal. Madeleine Pierard and Kai Rüütel did what they could with the sisters; they could have been a little more differentiated. Jean Philippe Lafont was a sympathetic and put-upon Pandolfe dramatically though vocally his singing was somewhat dry and lacked tonal focus. He was often too loud in ensemble.

From the pit there was much to enjoy. The score abounds in pastiche – particularly of the baroque and classical pastoral. At times there are strong echoes of Lully, and then the score suddenly veers into the territory of Mendelssohn and from thence to post-Wagnerian chromaticism. The players of the Royal Opera House Orchestra seemed to relish getting their teeth into something frothy and heady. Bertrand de Billy kept the piece moving and contrasted the various soundworlds of the score nicely. The charged third Act packed the punch it should. The off-stage singing effects were well realised, the dances had a naturalness and lilt about them and the moments where Massenet indulges in some striking orchestral colouring were given their due. This is a lightly diverting evening in the theatre.

As a postscript, we need a new recording of Cendrillon, previously recorded complete only once before, albeit with a great cast including Frederica von Stade, Ruth Welting, Jane Berbié and Jules Bastin, if marred by the unauthentic presence of a tenor in the role of the Prince, even if it is none other than Nicolai Gedda.