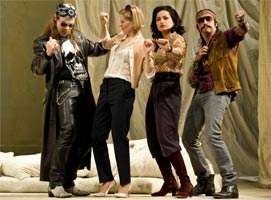 This is the seventh revival of Jonathan Miller’s production of Mozart’s ever-fascinating opera buffa. At the time of its premiere in 1995 it boasted much haute couture costuming when mobile phones and laptops were the new thing. With successive revivals the costuming has thankfully become less of a selling point, and less is made of it (though would Fiordiligi and Dorabella really change their outfits quite so many times in a day – especially when being traumatized by the departure of their old lovers and agonizing over the arrival of ‘new’ admirers?). Modern gadgetry still plays its part and the continuo mimicking of the Nokia ringtone is still a witty interpolation. Miller’s idea of having a sideways-facing full-length mirror on the stage throughout into which all the characters look and admire themselves or ensure they are ‘looking the part’ they are playing is a strong one, though it is slightly overused in Daniel Dooner’s otherwise-fine revival. He manages well to alternate the moments of buffo comedy whilst not blunting the serious and occasional distasteful aspects of the plot, and the ending is far from the easy resolution that Lorenzo da Ponte and Mozart intended. He is helped by having a well-balanced cast with a fine young quartet of lovers offset by a bitter Don Alfonso and assertive Despina. 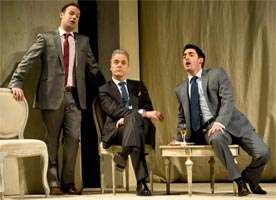 William Shimell’s Don Alfonso is certainly less genial than some previous interpreters in this production (one thinks of Thomas Allen). This is a rather unpleasantly cynical Alfonso, one who seems to have placed his bet with decidedly destructive intent. What had happened to him in the past to be so bitter towards the opposite sex, one wonders? He is not remotely likeable but Shimell’s acting and clever inflection of the text, especially in recitative, made him utterly compelling to watch. He was in solid voice, with his firm but wiry tone suiting the characterisation well.

Helene Schneiderman, a former Dorabella of this production, was a fine foil to him. She brought a great deal of light and shade to her performance. It was amazing how much humour she managed to make of props such as the takeaway coffee cup and doughnut, and indeed of the child-resistant cap of Dorabella’s medicine. Despina’s rather easygoing take on life and men, and her awareness of the nature of women came over strongly. Her doctor and lawyer impersonations were not overplayed, and she captured Despina’s disgust with Don Alfonso and the younger men. Her soprano still sounds very fine, even if the top has lost some of its bloom. ‘Una donna a quindici anni…’ caught her at her best. 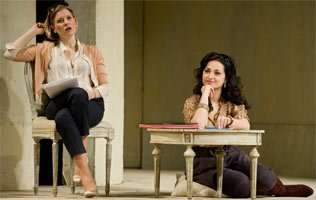 Sally Matthews was a fine Fiordiligi. The top of her voice remains strong and tonally ravishing, and she was certainly up to the florid and fiery passages of ‘Come scoglio’. ‘Per pieta’ was also very well sung indeed, with an appealing sense of introversion, although the lower-lying sections seemed to require her to force the tone somewhat. She looks great and Fiordiligi’s more-troubled acceptance of her attraction to her new suitor and feelings of guilt at betraying Guglielmo were charted well. There were some wonderful humorous touches, memorably so in the finale of Act One (I’m not going to spoil the fun!). There was also a nice sense of Fiordiligi’s sisterly relationship with Dorabella not always being the most harmonious. This Dorabella almost started to stray at the arrival of a potential suitor; Nino Surguladze, seemed to be too light of voice and dominated in duet and ensemble by Matthews, but she later seemed to find better projection of her lovely velvety voice. She sang ‘Smanie implacabili’ very well indeed, although here she was upstaged by other business, which was a pity.

Similarly, Troy Cook also seemed a trifle underpowered vocally but he too recovered to give a very positive impression in his Royal Opera debut. Guglielmo is the character who really expresses his feelings and there was a telling moment as he left Dorabella before the mock marriage to sit with Don Alfonso – perhaps indicating that he would soon follow down that cynical path and not recover from this experiment.

Charles Castronovo’s Ferrando has been seen in this production before and his warm Italianate tone and generous phrasing is always an asset. A little more pliancy was needed at moments in ‘Un’ aura amorosa’, but otherwise this was fine and felt singing. He was an important member of this generally strong ensemble of principals – and how such a team helps this piece.

In the pit Julia Jones conducted a spirited account of the score, although perhaps not that individual or revelatory a reading. Some of the playing was absolutely first rate; some breathtakingly exquisite clarinet-playing in the early sections of “Per pieta” stood out, although much of the woodwind interplay was strong. Mention must be made of Paul Wynne Griffiths’s sprightly and alert continuo.