The Orchestra of the Royal Opera House
Robin Ticciati 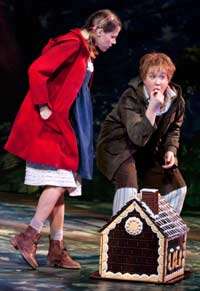 Can it really be 71 years since “Hänsel und Gretel” was last staged by The Royal Opera? This “fairytale” for all ages hardly seems to have fallen out of favour in recent times, though what was once a bourgeois indulgence par excellence has latterly become an allegory of child abuse that might give the most recalcitrant social services department pause for thought. Such was certainly not the case here though, as jointly devised by Moshe Leisner and Patrice Caurier, this new staging has its fair measure of conceptual ambivalence which itself confirms this as a production of the present age.

This is in part because the directors’ take on the opera’s mis en scène seems founded on the ‘so far, but no further’ principle. Thus the opening scene finds the eponymous duo trashing their bedroom to a degree that the Darling children in Peter Pan might not have found unacceptable, while the various characters encountered in the forest have more than a hint of 1970s’ BBC children’s television about them. The scaled-down model of the Witch’s house is a deft touch, not least in that it can be consumed as the action unfolds, but the depiction of its actual interior veers between the provocative – thus the pantry of hanging children – and the slapstick – thus Hänsel’s entrapment within a table – without much thought as to how these images might cohere as the visual component to what is being heard. 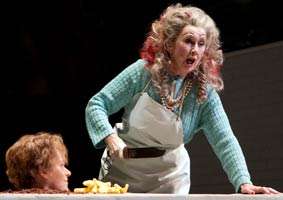 The Witch’s initial appearance in a state of semi-undress is pointless as an isolated (not followed up) incident, but her belated re-emergence as a life-size cake ‘for the eating’ is just what is needed to cap the kitchen’s previous explosion into life as well as making inventive use of catering resources. Seen in conjunction with Christian Fenouillat’s set-designs that are neither too modish nor too twee, Agostino Cavalca’s archetypal costume designs and Christophe Forey’s inventive lighting – at its best in the translucent shades of the orchestral interludes – this is a production which, while it may not quite add up, has sufficient visual and conceptual substance to balance that of the music.

As to the singing, that billed as Cast B is emphatically not reflected in its vocal quality. Alice Coote brings an appealing and appropriate ‘tom-boy’ aspect to Hänsel, as ready to get into scrapes as he is to rely on his sister to rescue him. Her often-reckless vigour is complemented by Camilla Tilling’s subtler but no less animated demeanour as Gretel, pointing up the level-headedness and essential dependability of the opera’s most sympathetic character. A quality to which neither of the parents really aspires, yet Irmgard Vilsmaier suggests at least a trace of humanity behind her vituperative facade and Eike Wilm Schulte likewise suggests a level of compassion for all his coarseness of manner (the parents’ tentative ‘getting down to it’ another image which is suggested without being pursued). 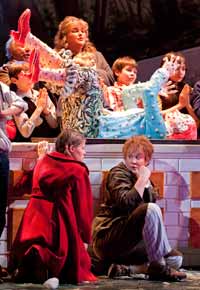 Otherwise, it is Ann Murray’s Witch that (rightly) steals the show: she is as concerned vocally as are Leisner and Caurier visually that the part avoid stereotype, her fullness of tone further ensuring that the role never descends into caricature so that her presence feels more ominous and unsettling as a result. Eri Nakamura is suitably disembodied as the Sandman, and Simone Mihai brings appropriate liquidity of tone to the Dew Fairy. The ensembles drawn from the Tiffin choirs leave little to chance in their stage contribution: the transformation from gingerbread to real children is consummately brought off, though their vocal accuracy and blend inevitably suffer with all this activity.

Along with subsequent Cast B (as well as one Cast A) performances, there was an auspicious Royal Opera debut from Robin Ticciati. Already an opera conductor of some experience (he assisted Sir Simon Rattle in the Salzburg production of “Peter Grimes” four years ago), his conviction suggests that, however closely he may have studied the score with Sir Colin Davis (who conducts Cast A), he remains very much his own man in terms of interpretative conviction. The Overture was enticingly rendered, thoughtfully but never indulgently phrased and with its rich underlying harmonies understated in emphasis, while the several important orchestral transformations were given ample but, again, not undue room to breathe. Moreover, Ticciati clearly has little problem in gauging his response to those of the singers, while the burnished and finely-attuned response he secured from the Orchestra was one to savour.

There has been speculation why Engelbert Humperdinck never repeated the success of this the first of his nine operas. Clearly the subject-matter holds an enduring appeal, by no means limited to German-speaking audiences, but the music too – in its unforced synthesis of Wagner, Schumann and even Dvořák – reflects much about ‘contemporary’ tastes now as 114 years ago. And, at one and three-quarter hours, it is long enough to fill an evening without taxing the patience of younger audiences. That so few of the children present showed signs of fatigue says much about the spell it continues to cast.