How the Whale Became
“Ted Hughes’s magical stories are transformed into a captivating new Royal Opera commission by Julian Philips and Edward Kemp”, based on The Dreamfighter and Other Creation Tales by Ted Hughes [world premiere performances] 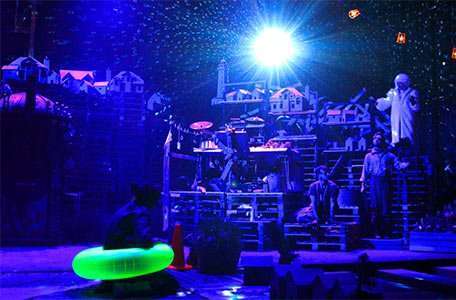 As is pointed out in the programme for the newly-commissioned How the Work Became, children are the cruellest of critics. Therefore the task of creating not just a fresh version of a well-loved set of treasured tales, but one designed to entertain and captivate a young audience through the operatic genre, could certainly be viewed as daunting.

In his cunning selection from Ted Hughes’s writings, Edward Kemp maintains a of mostly familiar characters, while ensuring much narrative flow throughout the 90 minutes of music. When combined with an utterly enchanting and highly detailed set, a selection of “found” instruments, a few pyrotechnics and a range of costumes that would shame a Vegas drag queen, this proves highly effective. From the moment we enter the mysterious, junk-strewn space – God’s disorganised allotment – we are engaged by the cast gardening, manipulating Heath Robinson-like objects, wandering across a set that encapsulates the rustic equivalent of steam-punk. Cauliflower-punk, let’s call it. Centre-stage is the Making Machine – the TARDIS-like garden-shed on steroids that creates each animal in a cloud of flashing lights, smoke and strange sounds. For the child in all of us, what’s not to like? 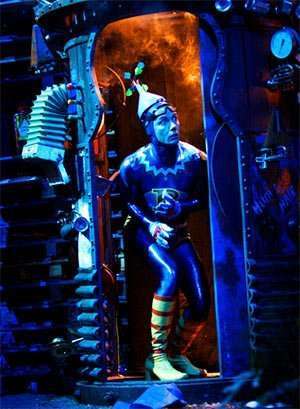 This natural world is refreshingly represented by the cast in a staggering array of costumes. Polar Bear emerges as a white fur-clad femme fatale surrounded by Secret Service seals, while Wild Bull preens in leather and a cowboy hat with revolvers for horns. Between countless slick changes of clothes, all five singers admirably convey the nuances vital to each character.

Njabulo Madlala – with his sonorous baritone and stately and accurate approach – perhaps most effectively matches his vocal performance to each part, with an Elephant who sadly mourns his lack of hair to a God (played at different times by each singer) only just on the edge of magisterial control. Next to him, Andrew Dickinson’s playful performance perfectly suited the role of Boy, with his innocence bringing a real sense of yearning to the beautiful love-duet in the second Act. Fflur Wyn’s shining, iridescent timbre gave Polar Bear a stylish cosmopolitan sophistication, and yet her astonishing vocal control brought devastating sadness to that duet.

Perhaps yet more notable were Donna Lennard, whose development as Frog through the evening was charismatic, and James McOran-Campbell, whose effortless stage presence and dramatic ability was wonderfully equalled vocally. At the opening Lennard appeared curiously diminutive, although always graceful, but as her character gained in ambition and guile her voice adopted a bright confidence, not least during the vocal gymnastics as Frog loses its identity – think Su Pollard meets Lucia de Lammermoor. And if this wasn’t enough, it appears that Lennard can also play the tin whistle while wearing rubber gloves. McOran-Campbell demonstrated astonishing range, dramatically and vocally, with an absolutely charming, all-controlling God, a menacing and malevolent Leftovers and an utterly resplendent Poor Thing with wonderfully camp vocal exhibitions while encased in a shining skin-tight outfit.

Curiously, the one element that appears less matched to this carnivalesque display is the music, but this is not necessarily a bad thing. Julian Philips’s score, from the opening dissonant accordion chords, never patronised or coddled us, instead opting for sonic minimalism. Although not derivative, there are nonetheless reflections of Copland, Britten and Leonard Bernstein in the harmonically open feel, with a tendency towards wide, ambiguous intervals, and the purity of the open octave. The most effective passages conjured tender, evocative images, allowing subtle character-painting. Flowerpot percussion, garden-hose horns, and the like, added a sparkle.

The creative team has surpassed the challenge set. How the Whale Became will appeal to children (of all ages) and their parents. On this particular evening, the vast majority of the audience was utterly enthralled.