Young Artists indeed but not students, each of these singers, plus the conductor, répétiteur (Volker Krafft is both) and director are “outstanding professionals at the start of their careers” and already contracted to The Royal Opera under the Jette Parker initiative. It goes without saying that if a house of the international standing as The Royal Opera invites you to join then the rungs of the ladder are being climbed big-time.

This Linbury presentation was somewhat behind-the-scenes, a rehearsal, if prepared to performance standard, the opera excerpts flowing one to another and using minimal props and with a dressing-room area at the back of the stage for make-up, hair-doing and changes of costume. In the small pit a piano and a conductor, Geoffrey Paterson on this first night, Volker Krafft for the following day’s matinee. 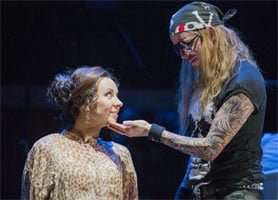 The opera’s chosen have all graced the Royal Opera House’s stage in recent months in full productions (review-links below). The first half was 45 minutes from the Mozart/Da Ponte trilogy. Once past some laboured recitative, Così (from Act Two) found the pairs of lovers having swapped partners – witnessed by the six singers not required – with some meaningful interaction and finding Madeleine Pierard vocally impressive and emotionally identified with Fiordiligi’s plight.

A short round of applause and Figaro followed immediately but without rush. ‘Non so più’ was breathlessly fast though, as it so often is, Hanna Hipp as Cherubino only just fitting the notes in (the one miscalculation of the evening). Energy was better disposed elsewhere and ZhengZhong Zhou was a nicely lascivious Count. The comedy was subtly revealed – so much better than laying it on with a trowel.

For Don Giovanni, the anti-hero was missing. Step forward Daniel Grice as a sappy-voiced and appealing Leporello who is clearly in a pickle but with a boyish charm to help get him out of the hole dug for him by his absent master. 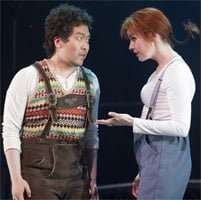 Anna Devin was an engaging Zerlina in the Don Giovanni scene and she came into her own in La Fille du régiment (the French-language part of the show). Given the intent of this Young Artists presentation, it is perhaps invidious to single out any one singer. Yet Devin shone like the star she is surely destined to become, for she not only has a distinctive, lovely and virtuoso voice, she is also a winning and captivating actress, here as Marie teasing poor old in-love Tonio, taken innocently by Ji Hyun Kim. In this duet Cupid’s arrow finally pricks both Marie and Tonio.

From the soufflé-like frivolity of Donizetti to the heart-rending tragedy of La bohème. And we got both barrels – Mimì’s final moments on earth, shared with Rodolfo, his fellow bohemians and the reformed Musetta, although one might question director Pedro Ribeiro’s decision to have them all with their backs to the lovers. Yes, it afforded Mimì and Rodolfo privacy but it also looked off-hand, and also questionable was the slow-motion sword-fight when the music itself is rapid, although a thoughtful and lively imagination was evident. Susana Gaspar was a bright-eyed and vocally expressive Mimì, such a sweet soul and very moving in her final declarations to her lover.

Inevitably the lack of an orchestra was conspicuous but not a drawback. David Gowland and Jean-Paul Pruna, alternating as pianists (and page-turners) were adept, stylish and sensitive accompanists (whoever played for the Puccini snippet commanded an ‘orchestral’ palate of sound that was impressive), and Geoffrey Paterson was a discreet presence while certainly being attentive to the performers and pianists as well as assured in his musicianship.

All in all this was an enjoyable and encouraging evening which brought talent and teamwork to the fore.