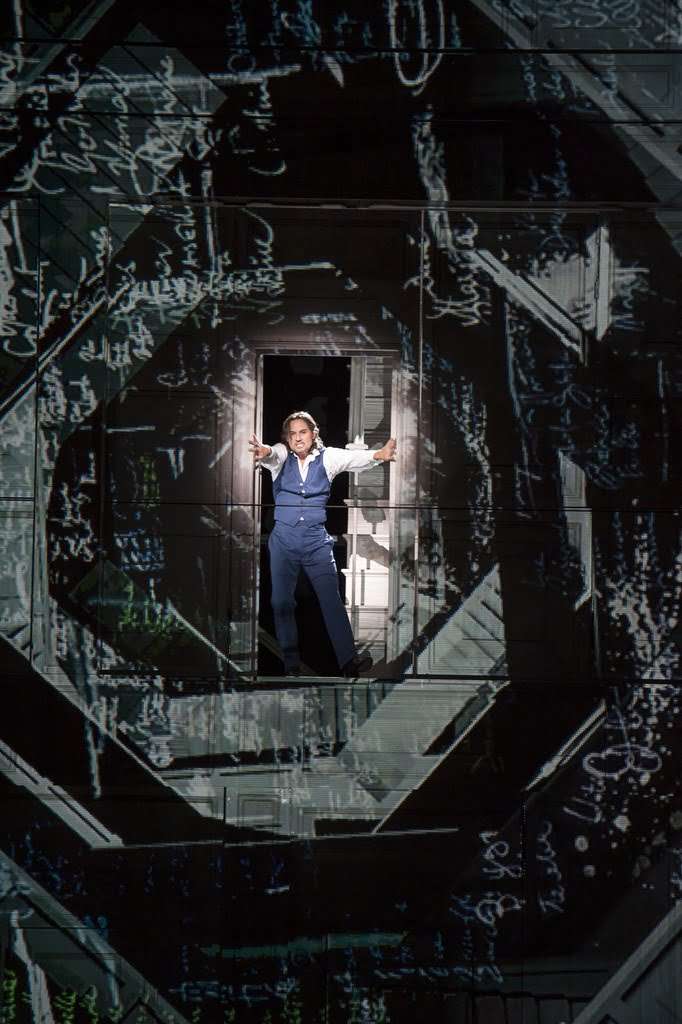 With a mostly new cast and conductor – Marc Minkowski bringing energy and grandeur to the pit – Kasper Holten’s 2014 Don Giovanni is in its second revival at the Royal Opera House. It’s a glitzy visual experience with eye-catching projections, and within the cast there are some strong performances and vivid characterisations.

At first glance the ink-scratched names of the Don’s conquests, spreading like a rash over the elegant two-storey facade, are seen to striking effect. But this scribbling appears throughout like a leitmotif and, along with images of tears, roses and blood, soon lose effectiveness, unnecessary reminders about Giovanni’s lechery. Ed Devlin’s main set is a slowly revolving cube in which rooms and stairs (the latter reminiscent of Escher’s architectural conundrums) draw the eye and give plenty of space for nefarious encounters, a masked ball (sumptuously costumed) and white-clad figures evoking the ghosts of women who have fallen prey to the infamous libertine.

Neither Kasper Holten, nor Amy Lane, make any pronouncements or moralise on the Don’s behaviour or that of the three women who are complicit in their relationships with him. Donna Anna (fully realising his identity) appears to enjoy his advances even after he has killed her father, and when her fiancé Don Ottavio shares burdens with her she slips away intent on betrayal. In Act Two Donna Elvira’s maid reinforces the absence of female integrity (or dignity) when she stands naked in front of Giovanni – should we interpret Holten’s wanton women as directorial misogyny or is this production just an age-old romp on immorality? Either way, it’s neither PC nor comic. By the end this Giovanni is not punished by the fires of Hell but left alone to confront his demons with the suggestion that an alternative kind of damnation is on offer for those who stray. Reinforcing this is the removal of the final sextet which Mozart sanctioned for the Viennese premiere in 1788.

Making a deeper impression are the singers, and chief amongst them is Mariusz Kwiecień. He makes a dashing philanderer, debonair rather than dangerous, but mostly convincing vocally; suaveness, crisp articulation in the ‘Champagne’ aria (ruined by swirling lighting effects) and velvet-smooth in the Act Two ‘Serenade’ (beautifully accompanied) where he generates a heart-stopping mezza voce.

Ildebrando D’Arcangelo is Giovanni’s long-suffering sidekick Leporello, part-servant, part-clown and part-wide boy and thoroughly in his element with the ‘Catalogue’ aria. Elsewhere, his rich-toned baritone is consistently ample and rewarding. Anatoli Sivko is a furiously resentful and strong-voiced Masetto, Willard White an implacable and gloriously resonate Commendatore and Pavol Breslik an effective and much-rejected Don Ottavio. Rachel Willis-Sørensen plays a heartless and somewhat poker-faced Donna Anna whose vocal agility and control is admirable, so too her intensity; Chen Reiss captivates as the none-too-innocent Zerlina; and Hrachuhi Bassenz gives a rounded portrayal as the spurned Donna Elvira sounding in her fury more like a mezzo.