Janáček
Kátya Kabanová – Opera in three acts [Libretto by the composer after Ostrovsky’s “The Storm”; sung in Czech with English surtitles]

Sir Charles Mackerras must have felt a sense of history when he took to the rostrum (to considerable applause) for the opening night of “Kátya Kabanová”: some 56 years ago he conducted the Sadler’s Wells company in the first-ever production of this opera – indeed, the first of any Janáček stage-work – in Britain. This third revival of Trevor Nunn’s 1994 production got off to a sound start that, more importantly, feels likely to yield its full potential as the run of performances progresses. 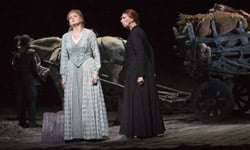 Nunn’s production – capably revived on this occasion by Andrew Sinclair – is a determinedly realistic one that neither imposes a conceptual overlay on the opera, nor motivates its emotions from within. Maria Björnson’s backdrop, with pathway and snowstorm fused into a Munch-like swirl, aptly sets the scene for what ensues but offers too little in the way of scenic flexibility or expressive enhancement as the work unfolds. The onstage appearance in Act Two of horses and cart is a crass and needless gesture, but the collapse of the scaffolding near the start of Act Three at least provides a striking visual anticipation of the opera’s denouement. Patricia Collins’s lighting is similarly straightforward and unobtrusive, and yet a more overtly interventionist approach during the last scene might have served to place the heroine’s suicide in more vivid and meaningful relief. Those seeing this opera for the first time, however, at least have a secure framework with which to experience it on future occasions.

The cast is a similarly secure one that evinces every sign of taking off onto another level. As Kátya, Janice Watson may lack the sheer presence of her Czech and Swedish predecessors, but her identity with the tribulations of Janáček’s most immediately sympathetic heroine is as clear as is the felicitousness of her vocal characterisation. The climactic scenes during the latter two acts are founded on just this quality, and Watson does not disappoint. Neither, as her hapless would-be-suitor Boris, does Kurt Streit – in a portrayal that marries his customary technical security to an emotional ardency less to be taken for granted. Their brief scenes together remain some of the most directly affecting in Janáček’s output, and can seldom have been realised with such tenderness as here. No less impressive is Felicity Palmer as the Kabanicha; moreover, she looks set fair to dominate what is the harshest and most unbending of the composer’s ‘mother-in-law’ roles well into the future.

The secondary roles are well taken, if not consistently so. Chris Merritt makes a convincing and not unsympathetic showing as Tichon, but his often-strained upper register undermines the assumption just when it needs to be at its most eloquent. No such reservations over Linda Tuvås’s portrayal of Varvara – one that captures the adolescent’s innocence yet manifest shrewdness in tones that are a constant delight. Toby Spence has the required fervency and sometime recklessness as her lover Váňa (indeed, the roles of the secondary lovers can rarely have been so appealingly taken), while Oleg Bryjak contributes an uncouth but humorous Dikoj and the ever-reliable Jeremy White is an appealing Kuligin. The Royal Opera Chorus makes its presence felt with a suitably ominous touch.

Otherwise this is Mackerras’s performance – and the conviction that led him to champion Janáček in general and this opera in the first instance shows no sign of deserting him. What intensity but also subtlety he brings to the prelude – an encapsulation of the ensuing drama such as the composer equalled but never surpassed, with the tensile cohesion of each act indicative of the dramatic mastery at which Janáček had arrived. A few details, not least the stark closing chords, seemed a shade under-strength, but here – as in other respects – the performance is sure to get into its stride as the run unfolds. Musically, then, this is a welcome and worthwhile revival. BBC Radio 3 broadcasts the ROH production on 20 October; meanwhile Chandos issues Mackerras’s third recording (sung in English) of “Kátya Kabanová” on October 1.