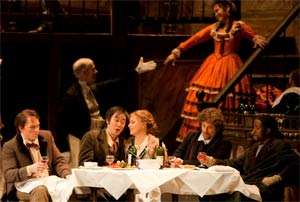 Enormous pleasure was derived, once again, from attending this production of Puccini’s touching tale of lovers torn from each other – and brought together (Musetta and Marcello) – by way of a stunning performance from the Royal Opera House Orchestra, through Julia Trevelyan Oman’s hyper-realistic designs, and (returning to his 1974 staging, in its twenty-third revival) John Copley’s meticulous and busy direction. There are numerous venerable productions that have had outings in recent years – a 1984 staging of “Der Rosenkavalier” and “Les Contes d’Hoffmann” from 1980, both directed by John Schlessinger, as well as Piero Faggioni’s “La fanciulla del West” from 1977 – and all have proved that their audiences still relish such pieces of theatre. So much so, in the case of “La bohème”, that Act Three received by a round of applause, perhaps because the snow falling outside the opera house was matched beautifully by that falling on the stage.

Maurizio Benini, engaged for just the last four performances of this current run, is an ideal choice for Puccini’s harmonious music. The obvious delight and affinity that he has with the music shone through, with orchestral details brought out afresh. Act One found contrasting lush and frolicking textures, the whole bathed in moonlight, anticipating the tragedy about to unfold. Surprisingly, Act Two, with its hectic goings-on, lost some of its innate theatricality, but Act Three’s forgiveness and nostalgia, reconciled matters in fine style, before the drawn-out heartbreak, mixed with hopelessness, of Act Four. The closing orchestral outbursts were wrung for everything possible, and mixed pain with repose. Truly moving. 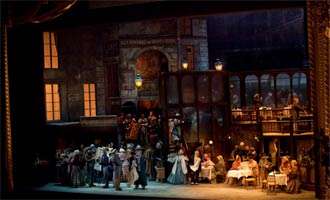 What a pity the singers were not always up to the challenge. Singing only his second Rodolfo was the inadequate Ji-Min Park. His voice lacks resonance and his projection was found wanting. The notes are there, but the volume, modulation and stamina are sorely lacking; his acting was rather wooden, too. His love-interest Mimì (Lucia) was sung by Rebecca Evans, marking her Royal Opera debut in the role. It was a nervous start – mirroring her apprehension when entering the bohemians’ attic – and Evans’s voice suggested it was too small, more suited to Pamina or Zerlina. But, all her instincts were honed, as her account in the last two acts displayed, and it was her ability to show off a dramatic core that made her interpretation successful.

Christopher Maltman’s Marcello, the painter, was the only other singer who distinguished himself. It is a role his is familiar with, and, having the opera’s first words, he announced himself as being fully in command with a lively portrayal. Eri Nakamura (Musetta) fretted and was hamstrung by poor elocution; Vuyani Mlinde (philosopher Colline) only became noticeable when serenading his coat and Simone Del Savio (musician Schaunard) needed to make much more of the little he is given. Even Jeremy White, as the landlord Benoit, failed to inhabit this role that he has made his own at Covent Garden.

However, the orchestral contribution under the estimable Benini, and Rebecca Evans’s Mimì, made this night more than worthwhile. There is always talk that much-loved productions are about to be ditched, and Copley’s of “La bohème” is no exception, though it is worth noting that the only other Royal Opera production dated from 1897 and was retired in 1973!